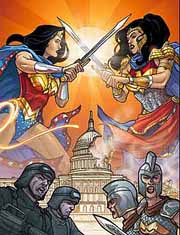 Via the Occasional Superheroine website, we find this survey:

Starfire’s treatment in Countdown to Adventure 12%

It disturbs me that so much of this is DC — when I worked there, we seemed to be the more progressive publisher of the Big Two.  The Editor-in-Chief was a woman, and there were several women editors who had some authority.

While I’d quibble with some of the selections here, that’s really not the point.  The point is that the publishers of the largest-selling American comics would appear to go out of their way to alienate half the population.  And that half of the population seems quite happy to buy manga, in bookstores, where they find themselves appreciated as valued customers.