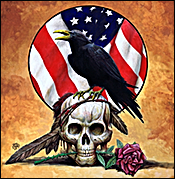 Excuse me if this week’s profundity seems a bit more extemporaneous than usual. It’s been one of those weeks, and at 3:00 yesterday morning Roscoe The Cat literally saved my life and I’m still twitching over that one.

I listen to music all the time. Literally, all the time. I have a very wide range in taste, but most of what I listen to falls under the exceptionally broad category of “kick ass rock’n’blues.” It’s a phrase I use on Weird Sounds Inside The Gold Mind, my weekly radio indulgence on (ahem) www.getthepointradio.com. Right now, I’m listening to Sterling Koch’s 2010 effort, Steel Guitar Blues. Kick ass music energizes me and takes the pressures of the day and it puts them over there, wherever there is. Music is my drug of choice.

A lot of my friends in the comics racket have a similar relationship to rock’n’blues – it’s crack for those of us with short attention spans. Topping that list is my Team GrimJack mate and awesomely dear friend, Timothy Truman. He’s turned me onto more great music than anybody outside of the amazing disc jockey Terri Hemmert (WXRT; they stream live and are on most of the radio apps). The difference is, it’s Terri’s job to turn us on to music. Timbo’s job is to sit at his drawing board and his computer and knock out the greatest comics the world has ever known.

The energy and the ambiance of kick ass rock’n’blues is reflected in Tim’s work – every damn panel of it. He’d probably do more comics work if he weren’t the artist for The Grateful Dead, and his work as graced the cover of many a recent GD release. He’d probably do less comics work if he had decided to make his career commitment the guitar: he’s one of the finest guitar players I have ever heard. That’s a lot to say, as I spent more than three decades in Chicago and I lived near many of their classic blues clubs. Timothy has jammed with Carlos Santana and Bill Kirchen and sundry of the Dead and a million others and, let me tell you, from the tapes I’ve heard nobody ever had to carry him.

Having worked with him on a zillion projects in the past 30 years – that’s 30 years this year – I can now reveal a secret: I stole Timbo not from TSR, where he was employed prior to Starslayer and GrimJack, but from the world of rock and blues… and for this, I feel guilty.

There are others whose work reflects the energy and spirit of the sound. Lots of so-called underground guys like George Metzger and Rand Holmes and Greg Irons. Erik Larson has more than a bit of that going for him. Howard Chaykin, but not so much rock’n’blues as Hoagy Carmichael and Billie Holiday by way of David Bowie. 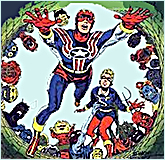 But no one ever captured the spirit and the energy of kick ass rock’n’blues the way Jack Kirby did. You could see the shift in his style around the time rock’n’roll hit the airwaves in the mid-50s (check out his Fighting American), and when it came time to co-create the Marvel Universe, well let me tell you, Galactus and Doctor Doom and the Silver Surfer and the negative zone and… well, you get the idea. Pure rock energy that carried over to his Fourth World stuff at DC.

Here’s the part that I find overwhelming: there is no recorded evidence that Jack Kirby was a fan of this music, or that he even liked it. He met a few rock’n’rollers; he met Frank Zappa, for crying out loud. But if this isn’t the creative coincidence of all time, then there was something in the air that only Jack Kirby and a couple thousand musicians could inhale.

By the way, I’m now listening to the new album by the Tedeschi Trucks Band, Made Up Mind. And yeah, Timothy Truman turned me on to them. Then, I think some rockabilly. Or maybe Bo Diddley.

(Poster artwork by Timothy Truman in promotion of a 2009 Grateful Dead tour, and the Simon and Kirby piece is from Fighting American. Both are probably copyright by somebody appropriate. Oh, yeah. All Rights Reserved. So watch yer ass.)