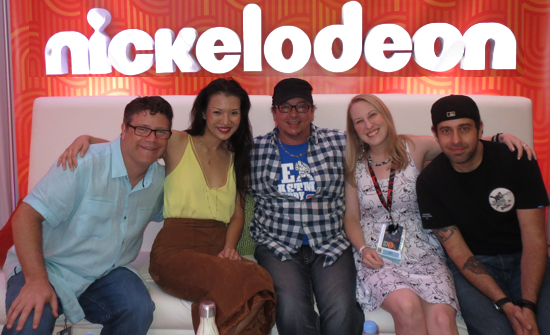 As you undoubtedly know, San Diego’s Comic-Con International happened this past weekend, and I was fortunate to be amongst the tens of thousands of attendees. There was, as always, a mega-ton to see and do, and it was hard to keep the FOMO (Fear Of Missing Out) from getting completely out of control over the 4.5 days of the con. To stay sane, though, at some point you just have to accept that you’re going to miss a bunch, and focus on what you do have the opportunity to see.

This year, one of my main interests was what Nickelodeon was showcasing. Of course, Nickelodeon is always on my radar, and particularly the current Teenage Mutant Ninja Turtles animated series, which I adore. But even beyond the coolness that is the TMNT, this year, Nickelodeon was focusing on its past – in the best way possible. Through its late-night programming block of “The Splat,”  which has been airing from 10 p.m. to 6 a.m. on Teen Nick since it took over for “The ‘90s are All That” late night programming in October of 2015, Nickelodeon has been tapping into the deep, deeeeeeeep nostalgia that a lot of us have for shows like Clarissa Explains It All, Aaahh!!! Real Monsters, Double Dare, All That, Doug, Hey Arnold!, Legends of the Hidden Temple, Ren and Stimpy, Rugrats, You Can’t Do That on Television, and more. And given that all of those shows were amongst my favorites growing up, I just love that, and was looking forward to experiencing some nostalgia up close and in person.

Of course, for SDCC people are always going to want to see what’s new. But since this is the 25th Anniversary of Nickelodeon Animation; Nickelodeon’s upcoming movie lineup includes updates and sequels from popular ‘90s properties – including Hey Arnold! and Legends of the Hidden Temple; and “The Splat” has proven to be a hit, it made sense that to celebrate that. Therefore, Nickelodeon’s Comic-Con 2016 celebrated the ‘90s with “an immersive retro experience” at its booth, panels, and party.

The booth was a well-set-up and eye-catching blast from the past. It featured a virtual reality experience and King Olmec head from Legends of the Hidden Temple (on which the King was voiced by the ever-talented Dee Bradley Baker), and the King’s head was festooned with 3-D characters from classic shows like Rugrats, Ren & Stimpy, CatDog, Rocko’s Modern Life, and Aaahh!!! Real Monsters. There was also a backdrop area where you could get photos with characters from shows like The Fairly Oddparents. The signing area and schedule included everyone from the TMNT to the cast of All That to legendary creators of the animation world. To purchase merchandise, you went up to windows set in the lenses of the purple glasses that bespectacled a giant Chuckie head from Rugrats (the only thing that would have made it better would have been if you could actually go inside Chuckie’s head. Next year’s virtual reality experience, Nickelodeon?). And, to top it off, the setup featured photo ops with the Hey Arnold! stoop and the original giant nose and red glasses from Double Dare. The merchandise on offer was also cool – including The Nick Box (similar in idea to LootCrate and other monthly “mystery boxes” of merchandise), which featured items from classic Nicktoons for its first release.

Nickelodeon’s panels this year included “Happy Happy! Joy Joy!: 25 Years of Nickelodeon Original Animation,” “Teenage Mutant Ninja Turtles — Return to New York,” “She Made That?: Nickelodeon hosts Women in Animation,” “ and “Back to the ‘90s: Nickelodeon’s All That Reunion and Legends of the Hidden Temple!” They all sounded amazing, but even my FOMO couldn’t bend time and space so that I could experience them all. However, I did get to attend the first two panels, and had the privilege of sitting down with the panelists for interviews.

“Happy Happy! Joy Joy!” featured Craig Bartlett (Hey Arnold!), Jhonen Vasquez (Invader Zim), Butch Hartman (The Fairly OddParents, Danny Phantom) and Arlene Klasky, who along with Gabor Csupo and Paul Germain, created Rugrats. It was great to hear these innovative and clever creators talk about bringing new ideas to fruition and developing their shows over the years, as well as looking forward to future projects (such as Hey Arnold!: The Jungle Movie, which Craig Bartlett discussed, and for which we saw some cool production art. We also learned that the movie will finally answer the question of where Arnold’s parents are). Butch Hartman showed animation from his latest show, Bunsen is a Beast! And we got to see a TMNT short, Don vs. Raph by Jhonen Vasquez, that was awesome in its absurdity.

I was fortunate to sit down with Craig Bartlett, Butch Hartman, and Arlene Klasky before the panel as well, for a great chat about their careers and work. You can watch the interview here!

“Teenage Mutant Ninja Turtles — Return to New York” was, as always with the TMNT panels, a total joy. I love this show and everyone involved with it; and this year, we got to meet a new guest, Gwendoline Yeo, who voices new character Shinigami in the upcoming season (airing Sunday, August 14, at 11 a.m.). I also was glad to hear from Mae Whitman, who has been voicing April O’Neil since the get-go, but whom I’d not gotten to see on a panel before (every time she’s been on one I’ve missed it somehow) and from TMNT co-creator Kevin Eastman (likewise). And what TMNT panel would be complete without executive producer Ciro Nieli, and more amazing voice talent like Rob Paulsen (Donatello), Sean Astin (Raphael), Greg Cipes (Michelangelo), and Eric Bauza (Tiger Claw). We missed executive producer and head writer Brandon Auman, but apparently he was hanging out at the Sistine Chapel, so I guess that’s an okay reason to miss a Turtles panel. Maybe.

At the panel they showed the entire first episode of Season 4, which introduces Shinigami and features some really cool development of April’s story, as well. I hate to use a cliché and say that Episode 1 was all about girl power, but: well, it was, and that was fun! I like how far April has come in the show; and I’m very curious to see more of Shinigami’s backstory with Karai, who we also caught up with. We also got to see a couple of fun TMNT shorts, which you can watch too! The first was Pizza Friday by Kevin Eastman and Paul Jenkins, and the second was Turtles Take Time (and Space) by Brandon Auman. I loved them. Booyakabunga!

I was happy to be able to sit down for interviews with the Turtles folks before their panel as well. You can check out my interview with Greg Cipes, Rob Paulsen, and Eric Bauza here; and my interview with Gwendoline Yeo, Sean Astin, Kevin Eastman, and Ciro Nieli here.

And as cool as everything I’ve just talked about was, there was one more totally rad thing I experienced with Nickelodeon this year; and that was the Nickelodeon Double Dare Party with Marc Summers! It took place at Fluxx Nightclub, and was just So. Much. Fun. For one thing, they literally hosted a mini Double Dare show right on the dance floor – where the obstacle course from the show and physical challenges were set up. To make it even better, the Red Team and Blue Team were composed of great players like Nickelodeon staff, and voice actor Greg Cipes (Michelangelo on TMNT) who had been on the show as a kid. And of course, to make things really authentic, the show was hosted by Marc Summers, who didn’t miss a beat as he ran the teams through their paces (watch it here!). It was super-cool to be “on set” for the show and watch the Blue Team win it all live.

For another thing, it was fun to have some chill time with some of Nickelodeon’s great talent– including folks from the panels like Craig Bartlett, Butch Hartman, Greg Cipes, Eric Bauza, and Ciro Nieli – and to get to know more of Nick’s cool staff. And finally, after the Double Dare show ended, they cleared the dance floor for some totally ‘90s DJing, and we all had a rockin’ time dancing and being completely unembarrassed at knowing, for instance, all the words to the Spice Girls’ “Wannabe.” (Wow, it had been so long since I’d sung that song.) My one complaint about this party is that the dancing ended too soon! And on top of all of that fun, I give high praise to the snacks at this party (especially since I’m always dying of hunger at the end of a busy day at Comic-Con) which included mini burgers, fries, shakes, and eclairs. Small but substantial food, easy to eat, and totally in theme.

All in all, Nickelodeon killed it this year at Comic-Con, and it wouldn’t have been the same without ‘em. I’m already feeling the nostalgia for Comic-Con 2016 and all the Nick fun I had there (which you can see in my photo album here). But that doesn’t mean I can’t wait to see what they do next year, too!

Stay tuned for tons more SDCC reporting from me, and until next time, Servo Lectio!