The third installment of the rebooted Star Trek franchise, Beyond, is set to hit theaters July 22nd. It’s been announced that in this film that Hikaru Sulu, portrayed by actor John Cho, will be revealed as gay. John Cho apparently discussed this with George Takei last year, in which Mr. Takei expressed his displeasure with the idea and lobbied film director Justin Lin to reconsider the decision to make Sulu gay. The movie was written by Simon Pegg, who plays Scottie, and Doug Jung. The Star Trek Beyond team went ahead with their original idea anyway.

Now there is a lot to unpack here. Why would an openly gay man and LGBTQ activist like George Takei be opposed to Hikaru Sulu being portrayed as gay in the new movie? Part of the reason is in this quote from George Takei himself, “Unfortunately, it’s a twisting of [‘Star Trek’ creator Gene Roddenberry’s] creation, to which he put in so much thought. I think it’s really unfortunate.” He goes on to stress that this is the 50th anniversary year of Star Trek and how that adds to the unfortunate nature of it all. Simon Pegg goes on to counter that stating the decision to make Sulu gay is in line with Gene Roddenberry’s vision.

Roddenberry himself did want to have LGBTQ representation, but at the time he was helming Star Trek that was impossible. George Takei’s point is not that Gene Roddenberry would be opposed to a gay character in his vision, but rather that Gene thought out all of his characters so fully that if they want to include a gay character that character should be a new one.

At this point I can’t help but think to myself just who in the hell does Simon Pegg think he is? George Takei worked closely with Gene Roddenberry for years. They talked about the character of Hikaru Sulu many times together. Simon Pegg has never worked professionally with Gene Roddenberry. It was incredibly poor form for Simon Pegg to try and counter George Takei’s claim that this goes against Gene’s vision. Honestly, I found it insulting on Simon Pegg’s part. He’s a professional and he should know better.

Going back to George Takei as an LGBTQ activist and how that and his sexual orientation inform his worldview, I think it’s very important to consider that before responding in the way that Simon Pegg, as well as Zachary Quinto did. Not only is George Takei a member of the LGBTQ community, he is also a member of the Asian community in the United States, another minority, and he and his family were subjected to life in an internment camp from 1942 through the end of World War II. Later, he would have to navigate being a closeted gay man in Hollywood. He is a man who has gone through a lot, experienced a great deal, and deserves more thought and consideration towards his ideas than was given to him by the team on Star Trek Beyond.

Simon Pegg is not a member of the LGBTQ community. He is an ally at best. His statements echo those of many other well-meaning allies who have not necessarily contributed positively to the community. I’ve written previously about Iceman being outed in Marvel Comics and was strongly opposed to the idea then. What they have done with the character since has not been positive in any measurable way to me and I stand by my thoughts on Marvel’s decision. The situation with Sulu in the new franchise is very similar.

When it came to Marvel outing Iceman, it came off like cheating at the diversity olympics. Same goes for what Simon Pegg is doing with Sulu. Taking an already established character with a fan base and adding something to that character to make them more diverse comes off as a way to try to add diversity without the risk, and we see right through that. Rather than make an investment with a new character, they’re trying to play it safe and it comes off as lazy more than anything else. I will say it’s nice that Star Trek is at least creating a non-white LGBTQ character through this, but this is still not ideal. 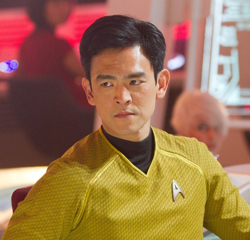 We need new characters, our own characters, histories and stories, not press releases with straight cis white allies patting themselves on the back congratulating themselves on how progressive they are. Especially when one considers how forward thinking Star Trek was in 1966, and how 50 years later we haven’t even had a single gay character of any importance, let alone bi or trans. The Star Trek franchise went from being something of a gold standard in diversity to falling behind compared to contemporary science fiction. They shouldn’t be patting themselves on the back for how progressive they all are, but rather they should be apologizing to us for having taken so long to even attempt to catch up and that all they can offer us is a lazy Sulu reveal.

Something equally important is LGBTQ representation in the background. It’s not enough just to have just one character in the movie represent an entire group of people. It all needs to be sprinkled into the background. How about two women flirting in the break room? Maybe someone has an image of their same sex partner at their workstation. What about a background character just bringing up their same sex partner casually in conversation as someone they’re looking forward to seeing again soon when they get back?

We need to be a part of the greater world. If queerness is not a part of the background, it is not a part of the world. It’s just a token character. The kind of character Simon Pegg claims to be against. His actions suggest otherwise. Especially since Simon Pegg also states that while Sulu is out as gay in this movie that it isn’t important to the story. Straight allies often seem to go back and forth between saying how important it is to queer people like me that they created or retconned a gay character followed immediately by saying the character’s queerness isn’t all that important anyway. It’s insulting and honestly I’m really sick of hearing that.

If this was something important to the people involved in the reboot, they should have made characters LGBTQ from the start back in 2009. By waiting until the third installment, it becomes very difficult to believe this is for anything more than a press hit. Granted, Simon Pegg was not involved in the screenwriting for the previous installments. That said, it’s all the more reason to just create a new character to develop and grow. I find it offensive that Simon Pegg suggests that creating a new character that is gay would mean that the character is just there to be gay. He’s a screenwriter. He should know better. He should know you can create new characters and clever writing can avoid tokenism.

Everything stated by John Cho, Simon Pegg, and Zachary Quinto suggests to me that some people on the film thought that George Takei had gotten big enough on social media that they could lazily write up one scene in a movie showing Sulu with a same sex partner, and assumed that of course George Takei would love the idea because he’s gay and it would be great press. When they found out that the LGBTQ community is a little more complicated than that, rather than listen to George Takei they went ahead anyways in the hopes that he would come around or that Sulu being gay would be a good free press. George Takei did not come around to the idea.

I’m disappointed with Justin Lin, Simon Pegg, and Zachary Quinto. I’m a queer nerd who is a casual fan of the Star Trek franchise. I’m sick of being targeted for marketing that’s not so much for me, but for people outside of the queer community to feel better about themselves. I saw both of the previous Star Trek films in theaters, but after this debacle I’ll be saving my money. I’ll wait to see what Bryan Fuller’s new Star Trek television series premiering next January has to offer.