A Doctor A Day – “The Girl In The Fireplace”

For a person as long-lived as The Doctor, all his relationships seem to go by quickly.  This one goes by REALLY quickly…for him, that is.  But quite a long time for…

“What do monsters have nightmares about?”  “Me.”

A young  woman in 18th-Century France is calling into her fireplace for The Doctor.  And after the opening credits, the narrative shoots 3000 years later, where the TARDIS lands on a spaceship light years from Earth.  Mickey is fascinated at the view, Rose is enjoying showing him the ropes, and The Doctor is wondering why there’s an antique fireplace in a derelict spaceship.  Looking into the hearth, he is rather surprised to see a young girl named Reinette looking through the other side.  She is even more surprised, because her side of the fireplace in in 18th century Versailles. After a brief talk, he examines the fireplace, and finds a latch, causing the whole thing to rotate around to the other side, into the 18th century.  The young girl is there, but she explains confusedly that their chat was months ago.  The Doctor examines the room briefly, noticing the clock on mantle is broken…but he still hears ticking.  He finds the sound under Reinette’s bed, and discovers a mysterious figure, clearly from the ship, but clad in period dress.  The creature has been scanning Reinette’s brain, and The Doctor can’t imagine why they’d expend the energy to cross time and space to scan a seemingly normal young girl.  Rather than spend time placing her in danger, The Doctor lures the thing back over the fireplace portal and onto the ship, quickly incapacitating it.  It’s an intricate clockwork android whose design The Doctor can’t help but admire, but it teleports away before he can inspect it. 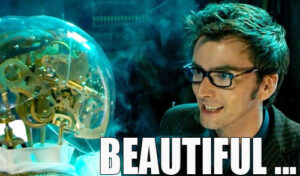 Telling Rose and Mickey to stay put (because that ALWAYS works), he spins the fireplace back around, only to discover that Reinette has grown in QUITE the attractive young lady…specifically, the one we saw calling for hope in the pre-credit sequence.  She chats with him, catching up with her childhood friend, and plants a quite passionate kiss on him.  It’s only after she leaves, and he’s confronted by a guard that she realizes that young Reinette is the Madam du Pompadour, possibly one of the most famous (certainly the most successful) courtesans in human history.

Back on the spaceship, Mickey and Rose are off exploring, and The Doctor finds a horse, clearly having wandered onto the ship through another transfer point between the ship and Versailles. Walking through that one, The Doctor sees his now slightly older and even MORE hot friend in the garden of the palace. Meanwhile, Mickey and Rose have discovered that human body parts have been used to repair and maintain the ship – a human eye in a camera and a heart running as a pump.  The part they need the most is Reinette’s brain, which they will take on her thirty-seventh birthday.

Why does a spaceship from 3,000 years later think the brain of a French courtesan will be compatible with its computer system?  Well, that is a rather good bit of the story.

This is one of Moffat’s best episodes, mixing the complex time-travel plot that he will soon become (in)famous for, and a simple love story. Others clearly thought so as well, it’s the first of his Hugo wins for the show as well. What’s interesting is that he really only spends a couple hours with Reinette, but it’s across most of her life.  We’ll see this theme pop up a couple times – it’s basically the same way the Eleventh Doctor met Amy Pond.  And the idea of the out of sync timelines will re-appear with Amy again, in The Girl Who Waited.

The sets were built in a very unique way for this episode.  The spaceship and bedroom sets were actually next to each other, so the fireplace could actually rotate between them.  The rest of the rooms of the palace connected as well, for the various moments of moving between rooms.  One of the most complicated effects shots in the episode was The Doctor crashing through the mirror.  A number of elements, including CGI glass, the jump being done at a different location, and all the people in the room.  Sometimes the stuff that looks the best and takes the longest doesn’t look like an SFX shot at all.

In what is becoming a new industry trend, British journalists were treated to a look at about 20 minutes of footage from JJ Abrams’ Star Trek coming May 8, 2009.

In providing the image, Abrams spoke about watching Star Trek: The Motion Picture in 1979. "The coolest thing about it — maybe the coolest thing in the movie — was when you flew around the ship, you could see all the different panels that made up the ship," he told the magazine. "It was the first time I had ever seen that level of attention, that love of detail, given to the tangible, practical reality of the ship."

Meantime, Den of Geek and Empire Magazine both provided extensive descriptions of the footage along with commentary.

“A very disarming Abrams himself was there, as was Simon Pegg, the new Scotty; both were on-form but clearly very nervous, and both addressed the gathering, Abrams at length,’ Geek wrote. “ He may be right: the viewing started with the new trailer, which will be in cinemas Friday, followed by four scenes from the movie itself, all complete with polished SFX and scoring.

“And it all looks absolutely amazing.”

Empire wrote “any reservations we may have harbored over JJ Abrams’ reimagining of the franchise have been well and truly beamed away. What we saw was a medley of action, excitement, humor and a true reverence for the franchise that should both appease fans and suck in newcomers.”

END_OF_DOCUMENT_TOKEN_TO_BE_REPLACED

Heroes star Masi Oka will be serving as global ambassador for the non-profit One Laptop Per Child initiative headed up by MIT Media Lab’s Nicholas Negroponte, which has set out to design, manufacture and distribute laptops to developing countries for under $100 each.

The Brown University Math/Computer Science grad is a dual threat in the digital space, known not only as an actor but also as a SFX guru with George Lucas’ Industrial Light & Magic.

Eddie Campbell tries to define what a graphic novel is. (Illustration of Campbell deep in thought by Campbell.)

The LA Times has an article about the webcomic A.D.: New Orleans After the Deluge.

Comics Should Be Good takes their usual monthly look at Marvel’s December covers.

Newsarama talks with the creators of Punks: the Comic.

The CBC interviews For Better or Worse cartoonist Lynn Johnston.

Reviews from The Savage Critics:

END_OF_DOCUMENT_TOKEN_TO_BE_REPLACED

Newsarama has discovered the exisitence of Triple-A Baseball Heroes, in which Marvel superheroes apparently battle villainy in tandem with minor-league team mascots. (The cover is our illustration today.)

Ain’t It Cool News reviews a pile of recent comics, starting with the Booster Gold relaunch.

CHUD’s Thor’s Comic Column presents reviews of comics by several people, none of whom are actually named Thor.

The Daily Cross Hatch reviews Fletcher Hanks’s I Shall Destroy All the Civilized Planets.

Comics Worth Reading reviews To Terra by Keiko Takemiya.

Greg Burgas of Comics Should Be Good also reviews this week’s comics.

Comics Should Be Good’s Brian Cronin looks at the first issue of the second series of Mouse Guard.

What is Star Wars were a musical? Let’s Blow This Thing! might just be the result. [via Extra Life]

Locus Online lists the new books that they saw in mid-August.

Jeff Somers’s new book The Electric Church now has its own website.

END_OF_DOCUMENT_TOKEN_TO_BE_REPLACED

Comic Book Resources looks back at the long, odd history of the Metal Men.

If you’re like me, and spent much of the weekend in the company of kids watching a Naruto marathon, you might also find this Paul Gravette lecture about Naruto to be useful in explaining what the heck it all is about.

Comics Should Be Good takes a look at all of Image Comics’s October covers.

Mike Sterling discovers that if you stare at a poster of Superman’s funeral long enough, the abyss also gazes into you.

Douglas Cohen responds to comments and criticisms of his drive to increase subscriptions for print SF/Fantasy magazines.

The Hugo Awards now have a website of their own – just in time for this year’s awards, which will be announced at Nippon 2007 in less than two weeks.

The UK SF Book News Network lists all of the newly-published books that they’ve received in the last three weeks.

END_OF_DOCUMENT_TOKEN_TO_BE_REPLACED

The New York Times gazes down its nose at Comic-Con, and says tsk-tsk quietly under its breath.

The Beat liveblogged the Eisner Awards ceremony…the first three or four hours of it, anyway.

Greg Hatcher of Comics Should Be Good traveled cross country instead of going to Comic-Con — and found comics along the way.

END_OF_DOCUMENT_TOKEN_TO_BE_REPLACED

Time magazine, which manages to get so much wrong so much of the time, oddly is very accurate and interesting on the subject of LOLcats. [via The Beat]

Not science fiction, but only because it didn’t happen: the British military is denying sending giant, man-eating badgers to terrify the citizen of the Iraqi city of Basra.

The New York Times’s PaperCuts blog looks at the cover of Cormac McCarthy’s The Road.

Paranormal romance writer Sherrilyn Kenyon is now listed in Cambridge Who’s Who, and sent out a press release to tout that.

The Readercon brain trust compiled the semi-official canon of Slipstream writing. Great! Now we can go back to arguing about what “slipstream” actually means…

If you happen to be in Luxembourg (and I can’t tell you how often I’ve found myself in Luxembourg without thinking about it), you might want to pop your head into the Tomorrow Now exhibition at the Mudam Luxembuorg, which “explores the relationship between design and science fiction.”

I’d expected something really weird from the Montgomery Advertiser’s reference to “Faulkner’s Narnia” — just think about that for a moment, if you will – but it turns out that Faulkner University is putting on a stage adaptation of C.S. Lewis’s The Lion, the Witch, and the Wardrobe as Narnia. Still, the idea of a Prince Caspian/As I Lay Dying mash-up is still out there for the taking…

END_OF_DOCUMENT_TOKEN_TO_BE_REPLACED

Interzone #211, a special Michael Moorock issue, will be published in a week, so TTA Press has posted its table of contents. Besides a new Moorcock story and novel excerpt, there are stories from Carlos Hernandez, Aliette de Bodard, and Grace Dugan, among other things.

Ansible has put out its 240th issue, full of the usual stuff – quotes that make people look bad, amusing anecdotes, dates, and so forth.

John Joseph Adams’s article about writing workshops, “Basic Training for Writers,” from the SFWA Bulletin, has been posted on the Science Fiction and Fantasy Writers of America website as a PDF.

END_OF_DOCUMENT_TOKEN_TO_BE_REPLACED

The BBC is reporting that Joss Whedon’s film Serenity topped a poll by SFX magazine as the best science fiction film of all time.  The magazine polled 3,000 fans.

Star Wars came in second, and Blade Runner was third.  Other films that made the list include Planet of the Apes, The Matrix, Alien,  Forbidden Planet, 2001: A Space Odyssey, The Terminator and Back to the Future.

SFX editor Dave Bradley said it was a "massive surprise" to see Serenity beating Star Wars.  "The TV show may have been cancelled, yet the Serenity universe clearly struck a chord with fans, thanks to its likeable characters, witty dialogue and amazing special effects."