Little Ditty About Danny and Fred, by Dennis O’Neil 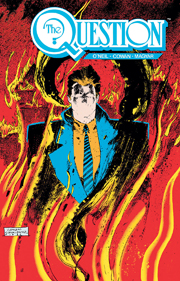 Danny and Fred were the last two kids in their grade to still believe in Santa Claus.

Danny had first believed in Daddy, but he stopped when Daddy began to yell a lot, and drink whiskey, and throw things. So Danny could believe he had a father, because he could see a man coming and going, but he stopped believing in Daddy.
But he still believed in Santa Claus. Santa Claus would never yell or throw things or drink whiskey, and besides, he brought presents and all Danny had to do was be good, which he was anyway. Fred, who lived next door, also believed in Santa, though he and Danny never discussed the etiology of it, so Danny didn’t know why Fred believed. He didn’t care, either.
Then, when Danny was fourteen, Father, who was once Daddy, came into Danny’s room on Christmas Eve and pulled Danny from bed and hustled him into the front room, where the Christmas tree was. Father sat Danny down on the sofa and got a big cardboard box from a closet.

END_OF_DOCUMENT_TOKEN_TO_BE_REPLACED

Forbes Magazine is out with their fairly annual list of the wealthiest 15 fictional characters, and our pal Scrooge is on top of the list.
Forbes offers complete explanations and profiles of each choice, and they’re a hoot. But I’ll get ahead of you on the #4 choice: Mom isn’t your mom or Dave Letterman’s mom; it’s Mom from Futurama.

I have a special relationship with Jason Bourne. But, before I elaborate on my entirely self-manufactured rapport, let’s establish something at the outset. Bourne (and/or 24’s Jack Bauer, for that matter) literally wouldn’t exist without James Bond. You don’t think that all their initials being “J.B.” is a coincidence, do you? In fact, the late author Robert Ludlum created the Bourne book series with the brilliantly simple and engaging high concept of “what if 007 got amnesia?”

So, perhaps I should rephrase my declaration: I have a special “bond” with Jason Bourne. Dr. No was the first “adult” film I ever saw. The Bourne Identity is the most recent movie I saw with my brother at a cinema. I saw its sequel, The Bourne Supremacy, on Christmas Eve, the last day of my first tenure as Santa Claus at the Danbury (CT) Fair Mall. Sitting alone in a dark hotel room as the snow fell outside, watching director Paul Greengrass’ frenetic, yet somehow followable, chases on a hotel’s small TV screen – prior to heading out for a Christmas celebration with my family – created an evocative memory.

Now there’s The Bourne Ultimatum, out this coming Tuesday as a single, non-special edition DVD. I originally saw the film at its New York screening, but truly appreciated seeing it again on an HDTV, since the DVD remote control allowed me to slow down the frenzied editing so I could truly enjoy the jigsaw-designed chases and hand-to-hand battles (especially a frantic fight in a cramped apartment where Bourne proves that the book is mightier than the knife).

Although it remains one of the worthiest second sequels in film history, I still found the DVD lacking for two small reasons. First, despite truly fascinating featurettes on the action sequences – “Rooftop Pursuit,” “Planning the Punches,” “Driving School,” and “New York Chase” – character building “deleted scenes,” which were excised when Greengrass decided that he was making a “violent ballet” rather than a character-driven drama, and a doc called “Man on the Move: Jason Bourne,” none (or all) of them really don’t communicate how agonizing the film’s production actually was.

END_OF_DOCUMENT_TOKEN_TO_BE_REPLACED

And while Santa Claus is toodling down Broadway and we start playing Alice’s Restaurant, we bring you the wise words of Warren Ellis:

Don’t forget, my Yanqui readers, the true meaning of Thanksgiving: give  your neighbours an infected blanket this Thursday and then move into their houses after they’re dead.

Eat hearty, give thanks, and if the Lions game bores you, take some time and read some comics.

Imagine me jumping up and down and pointing to myself and waving a book and yelling, Buy this you gotta buy this it’ll make you happy and rich and solve all your problems and give you Jessica Alba’s phone number it’s the greatest thing since similes…

One event is as likely to occur as the other.

I tell you this because soon I will mention a collection of stuff I wrote before some of you were born and I wouldn’t want anyone to think for a nanosecond that I was recommending you buy it.  We Missourians who have attained a certain degree of maturity do not so demean ourselves.  (We sip our tea and doze in the afternoon sun instead.)

Yesterday a Santa’s helper from Brown dropped an early Christmas (or Halloween) present on the front stoop, a box of graphic novel-format volumes titled Zen and Violence.  Now, somewhere on the space-time continuum between my typing these words and you reading them, they will be inspected by Mike Gold, who is the editor of this department and also edited the aforementioned collection of comic books.  Let us pause to consider that maybe the space-time continuum is, indeed, curved, and then enter a timid demurral regarding that title, Zen and Violence.

Not mine.  Not Mike’s, as far as I know.  My first problem is this: there isn’t much Zen in those pages.  A smidgen, maybe, but when I did the stories I may have thought I knew more about Zen than I did.  I’m not sure how the series came to be identified with Eastern thought, but it did, and if it does for someone else what the works of Kerouac and Ginsberg did for me – point to the Something Else out there – then maybe I should shut up and smile and bow and retire.

My second problem:  Yes, there is plenty of violence in the stories, or action, as some prefer to euphemize it.  These were, after all, published as superhero comics in 1986-1987 and nobody back then was buying superhero comics to study philosophy, nor should they have been;  violence…er – action was part of the package.  Nor do I want to be snooty about it; violence has some valid dramatic uses (and I guess action does, too.) But I don’t want anyone to think I recommend violence as an all-purpose problem solver, and putting the word in a book title might give that impression.

RECOMMENDED READING:  You want to know something about Zen?  Brad Warner’s your man.  Warner is a musician, monster movie fan and Zen priest and that, my friends, is a resume a lot of us would be proud to call our own.  His latest book is called Sit Down and Shut Up: Punk Rock Commentaries on Buddha, Good, Truth, Sex, Death & Dogen’s Treasury of the Right Dharma Eye.  The title, for once, says it all.

Overheard at my local comics shop this week:

"Yeah, I saw Warren Ellis at San Diego — I don’t know what it was, but he reminded me of Santa Claus."

"You mean fat, bearded, and with millions of underage children under constant surveillance?"

Which is as good an intro as any to Carla Hewitt’s 44 things said at the Spotlight on Warren Ellis panel. Probably not safe for work, and let’s face it, you’d be disappointed if it was.