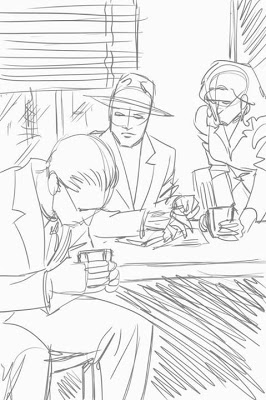 Tune in now for the start of a new weekly comic strip based upon Edgar Rice Burroughs’ historical novel of life and death during the final days of the Apache Wars. It is the fascinating adventure of Shoz-Dijiji, born as Andy MacDuff, and raised as a proud Apache. An honest and sympathetic portrait of Native Americans, ERB drew from his real experience living among them during his early years before becoming the world’s best-selling author. Burroughs himself considered THE WAR CHIEF his best and personally favorite novel among his nearly one hundred books.

All for ONE LOW PRICE of $1.99 PER MONTH! SUBSCRIBE NOW!!
http://www.edgarriceburroughs.com/comics/

For only $1.99 per month you can subscribe to Edgar Rice Burroughs comics, including the all-new Tarzan comic strips by Roy Thomas and Tom Grindberg, Carson Of Venus by Martin Powell, Thomas Floyd, and Diana Leto, and The Eternal Savage by Martin Powell and Steven E Gordon.

Quickdraw Books has released “Warbirds of Mars – Stories of the Fight,” a new pulp anthology based on the popular webstrip by Scott Vaughn and Kane Gilmour is now on sale!

It’s 1948 and WWII never ended! Instead, Earth was invaded by creatures from the stars! One small group of resistance fighters has banded together to hold the line…at all costs!

WARBIRDS OF MARS: STORIES OF THE FIGHT!

Bomber pilot Jack Paris. Lounge singer Josie Taylor. Bandaged avenger Hunter Noir. Mysterious hybrid Mr. Mask. Together they will stop at nothing to undermine the Martian occupation of Earth. From daring action in the South China Sea to explosive chaos on the frozen glaciers of Greenland. Watch a man transformed into a vigilante hero, as the world he knows crumbles around him. See an alien-human abomination discover self-worth in the death of a man who extends him kindness. What are the resistance plans for combating the Martian threat? Discover an awakening as two young boys journey from distant farms to the big city, to get in on the life of battle. Just what are the creeping monsters threatening the small southwestern town of Adobe Wells?

Scott P. Vaughn’s vision of a world ruled by three-eyed invaders from the popular webcomic comes to life in this anthology, with fourteen tales of intrigue, horror, and desperate action. The stories run the gamut from the air war, to the horseback of the wild west and the nocturnal alleys of battle-torn 1940s urban America. Brought to you by some of the best names in the horror, action & adventure, supernatural thriller, and comics genres. Relive the glory of the Pulp era with these stories of the fight.

You can find Warbirds of Mars on Amazon.

After announcing the news, Airship 27 publisher, Ron Fortier told All Pulp that, “Mark’s gorgeous cover on volume one has deservedly been nominated for the Pulp Factory Award for Best Pulp Cover of 2012.  So you can image how thrilled and honored we are at having him on board for this new book. He’s one of the most admired artist in the field today.”

Ruby Files co-creator, Sean Taylor also commented, “When I heard Mark Wheatley was back on board for another cover, I couldn’t believe it,” Taylor said. “I mean, let’s be honest, the stories may have really driven the book home for the first collection but what really, really attracted readers to the book in the first place was Mark’s cover. We couldn’t ask for better. Period.”

And Ruby Files co-creator, Bobby Nash added, “I’m thrilled to have Mark return to The Ruby Files. The cover to vol. 1 is great and really helped push the sales of the book. It’s a beautiful piece of art.”

On returning to The Ruby Files, Wheatley told All Pulp, “I’m looking forward to being inspired by more lurid, irresponsible, titillating, pulp-pounding action!”

DREAMING OF A MONSTER

New Pulp Artist Nik Poliwko has shared some art from the upcoming The Monster of Frankenstein Returns featuring the character of Elizabeth Von Frankenstein.

The Monster of Frankenstein Returns is a full-color graphic novel based on the works of Mary Shelley and Dick Briefer as written by Martin Powell with artwork by Nik Poliwko. Coming from Sequential Pulp and Dark Horse Comics!

Below is artist Nik Poliwko’s The Monster of Frankenstein Returns promo video.

Learn more about The Monster of Frankenstein Returns with more art here.