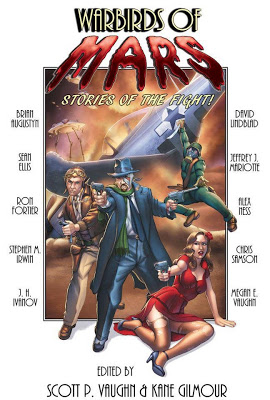 Quickdraw Books has released “Warbirds of Mars – Stories of the Fight,” a new pulp anthology based on the popular webstrip by Scott Vaughn and Kane Gilmour is now on sale!

It’s 1948 and WWII never ended! Instead, Earth was invaded by creatures from the stars! One small group of resistance fighters has banded together to hold the line…at all costs!

WARBIRDS OF MARS: STORIES OF THE FIGHT!

Bomber pilot Jack Paris. Lounge singer Josie Taylor. Bandaged avenger Hunter Noir. Mysterious hybrid Mr. Mask. Together they will stop at nothing to undermine the Martian occupation of Earth. From daring action in the South China Sea to explosive chaos on the frozen glaciers of Greenland. Watch a man transformed into a vigilante hero, as the world he knows crumbles around him. See an alien-human abomination discover self-worth in the death of a man who extends him kindness. What are the resistance plans for combating the Martian threat? Discover an awakening as two young boys journey from distant farms to the big city, to get in on the life of battle. Just what are the creeping monsters threatening the small southwestern town of Adobe Wells?

Scott P. Vaughn’s vision of a world ruled by three-eyed invaders from the popular webcomic comes to life in this anthology, with fourteen tales of intrigue, horror, and desperate action. The stories run the gamut from the air war, to the horseback of the wild west and the nocturnal alleys of battle-torn 1940s urban America. Brought to you by some of the best names in the horror, action & adventure, supernatural thriller, and comics genres. Relive the glory of the Pulp era with these stories of the fight.

You can find Warbirds of Mars on Amazon.