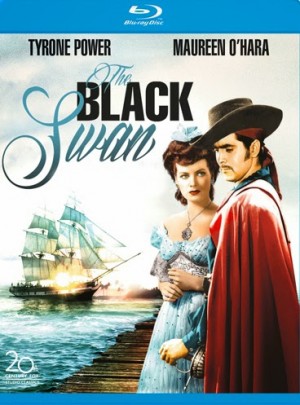 Today, you say Black Swan and images of a crazed Natalie Portman come to mind, but there was an earlier film by that name, a swashbuckler that has been forgotten by many.  The first Black Swan is a 1942 adventure starring Tyrone Power and Maureen O’Hara based on Rafael Sabatini’s novel. Having already succeeded with adaptations of Captain Blood and The Sea Hawk, this seemed a natural followup for 20th Century Fox.

Out on Blu-ray from 20th Century Home Entertainment, The Black Swan tells the story of the infamous Captain Morgan (Laird Cregar), attempting to lead a more virtuous life. He is appointed as Governor of Jamaica, charged with ridding the waters of his former brigands. No one trusts the notorious former pirate, complicating his work although he’s successful using his personal relationships to convince Captain Jamie Waring (Power) and Tom Blue (Thomas Mitchell) to end their criminal work. Others, including Captain Billy Leech (George Sanders) and Wogan (Anthony Quinn) do not agree with Morgan’s pleas.

(Yes, this is the captain Henry Morgan of history and the famous rum, but the film takes incredible liberties with the facts.)

While Morgan is doing his duty, Waring is now on land, and falls for Lady Margaret (Maureen O’Hara), daughter of the former governor, Lord Denby (George Zucco). She’s also involved with Roger Ingram (Edward Ashley), an English gentleman who provides a sharp contrast with Waring. Things get complicated when no one believes Morgan as piracy continues and Waring takes it upon himself to figure things out leading to intrigue, betrayal, and a few flashy sword fights. An early color film, it provides a visual impact the earlier adaptations lacked, which is why Leon Shamroy won the Academy Award for cinematography.  Power, on the other hand, lacked the charisma of Errol Flynn, his action rival of the day, and the film lacks a verve the others provided. Still, this is most watchable and worth a look. The film transfer is nicely done and sounds great.

There is an interesting commentary by film critic Rudy Behlmer and O’Hara along with the original Theatrical Trailer.

You can tell the next installment in Marvel Phase Two is coming closer because we’re getting better looks at the final product. Here’s a clip, “When do we Start”, just released by Disney. 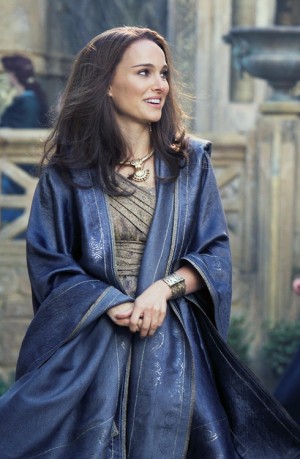 Marvel Studios, UL (Underwriters Laboratories), Dolby Laboratories, National Academy of Science, Girl Scouts USA along with the famous El Capitan Theatre in Hollywood, are proud to team up to sponsor a nationwide MARVEL’S THOR: THE DARK WORLD ULTIMATE MENTOR ADVENTURE in conjunction with the November 8th release of the film starring Chris Hemsworth and Natalie Portman.

MARVEL’S THOR: THE DARK WORLD ULTIMATE MENTOR ADVENTURE aims to empower girls 14 years and up, in grades 9 – 12 nationwide, to embark on a journey to discover their potential and future in the world of STEM: Science, Technology, Engineering and Mathematics.  Through the collaborative efforts of Marvel, UL (Underwriters Laboratories), Dolby Laboratories, National Academy of Sciences and Girl Scouts USA, girls will have a chance to go out into the real world and ask successful women in STEM fields about what they do, how they got where they are…and how others can follow in their footsteps.  The process is designed to help students to understand who they are, and why this experience can be impactful on their futures. For more information, rules and how to apply, visit www.ultimatementoradventure.com.

“MARVEL’S THOR: THE DARK WORLD ULTIMATE MENTOR ADVENTURE is a chance to inspire a generation and by doing so, to change their future –and ours – for the better,” said Victoria Alonso, EVP, Visual Effects & Post Production, Marvel Studios.

a week’s trip to Southern California, provided by UL (Underwriters Laboratories) and Dolby Laboratories. The Ultimate Mentor Adventure will allow the girls to meet some of the most incredible Women in Science such as Dolby Laboratory Senior Scientists, conducting interviews and be challenged to participate in experiments. It will also include interactive events and go behind-the-scenes where the general public is not normally invited – all while having their adventure filmed. On Friday, November 8th, the winners will conclude their excursion and be recognized at the Premiere Screening of their Ultimate Mentor Adventure documentary short.  The video short will be shown at the El Capitan Theatre prior to a screening of MARVEL’S THOR: THE DARK WORLD in Dolby® Atmos™ on opening day.

Marvel’s Thor: The Dark World continues the big-screen adventures of Thor, the Mighty Avenger, as he battles to save Earth and all the Nine Realms from a shadowy enemy that predates the universe itself.  In the aftermath of Marvel’s Thor and Marvel’s The Avengers, Thor fights to restore order across the cosmos…but an ancient race led by the vengeful Malekith returns to plunge the universe back into darkness. To defeat an enemy that even Odin and Asgard cannot withstand, Thor sets upon his most dangerous and personal journey yet, forced into an alliance with the treacherous Loki to save not only his people and those he loves…but our universe itself. 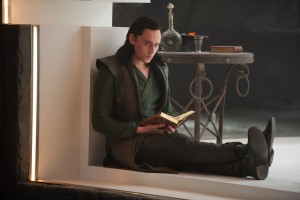 Now that people have absorbed all the sneak peek hoopla from Comic-Con International, Disney comes through with several new trailers. Yesterday it was The Muppets, today it’s Thor: The Dark World, opening in November. It’s more Loki-centric, playing off Tom Hiddleston’s newfound popularity and there’s one great moment with Natalie Portman’s Jane Foster resonating back to The Avengers. 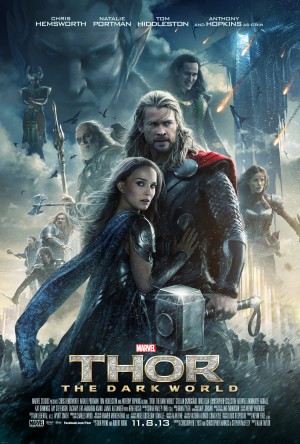 Marvel’s Thor: The Dark World continues the big-screen adventures of Thor, the Mighty Avenger, as he battles to save Earth and all the Nine Realms from a shadowy enemy that predates the universe itself.  In the aftermath of Marvel’s Thor and Marvel’s The Avengers, Thor fights to restore order across the cosmos…but an ancient race led by the vengeful Malekith returns to plunge the universe back into darkness. Faced with an enemy that even Odin and Asgard cannot withstand, Thor must embark on his most perilous and personal journey yet, one that will reunite him with Jane Foster and force him to sacrifice everything to save us all.

Marvel’s Thor: The Dark World continues the big-screen adventures of Thor, the Mighty Avenger, as he battles to save Earth and all the Nine Realms from a shadowy enemy that predates the universe itself. 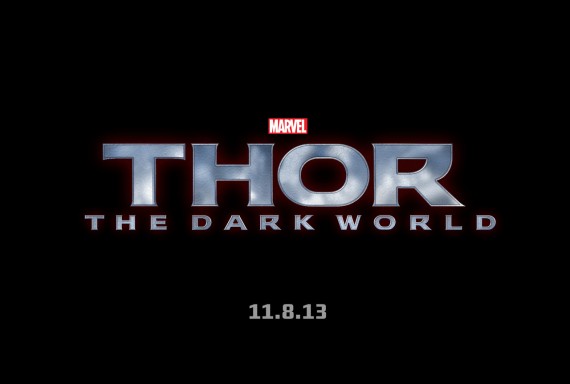 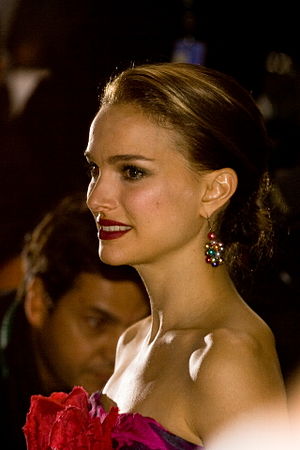 Boy, migrate one server, and a lot of links can pile up while waiting for your computers to reboot. Here’s some of the stuff we have to do before we get to the stuff we didn’t get around to covering yet…

THOR And The Road To THE AVENGERS 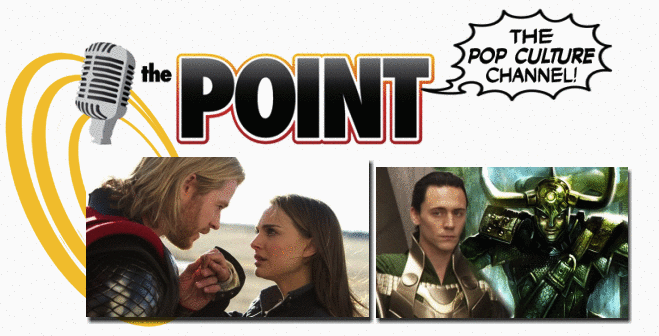 Did you expect anything than an (almost) Box Office Bonanza for THOR? We sit with the Chris Hemsworth, Tom Hiddleston and Kenneth Branagh on what hay took away from the experience of the film, plus Kevin Ferge talks about how these little things lead to THE AVENGERS.

Think THE AVENGERS will work as a big movie project? Drop us a comment below! 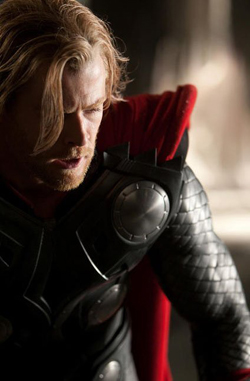 For a Marvel movie geek, three things were inevitable about Thor: 1) The Stan Lee cameo scene, 2) the post-end credits scene, and 3) nitpicking. Nitpicking is going to happen with any comic book related movie, and I’ve grudgingly accepted it as a necessary evil that certain sacrifices would need to be made in any translation of a story from one medium to another. Thus, certain things will have to be overlooked IF the end result is successful.

Marvel’s version of Thor in its many incarnations has tread a delicate balance of Norse mythology and something flashy thanks to Jack Kirby’s glorious art. In Kenneth Branagh’s movie adaptation of Thor, there are elements of the Prodigal Son, Arthurian mythology, and of course, grounding in Marvel history.

For his arrogance and defiance of his father Odin (Sir Anthony Hopkins), King of otherworldly Asgard, Thor (Chris Hemsworth) is stripped of his considerable power and warhammer Mjolnir and banished to Earth. Making matters worse, his brother Loki (Tom Hiddleston) is beginning to discover things about himself, and let’s say he starts some trouble, now that Odin is in a coma. While on earth, Thor is tricked into believing that his father is dead (and three guesses as to who tricked him).

There was the requisite love interest in Dr. Jane Foster (Natalie Portman), a scientist investigating atmospheric anomalies. As with recent Marvel movies, the shadowy government agency SHIELD was behind the scenes, and this being a Summer movie, there was the requisite amount of wholesale property damage.

While formulaic, Thor is refreshingly entertaining. Comic book movies rely heavily upon reverence for and adherence to the source material. The result must look and more importantly feel like the comic books. Kenneth Branagh’s Thor succeeds and entertains although the progression from arrogant bastard to superhero wasn’t deep enough, and I could have done without Darcy Lewis (Kat Dennings), Dr. Jane Foster’s ultra-annoying assistant.

If you still have no idea what the movie’s about, here’s a brief featurette:

Chris Hemsworth and Kenneth Branagh Face The Challenge Of “Thor”! 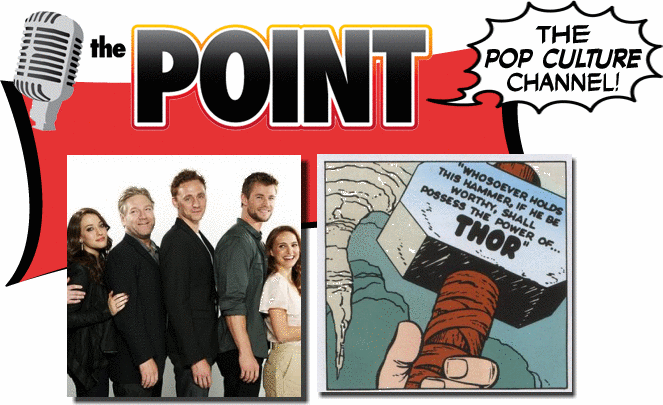 The 20011 Summer Movie barrage is now officially underway and first up to bat – one of the most beloved Marvel Comic legends, Thor. It was no easy task translating decades of comics into a visual project and we talk to the cast and director about how each one of them faced that challenge. Natalie Portman, Kenneth Branagh and Chris Hemsworth all join us for our exclusive coverage right here.

Ok – you saw THOR?  Did it hit the mark? Drop us a comment below!

No sooner do we get tired of thumbing through the Sports Illustrated swimsuit issue than Maxim gets temperatures rising with their annual Hot 100 issue. Coming to newsstands next week, we learn that model turned actress Rosie Huntington-Whitely has been crowed the top hot babe. She displaces Megan Fox, who tumbles to #17, in this summer’s not-eagerly-awaited Transformers: Dark of the Moon and has become the new It girl (at least this month). Huntingon-Whiteley tells Maxim that being named number one “is a huge honor.  It’s a great title to have for a year and you can have some fun with it, I think.”

The 100 is listed below and since hotness is in the eye of the beholder, we will all have our quibbles with the order, inclusion or absence of our personal favorites. Me, I have issues with many in the top 10 alone.

The full list, with comments from the magazine’s editorial staff, is behind the cut and let the debating begin! END_OF_DOCUMENT_TOKEN_TO_BE_REPLACED