November, 1941. Ace Air Adventurer Lance Star accepts a dangerous mission into an enemy stronghold to stop the Nazi’s from uncovering plans for a weapon long believed destroyed. Lance flies a solo mission to Kiev where he is to plant explosives and destroy a weapons facility when he runs into an old enemy. Now, Lance is faced with a choice. Complete the mission? Or take down the Sky Ranger’s greatest adversary? He’s only going to get one shot at this. Will he choose the mission or revenge? 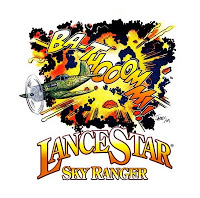 The print edition of Lance Star: Sky Ranger “One Shot!” is still available at http://www.indyplanet.com/store/product_info.php?products_id=4019

This is disturbingly depressing– this is what we have to look forward to in movie theaters this summer:

And what’s truly horrifying? I looked at his list of titles and he missed a bunch. There’s at least one movie with $200 million dollar budget based on a game that springs to mind. Not a computer game, mind you– a board game.

Hell, I’m expecting a movie version of Minesweeper any day now. (Having said this, I just looked on YouTube, and lo and behold…)

Luckily, no one’s made a movie of Hungry Hungry Hippos yet, although now that I have committed this to pixels, somebody inevitably will make it.

I’d say this is just a movie phenomenon, but really– how much streamlining is going on in the comics industry themselves? Both DC and Marvel seem to be streamlining everything down to seven major brand lines each, leaving precious little room to breathe and make something new.

The worst takeaway from the article:

The good news is that the four-quadrant theory of marketing may now be eroding. The bad news is that it’s giving way to something worse—a new classification that encompasses all ages and both genders: the “I won’t grow up” demographic.

Does that sound like the current hardcore fanbase of comics to you too?

via The Day the Movies Died: Movies + TV: GQ. 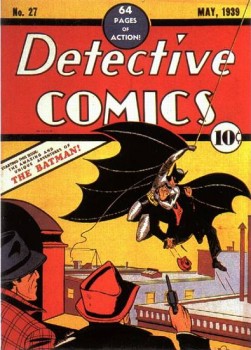 Geek Girl Con, a convention that will celebrate the contribution and involvement of women in all aspects of science fiction, comic books, gaming and related geek culture recently announced the dates and initial invited guests for it’s first gathering.

The first convention will take place October 8-9, 2011 at the Seattle Center in Seattle, WA.

From TechCrunch via Tom Galloway:

Last October, Google signed a $125 million settlement with the Author’s Guild to pay authors for copyrighted works it has scanned and made available on the Web through its Google Book Search project. More than 7 million books have been scanned by Google so far, a large portion of them out of print. Today, the Google Book Settlement site went up, which allows authors and other copyright holders of out-of-print books the ability to submit claims to participate in the settlement.

What do they get? Authors, publishers, and other copyright holders will get a one-time payment of $60 per scanned book (or $5 to $15 for partial works). In return, Google will be able to index the books and display snippets in search results, as well as up to 20% of each book in preview mode. Google will also be able to show ads on these pages and make available for sale digital versions of each book. Authors and copyright holders will receive 63 percent of all advertising and e-commerce revenues associated with their works. With Google Book Search now available on mobile phones, downloaded e-books could become an interesting digital side-business for Google. (But please Google, convert the scanned text into something more easily legible on the screen).

Remember, this settlement is only for the millions of out-of-print books that are making zero revenues for authors and publishers today. So it is not a bad deal all around. Copyright holders have until January 5, 2010 to make a claim.

There don’t seem to be many comics scanned in, but you never know. One wonders how they apply it to periodicals alike magazines and comic books.

Time Inc. is hoping to do for magazines what Netflix has done for movies and if successful, could open a new avenue for comic book readers. Maghound has opened up, allowing people to subscribe to tiers of magazines for reading.  It has opened up a beta site with 240 titles from not only Time Inc. but also Men’s Health, ELLE, Martha Stewart Living, Maxim, Ladies Home Journal, Parents, Better Homes & Gardens, Woman’s Day, Best Life, Popular Science, Prevention, Runner’s World, Women’s Health, VIBE, Car and Driver, PC Magazine, Gardening and Bicycling.

At present, no comic books, including any from sister division DC Comics, are available for purchase. Mad Kids, though, is available.

A reader can choose one of four tiers starting with three titles for $4.95 per month up to eight or more titles for $1 each per month. A reader can alter which titles read month to month so a first-timer could try Time, Runner’s World and PC Magazine then the following month swap out PC for ELLE.  Should a title not be published monthly, the site will offer substitute selections.

The site was in development for four years and was announced about a year back. When the launch date was announced, they had expected 280 titles so this comes in under estimates.

“It’s vital for circulators even more so than ever in this economy to test innovative new ideas," Peter Winn, director of planning and development, consumer marketing for Bonnier Corporation, told Folio Magazine. "Maghound has potential to be an important program for the industry and that is why Bonnier is in."