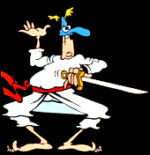 “I don’t care to belong to any club that will have me as a member.”

I didn’t know about organized comics fandom until 1964 when I interviewed Roy Thomas for a Missouri newspaper, and that was only a month or two before, under Roy’s aegis, I became a comics professional. And I wonder: if fandom had existed in, say, the 1950s in the roughly the same way it does now and if I’d had access to it, would I have joined?

I don’t know. I’ve liked comics and science fiction and related stuff since I was a kid, but I’m a margin guy, not a joiner. If you discount a rather dismal stint in the Boy Scouts, a year in Junior Achievement, and several years as a member of my high school speech club, my organizations have either been therapeutic or professional. The Academy of Comic Book Arts burst on the scene in the 1970s and then gradually faded to black to live on only in memory and as a Wikipedia entry. I joined The Writer Guild East, and finally and briefly, The Science Fiction Writers of America – those were the professional clubs and if there’s another, I’m not remembering it.

But being a fan might have been fun, so who knows?

What prompts this stumble down Memory Lane are the items I’ve been reading off my computer screen lately, not only about comics’ splashiest progeny, superheroes, but about comic books themselves – newsy tidbits that once would not have been fodder for the news maw but might not have interested anyone who was not a fan.

So: has fandom infected the masses?

Well, thanks for a lovely woman I once knew who had a connection or two to the world of the fan, I came to realize that this world offered much more than opportunities to immerse oneself in a cherished art form. It provided camaraderie and a private quasi-mythology for the initiates and a context in which to meet people who could become important to you, and that emphatically does not exclude possible mates. Finally, fandom provided an excuse to get out of the house and go places, mingle, party, and have an old-fashioned good time.

In other words, fandom offered some of the same benefits as religions, lodges, amateur sports, alumnae organizations, veterans organizations, yacht clubs… In some respects, fandom belongs among those groups and others of their ilk. It gives us a pleasurable way to heed one of evolution’s commandments: Find your tribe and belong to it.

But when millions share a fairly intense involvement with an art form and it has morphed into Big Business, can those millions be considered to be a tribe? Doesn’t tribal membership require some measure of exclusivity?

Wiser folk than I, please take note and provide an answer. Meanwhile, for those of you who want superhero fixes and don’t want to be part of a megahorde, may I suggest that you limit your involvement with the genre to comic books? There aren’t a tremendous number of comic book readers – heck, of any kind of fiction readers – around these days, so if it’s exclusivity you crave… don’t count on running into me.

2 GUNS was created and written by Steven Grant, a veteran comic book scribe well known for developing Marvel Comics’ THE PUNISHER into a franchise character. Story follows two thieves targeting a mob bank – unknown to either, they’re both undercover agents. They pull off their heist, only to find out they’ve stolen cash from a CIA black bag operation, not the mob, and are now in over their heads. Project is targeted to be a throwback to classic 80s buddy movies in the vein of LETHAL WEAPON and 48 HOURS, but with a modern spin. Grant is well known to comic book fans for his online Comic Book Resources column Permanent Damage as well as his work on the Dark Horse Comics character "X" and the Marvel series X-MAN.

Boom! is currently posting pages from 2 Guns on their website as part of the publisher’s free webcomic initiative.

The full press release is posted after the jump.

END_OF_DOCUMENT_TOKEN_TO_BE_REPLACED

Is there anyone who wants a PlayStation 2 that hasn’t gotten one at this point? Well, the answer must be "yes" because, to the embarrassment of the next-gen game systems, people are still buying the PS2 in greater numbers than its online, Blu-Ray PlayStation 3 brethren. Not surprising when you consider the latter is a $400-500 purchase.

If you’re not billionaire Bruce Wayne, and you’re quite happy with regular DVDs and keeping your gaming largely offline, then you might want to consider Sony’s upcoming LEGO Batman bundle for the PlayStation 2, announced at the recent E3 technology convention. For $149.99 you get the latest model of the PS2, LEGO Batman, and a DVD of Justice League: The New Frontier. It’s a package that seems geared specifically for the comic fan.

Even LEGO Catwoman would consider that a steal.

Luke Goss has played some of the best bad guys in film in the past 10 years, from Blade 2 to Steven Seagal’s Mercenary for Justice, and now he fills the role of “Prince Nuada” in Hellboy II. We got to chat with Luke about his makeup in the film, his relationship with writer/director Guillermo del Toro, and even his take on comic book fans.

Missed one of our Hellboy II: The Golden Army interviews this week? Here are links to all of the recent ComicMix TV interviews with the Hellboy II cast and crew:

While Warner Bros./DC is actively shutting down fundraisers, the friends and family of artist Gene Colan are continuing to put the word out about their need for donations to help with the cost of Colan’s medical bills due to dangerous liver problems.

Dirk Deppey over at Journalista has made it the top story for the entire week and like many other sites, provided a link to auctions of Colan’s original art that his family has posted. He’s also offered up an alternate strategy for getting much-needed money into the right hands:

Do as I did, and make a direct donation via Paypal, where the Colans are registered as genecolan@optonline.net — just log into your account, hit the “send money” button, and insert said email address and the amount you wish to donate into the appropriate boxes. Oh, and you might want to mention the word “donation” prominently in the comments box, so the Colans don’t have to sort through a bunch of listings to find the eBay payments.

Tom Spurgeon also offered up a host of links and information about Colan, his predicament and how you can help, while ComicMix pal Mark Evanier posted a long message about Colan on his website:

I don’t know what else to write here. It just seems appropriate to send a whole lotta love the Colans’ way this morning. I hope the dire reports on his health will prove to be overstated. I hope we’ll have Gene around for many more years. I hope — and of this, I am the surest — that Gene is well aware how many fans he has and how, whenever he goes, he’s leaving behind an incredible body of work that will be praised and studied and appreciated by comic book fans who aren’t even born yet. I just think we oughta postpone losing a guy like that as long as possible.

A message from Colan’s wife Adrienne can also be read here.

END_OF_DOCUMENT_TOKEN_TO_BE_REPLACED

7-Eleven convenience store chains have a long history of releasing character-licensed Slurpee cups based on Marvel and DC properties, so it wasn’t a big surprise when I heard that Iron Man was next in line to help reacquaint thirsty customers with the effects of brain freeze. On the eve of the Iron Man movie release, I ventured into a local shop and had a look around at the Iron Man merch.

While there are regular, movie-based lenticular cups with little figures on the straw, it’s the Iron Man helmet and replica mug that brought a smile to my face. Sure, adults groan about merchandising, but the kids inside of us love it. Yes, comic book fans across America, you now have a new pen holder… or whiskey mug, if that’s your thing.

Here’s the official word on the promotion:

A collectible, refillable mug features the red and gold helmet of Iron Man’s Mark III suit of armor.  The 28-ounce mug retails for $3.29 and includes a Slurpee fill up. Additionally, 7-Eleven will offer three different Iron Man Slurpee spoon-straws with detachable Iron Man and Iron Monger figurines for a price of $1.49 each.

END_OF_DOCUMENT_TOKEN_TO_BE_REPLACED

Ever like the trailer more than the movie? Yeah, me too. If I wasn’t sneaking into half  of those movies, I’d be upset.

News parody site The Onion took that concept and added typical comic fan anti-buzz to the Iron Man movie trailer. Wouldn’t you have loved it if Superman Returns stayed a trailer?

How do you get comic book fans interested in the political process? By framing it in terms they understand… using Batman villians.

(Not responsible for any votes cast as a result of watching this video. I believe in Harvey Dent.)

Want to start a lively discussion with your comic fan buddies? Ask them who has the best costume and watch the sparks fly. Get the heat started when we fire up the Big ComicMix Broadcast and tell you where to find the list of what some fans call "the best" — plus the holiday is over and it’s back to the comic racks for a run of new titles out this week, and a great line up of DVDs, too,  especially if you are a TV fan.

You know – a really cool costume would have a BUTTON like this YOU CAN PRESS!

It’s still there, but now it’s a museum – complete with 1955 cars in the parking lot.

On behalf of what you’ve done for the bodies of millions of comic book fans across America, we’d just like to say: Thanks heaps.