Marc Alan Fishman: How to (Re)Become a DC Fan (Again)

Last week I tore DC Entertainment a new bum-port over their recent efforts to entertain the masses. If you didn’t read it, let me sum it up for you.

I was, and I still am, butthurt over how terrible Batman v. Superman: Dawn of Martha as well as Justice League: War! Huh! Good-God. What is it good for? Absolutely Nothing! But I digress.

As I’d been buried in freelance work this past week, I’ve found that firing up Netflix on my second screen helps me focus. Headphone blaring quality programming on demand whilst I graphic design my way out of the hole I dug has been very fruitful as of late. I was able to binge-lance my way through season 4 of House of Cards, rewatch the first season of Better Caul Saul, rewatch the entirety of Breaking Bad (because, how could I not?), and watch the entirety of Orange is the New Black. With basically all the greats consumed, I flick-panned down the categories suggested to me by the ancient and powerful mystic algorithms of metadata and ended up on a gem I’d honestly forgotten about: Young Justice.

I just completed my consuming the epically long first season. Upon revisiting the show – once a staple of appointment-TV in my home some six years ago when it debuted – I’d come to remember how insanely amazing it was. And presented against a still fresh pair of donkey turds DC delivered to me merely a week or two ago… YJ is a bloomed rosebud poking out of nuclear soil.

Brandon Vietti and Greg Weisman delivered an animated epic that proved you could have an action-focused plot bolstered by naturally angtsy protagonists and not end up decimating whole cities, crying, in the pouring rain. Instead, they chose to remember the lore and continuity that exists over decades of comic books, and be inspired to give us thinking heroes who understand that you can’t save the day by just punching harder. Hell, they even dedicated an entire subplot about that very point with Superboy!

When the first season reached it’s emotional climax – where each subtlety crafted sub-plot was unraveled at the feet of the titular team? We got no kicking, screaming, crying, or pouting. Instead we got three-dimensional characters willing to hear one another out before the punching, and we got catharsis, reciprocity, and a commitment to camaraderie. Somehow after all that gooey, hard-to-handle plotting? They delivered with an astounding third act of pure action without batting an eye. In contact, David Goyer and Zach Snyder just bashed their action figures against each other while a team of overworked CG animators called home to tell their loved ones they wouldn’t be released until they’d figured out a way to add hate to the blood spatter effects.

And remember… one of these pieces of media was meant to be marketed to children. The other has seemingly been adopted by petulant children. Natch.

I titled my ramblings this week “How to (Re)Become a DC Fan (Again)” as Young Justice doused the fire that torched my love of the company and characters a week ago. It reminded me that beyond the now-obvious battle plan to simply angst their way to financial success, DC once allowed creators who truly love their deep bench of heroes and villains… and allowed them near free-reign to tell great stories. Young Justice, Teen Titans, and Legion of Super Heroes, did just that. Taken in stride alongside Batman: The Animated Series, Superman: The Animated Series, Justice League, Justice League: Unlimited, and Batman Beyond (with an honorable mention to Batman: Brave and the Bold) I am assured that even if the next decade is drowned in dreck, I am not far removed from happier times.

Oh sweet baby Jesus. I’ve just become that old guy who says “They don’t make them like they used to, damnit!” 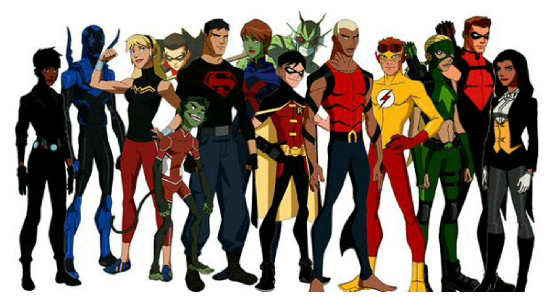