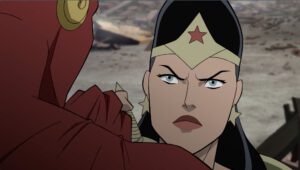 Stana Katic returns to the DC Universe Movies as the voice of Wonder Woman in Justice Society: World War II – which is current available on streaming services.

Katic is best known for her lead roles on Castle

, Absentia, and A Call To Spy. She made her DC Universe Movies debut in 2013 as Lois Lane in Superman: Unbound (2013). She also was featured as the voice of Talia al Ghul in the 2011 videogame, Batman: Arkham City.

Here is a link to a trio of video interview bites (tied together) featuring Katic discussing various aspects of her performance as Wonder Woman in Justice Society: World War II.

In the three bites, Katic discusses Wonder Woman’s specific role in the film; the story’s notable balance of action, romance, and humor; and the characteristics and motivations Katic most loves about Wonder Woman.