Although Arrow set the tone and allowed the CW to grow its own integrated television universe, the series itself has been a maddening, uneven affair that always seems to take three steps forward then backslide at least one.

In what could have been a final season, that unevenness was never more frustrating as the show whipsawed characters and situations into increasingly dumb configurations that annoyed rather than entertained.

You can revisit all the nonsense in Arrow: The Complete Sixth Season, out now on Blu-ray and Digital HD from Warner Home Entertainment.

Season Five ended with Oliver (Stephen Amell) and Felicity Smoak (Emily Bett Rickards) finally comfortable with one another, ready to resume their romance. Everyone is manipulated or kidnapped to find themselves on Lian Yu as Adrian Chase John Segara), who is excessively over-prepared, blows it all to hell.

We open the new season with the aftermath, starting with the death of Samantha (Anna Hopkins), who begs Oliver to care for their son William (Jack Moore), who has just learned of his father’s alter ego. As everyone is licking their wounds, we meet the tech savvy Cayden James (Michael Emerson), who is working to subvert Mayor Queen and ruin Star City. Not helping matters is FBI Agent Samanda Watson (Sydelle Noel), looking into the Mayor and the city’s leading vigilante.

Along the way, we have the crossover “Crisis on Earth-X” which ended with Ollie and Felicity finally tying the knot and shifting her from the geeky, fun, and intense hacker to the nurturing surrogate mother, watering her down as a character.

The producers decided their overstuffed Team Arrow needed pairing and contrived to force them into betraying and distrusting one another so they’re split into the Original Team and the New Team, none of which is convincingly handled. Neither is the internal strife between Ollie and John Diggle (David Ramsey), as they feud over which ones gets to play Green Arrow, further splitting the team.

In perhaps the most interesting twist, halfway through the season, James is killed off by the real mastermind behind everything, thuggish Ricardo Diaz (Kirk Acevado) who then is revealed to have somehow put every cop and judge in the city inside his suit pockets. Once more, the antagonist appears to have thought of everything while our heroes stumble into one another, blindly led into trap after trap, never growing wiser or better prepared. Aiding him is Anatoli (David Nykl), who really added little this season and was wasted while Black Siren (Katie Cassidy) seemed to play both sides against the middle with no clear agenda.

Diaz forces his way into The Quadrant, described as the secret cabal running America’s underworld but they come across as boobs, as one by one, Diaz shoots them without consequence. He, sadly, repeatedly survives near death and will remain a threat in the seventh season, commencing in October. 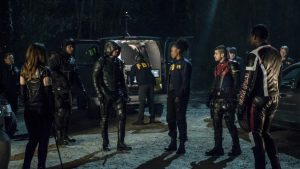 We wind up with Quentin (Paul Blackthorne) dead, Thea (Willa Holland) leaving to find herself, and the team reunited, saved from the FBI by Oliver giving himself up and going to prison so he has failed his city and is paying the price.

The sheer incoherence of the plotting spoils some great performances and the overemphasis on the amazing stunt fighting has long since become boring. Should the seventh be the final season, one hopes new showrunner Beth Schwartz will bring some dramatic coherence and discipline to the series.

The Blu-ray discs are AVC encoded 1080p transfers in 1.78:1 with DTS-HD Master Audio 5.1, making for a fine home entertainment experience.

The special features are scattered across the four discs with the first offering up The Split of a Man: Deathstroke (11:48); the second gives us an in-depth Inside the Crossover: Crisis on Earth X (41:59); the third offers up Revenge in Ones and Zeros: The Story of Cayden James (10:52), which just reminds us how wasted Emerson was; and finally The Best of DC’s Comic Con Panels San Diego 2017 (58:27). No deleted scenes or gag reel this time.