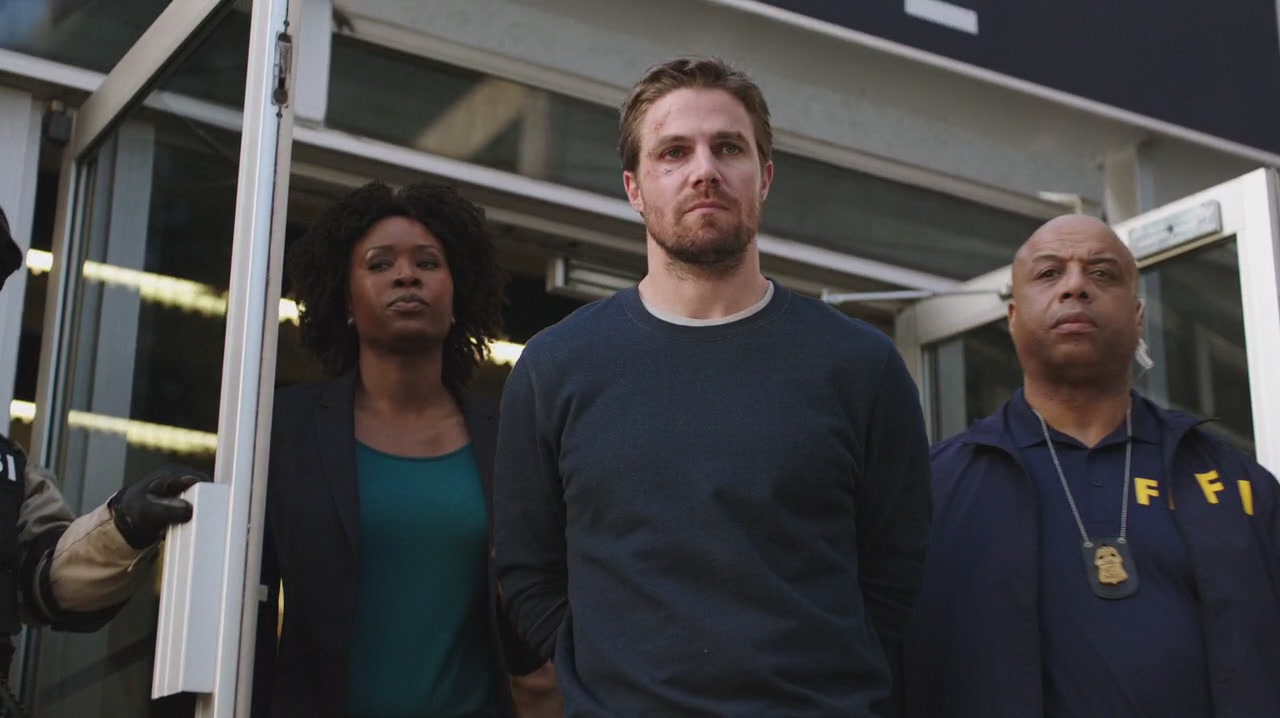 You will recall, unless you purged the nonsense of “Docket No. 11-19-41-73” from your mind – and I wouldn’t blame you if you had – that Oliver (The Green Arrow) Queen and Team Arrow were fighting Ricardo Diaz, a crime lord who had taken over Star City. In the “Previously on” section of “Life Sentence” Oliver went to FBI agent Samandra Watson and asked her help to take down Diaz. Watson, who had been in Star City all season investigating whether Oliver Queen was secretly the Green Arrow – so far unsuccessfully – told Ollie, and I quote, “You want my help, I’m going to need you to say the words.” “The words” being an admission that he was the Green Arrow.

Now what Ollie should have answered was, “Listen, lady, how about I tell your frelling boss that instead taking down a frakking international crime lord, like you’re supposed to do, you’re threatening to withhold FBI cooperation unless I admit I’m a criminal?” (Although, I would have substituted in a few of what Mr. Spock called “more colorful metaphors.”) Instead, Ollie admitted he was Green Arrow. And by the end of the episode –

– the FBI used Ollie’s confession to get him to agree to a plea bargain. We’ll forgo discussing the details of the plea bargain for the nonce, because we have other nonsense to discuss first. Such as the fact that the FBI was able to use Ollie’s statement against him in the first place.

The Fifth Amendment says that no person can be compelled to be a witness against himself. Courts have interpreted said language to mean the government cannot coerce a confession from a person. Now as I don’t think any of you have any problem accepting that an FBI agent is part of the government, the real question is, did Agent Watson compel Ollie into confessing? What say thee, Messrs. Merriam and Webster?

You say to compel is, “to cause to do or occur by overwhelming pressure.” I think what Agent Watson did fits that definition nicely, so I am unconvinced that Ollie’s confession could have been used against him in a court of law. So unconvinced, in fact that I think even Jean Loring, as bad a lawyer as she showed herself to be in Ollie’s trial, could have won that argument.

Watson’s next step in bringing down Diaz, the one taken after she had stepped all over Ollie’s constitutional rights, was to go to Quentin Lance, the acting mayor of Star City, and have him sign an authorization for the FBI to operate in Star City, because “Diaz’s crimes are local.” Then Diaz spent the rest of the episode trying to extort Mayor Lance into rescinding said authorization. Which makes me wonder, was no one paying attention to what Diaz had been doing all season?

Here are just a few of Diaz’s many crimes. Diaz used Star City’s docks to import illegal narcotics into the city which he then distributed for sale. That means Diaz was involved in crimes that either crossed state or international borders or both. The FBI has jurisdiction to investigate interstate and international crimes. It don’t need no steenkin’ authorization from the local authorities.

Diaz joined The Quadrant, an international criminal organization. Or what the FBI calls transnational organized crime. And you know why the FBI calls it that? Because it has jurisdiction to investigate TOC activities at the local level without authorization.

Still I can’t fault the show for making this mistake. Without the B plot, the episode would have had twenty minutes to fill. And it might have filled it with something even dumber.

Which brings us full circle, back to Ollie’s plea bargain. In return for Ollie admitting he was Green Arrow and pleading guilty to whatever federal offenses he violated by being the Green Arrow, the federal government agreed to grant immunity for all the members of Team Arrow. Then Ollie went off to federal prison.

Remember when John Diggle, Dinah Drake, and Felicity Smoak testified that Ollie wasn’t the Green Arrow? That was perjury. Remember how Ollie was being prosecuted for vigilantism? Well those three could have been prosecuted for all the acts of vigilantism they committed as Spartan, Black Canary, and Overwatch. As could Curtis (Mr. Terrific) Holt and Rene (Wild Dog) Ramirez. Team Arrow could even have been prosecuted as aiders and abettors for all the crimes Ollie was prosecuted for in “Docket No. 11-19-41-73.” The feds couldn’t have granted them immunity for any of those state crimes. So Ollie’s happy ending? Only if he’s happy that Team Arrow’s on the Friends and Family Plan.

Okay, Team Arrow wasn’t actually prosecuted and didn’t actually go to prison. I guess law schools in Star City don’t have any classes on the difference between federal and local jurisdiction. Which is probably fortunate for us. After the nonsense that was “Docket No. 11-19-41-73,” did we really want to suffer through Docket Nos. 11-19-41-74, 75, 76, 77, and 78?