Michael Davis: The Truth About Harlan Ellison And The Lie He Told Us All 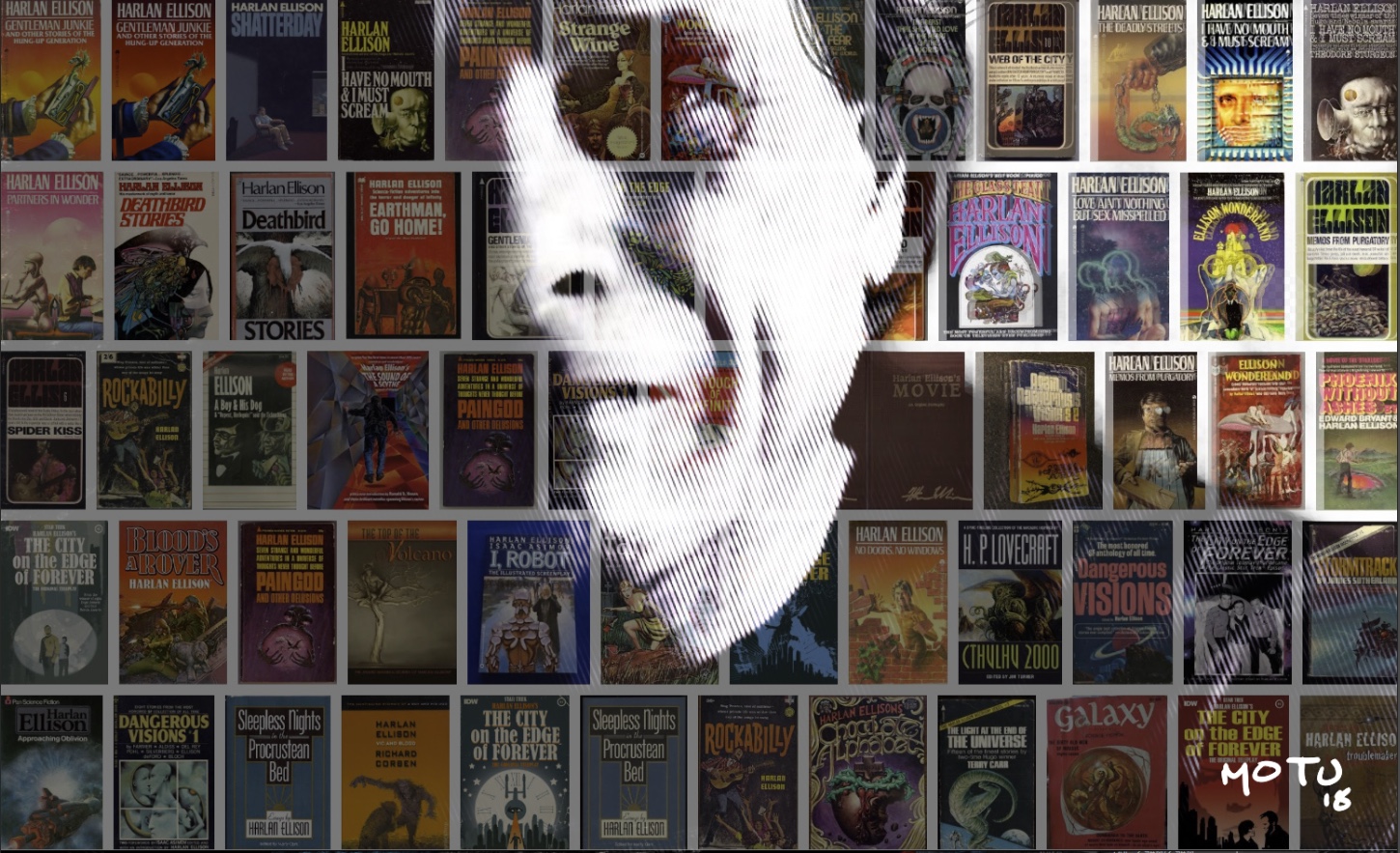 Note number 1: I wrote this first part in 2014. What’s below took me two weeks as I’ve been battling depression blah blah blah blah poor me etc.

Twenty minutes after I first met Harlan Ellison he handed me a signed blank check.

I’ll get back to that.

I found out what kind of friend Harlan was, and it’s essential to me people know the type of sway his friendship carries with it.

When I was very young, in the summertime my sister and I were sent to Alabama to stay with my stepfather’s parents. My stepfather would drive us from New York, and I looked forward to that two-day trip until one night I will never forget made me never want to go south again.

In thirty years of baring my soul as a writer, I have never written about that experience. I do so now to underscore the importance of Harlan’s influence in my life.

My stepfather Robert Lawrence was an alcoholic well before it was designated an illness. At six years old I would not have cared if it was an illness or a ring given to him from The Guardians of the Universe. Robert (yes I called him Robert, it’s a Black thing) could do no wrong— he was my idol. It’s astonishing we were not killed during those sometimes 100 mph trips to Dalton, Alabama.  Robert was always drinking, and driving two kids cross country was just another thing to do for him.

We had just entered North Carolina sometime after midnight. Robert had stopped to take a nap. My sister and I were in and out of sleep, and for years the following seemed like a bad dream. The taps on the windshields were loud but the voices— “WAKE UP NIGGER!” were more emphatic.

Robert opened the door and stepped out.

Although he wasn’t hit, he was none the less beaten badly. Those men said the kind of things that put Robert on his knees. The one thing I’ll repeat was this: “Boy, we the Klan.”  They had no robes or hood, but we all knew it was true. My hero was reduced to what I thought then was a coward. As I got older, I realized he wasn’t.  He did what he had to do to save my sister and I. It was years before I understand this event wasn’t a bad dream.

I didn’t know what a vow was, but I made up my mind never to go south again. However against my better judgment and fears, I went back to the south twice the second time I wrote about in the 2014 article linked above.

Both times, something terrible happened to me— both times, Harlan made it OK.

I was asked to be the auctioneer at a function to benefit battered women at Dragon Con in 1995.  Giving myself the “oh I was a child it couldn’t have bad” talk, I arrived in Atlanta early so I could go to the Civil War Museum. I am a big fan of American history, and I’m sure the Civil War Museum in Atlanta is all I heard it was.

I may never know.

My then girlfriend at the time and I got as far as the parking lot when it was made clear we should keep on getting on. I’ll spare you the details, but note to Black men who love history, here’s a tip: if you’re planning a trip to the museum leave your white girlfriend home.

To be fair, that was 1995, things may be different now that Trump is Presiden…shit. Just don’t go.

After the events in the parking lot, both my girlfriend and I were severely shaken.  I was determined to just go back to New York, but I owed the benefit organizers an in-person explanation at least.

Nothing was going to stop me from getting on a plane, or so I thought.

He heard I was bowing out found me and did the second kindest thing ever done for me. He co-auctioned the event and in doing so showed me the people of Atlanta were terrific kind folk unlike those who tore into me with such hatred earlier that day.

The two hours Harlan and I spent going at each other trying to get bidders to go higher and higher is why Dragon Con is my single favorite convention experience.

I love San Diego Comic-Con and would take a bullet for any staff member, but the single best time I’ve ever had at a convention was Dragon Con, and I’ve only been there once.

A lot has been written about Harlan’s brash in your face attitude. Many think that as a famous writer he was playing a role. His antics more ‘character’ than real.

Some even going so far as to say he believed little of what he preached.

I wish some people were smart enough to realize how stupid they are.

Harlan Ellison was a 20-year-old brand new writer in Hollywood when the biggest star in the world got in his face. Nobody and I mean nobody fucked with Frank Sinatra.  Frank got in Harlan’s face, Harlan  got right back into his.

Sinatra was the most powerful man in Hollywood at the time; Harlan was a writer and didn’t care. Give that a long hard thought. That as they say in the hood is ‘gangsta.’ Read the article “Frank Sinatra has a cold” and you’ll learn something about being true to yourself.  It’s all talk for most, not Harlan.

I mentioned what Harlan did for me at Dragon Con was the second kindest thing ever done for me, here’s the first: when I met Harlan he was leaving a party at Len Wein’s house; I had just gotten there.

We hit it off immediately.

“Give me a call, let’s grab a bite,” Harlan  said. “That would be great!” I responded and gave him my card. Harlan  looked at the card then gave it back. “You’re calling me, remember?”  For a moment I thought he was pissed, but I managed to utter, “Card?”

“Man, I don’t do cards.” He half yelled while digging around in his briefcase.

He produced a checkbook ripped out a check and gave it to me. “Whoa!” I stammered while looking at his name address and phone number printed on the front.  “Don’t you want to write void or something on this?”

He grabbed the check from me making a show of writing something on it. “Man, you’re like a little girl.” He tosses the check back to me and says in a much lower voice; “I’m sure I can trust you, but just in case you ever need help with anything…”

He signed the check.

I’d known the man for twenty minutes, and he had given me a signed blank check.

I ran after him with the intent of giving back the check. I reached him in about 30 seconds deciding at that moment to keep it realizing the message behind the gesture, this man wanted me in his life and wanted me to know he’s not fucking around. “I could be homeless and hungry; I’ll never cash it.”  Harlan  made a look like he had no idea who I was but before the front door closed, he hit me with a smile.

I had the check framed the day I heard Harlan passed.

The truth about Harlan is he was exactly who he said he always told the truth— except for this massive lie. He once wrote, “For a brief time I was here, and for a brief time, I mattered.”

Note number 2: To my loyal fans (both of you) I’ll try and stick around this time, but the thing about depression is it’s depressing so there. Harlan’s article I hope will be the last shared by all the outlets that carries my bi-line.

That last one was for you, Harlan.