The Law Is A Ass #432: Things Aren’t Impeachy Keen with Green Arrow 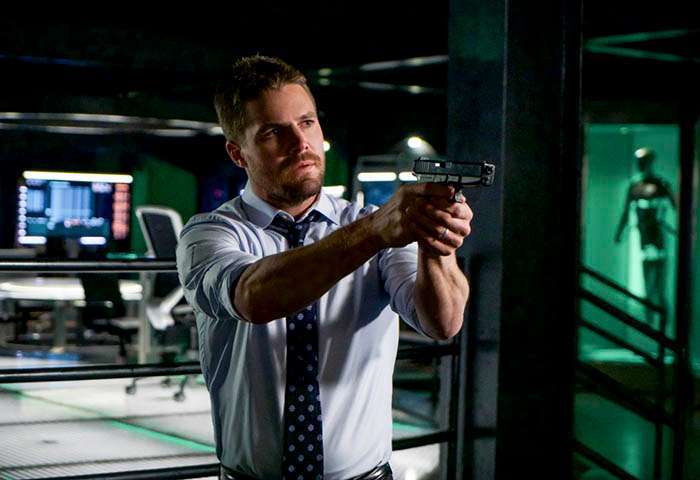 A wise man once said “Those who do not learn from history are doomed to repeat it. Usually in summer school.” No, it wasn’t George Santayana. It was me; I lied about the wise part. But whoever said it, the sentiment is true, so it would behoove Oliver Queen not to start planning that Disneyland vacation just yet. He has some summer schooling in his future.

First, I’m going to SPOILER WARNING you that I’m about to give away much of the plots of the Arrow episodes “Brothers in Arms” and “Fundamentals.” If you haven’t seen them, you might want to stop reading and go to Disneyland in Ollie’s stead.

Okay, now I’m about give you some needed background information by blitzing through about two-thirds of a season’s worth of Arrow episodes in just one paragraph. Pay attention.

Oliver Queen, who is both the Green Arrow and the mayor of Star City, is under investigation by both the FBI and Star City, for being the Green Arrow; which violates Star City’s anti-vigilante ordnance. Meanwhile, crime boss Ricardo Diaz, has taken control of Star City. So much so that in the Arrow episode, “Brothers in Arms,” Ollie could only find seven officers in the entire Star City Police Department who weren’t on the Diaz payroll. And in another episode which I’ll get to presently, police officers actually address Diaz as “Boss” right on a public street. That’s a level of corruption that would make Gotham City take notice, and Tammany Hall take notes.

Having brought you up to speed speedily, we go back to “Brothers in Arms.” Dinah Drake and the other six police officers who weren’t under Diaz’s thumb got intel that Diaz’s right-hand man, Anatoly Knyazev, was about to make a drug drop. They conducted surveillance and watched Anatoly make the delivery. So they arrested him on the scene and with the drugs.

Only to have Star City District Attorney Sam Armand immediately kick the case. Ostensibly he dismissed it because the police didn’t have a warrant when they arrested Anatoly. In reality, Armand was one of the many Star City officials on Diaz’s payroll. Like I said, Diaz’s corruption was more wide-spread than chlamydia in a whore house.

Now, I recognize that Armand would want to get the case against his boss’s right hand man dismissed. Still, it’s doubtful that he would have done so in such an obvious manner.

Dinah might not have had a warrant, but she did have reliable intel that Anatoly was making a drug delivery. They watched Anatoly go to the spot where the delivery was scheduled to take place and saw Anatoly give a briefcase to the man who met him at the delivery site. Anatoly’s actions corroborated Dinah’s reliable intel. The combination of observations and intel would have given Dinah probable cause to believe she had seen Anatoly commit a crime. When the police see a crime being committed, they can make an immediate arrest without having to obtain an arrest warrant first. Courts don’t actually require the police to tell the perp, “Wait right here while I go and get a warrant so I can come back and arrest you.”

Most district attorneys wouldn’t dismiss this case because of a lack of a warrant. They’d let it go before a judge who could hear the evidence and decide whether the arresting officer had sufficient probable cause to make a warrantless arrest.

Armand should have let one of Diaz’s corrupt judges dismiss the case. Or had one of the other corrupt cops steal the evidence, which would have necessitated the charges being dropped. Then no one would have suspected him. Instead, he chose to act in a way that was sure to make mayor Oliver Queen suspect that he was on the take and fire him.
After Ollie verified Armand was on the take, Ollie fired him. Along with police captain Kimberly Hill, who was also on the take. Like I said earlier, the corruption in Star City was so wide-spread, you could plot its growth on graft paper.

Which only created new problems for Ollie. When you’re the subject of criminal investigations, firing some civil servants might cause them to go to the TV news, claim you fired them to impede their investigation, and accuse you of obstruction of justice.

Can you guess what Armand and Hill did for the cliffhanger of “Brothers in Arms?”

In the next episode of Arrow, “Fundamentals,” the Star City City Council held a hearing to determine whether it should impeach Mayor Queen. At the end of the episode, the Council voted to impeach Oliver. At which point, Oliver, told Deputy Mayor Quentin Lance that he’d been impeached, so Quentin was the mayor now.

Which isn’t the way it works. As anyone who to learn from the history of Andrew Johnson and Bill Clinton would know.

An impeachment is an indictment, not a conviction. Articles of impeachment are the formal charges brought against the official. They lay out what high crimes or misdemeanors the official has committed to warrant said official being impeached, but they don’t remove the official from office.

When the House of Representatives voted to impeach Andrew Johnson or Bill Clinton, neither president was removed from office. Both continued to serve as president, while the Senate conducted a trial on the House’s articles of impeachment. If either man had been convicted in the trial, then he would have been removed from office. History tells us that the Senate acquitted both presidents and both served out their full terms. Without any interruption in their being President.

Speaking of later times, I know that earlier I said I’d write about yet another episode of Arrow presently. Well, to pervert an old saying, there’s no time in the presently. I’ll have to write about that episode in future columns. But they’ll be goodies. Remember all the fun we had dealing with the Arrowverse episode about the trial of The Flash? Next time it’s the trial of Green Arrow.