The Law Is A Ass #431: Spider-Man’s Crime Fighting Needs Improv-Ment 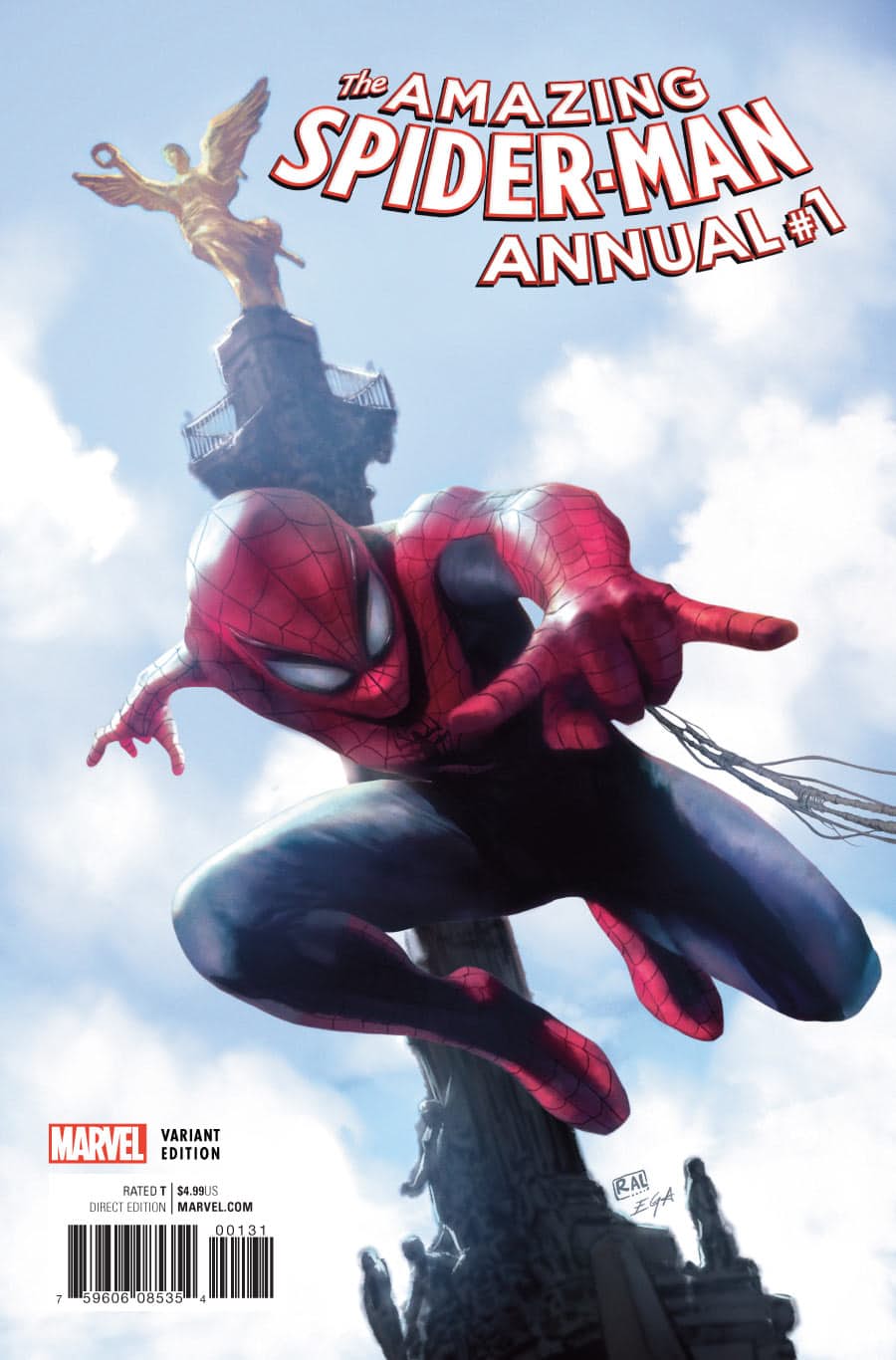 Spider-Man. Spider-Man. Who, according to the song, does whatever a spider can. However, when it comes to fighting crime, sometimes he doesn’t do it as well as a spider would.

The Amazing Spider-Man Annual Vol 3, No. 1 had three stories in it. We’ll take what was behind Door Number 3, a little deal of the day called “Whose Crime Is It, Anyway?” written by Wayne Brady and Jonathan Mangum. Because that was the story that gave the law a zonk.

In said story, Spider-Man went to a nighttime comedy improv workshop being taught by the aforementioned regulars on Whose Line Is It, Anyway? because Spidey thought he needed a refresher to hone his one-liner skills. He was Hulked out by his puny banter and wanted to be more quip on the draw. Spidey’s lesson didn’t last long. A page or so into the improving, he heard a burglar alarm and knew it was time to put his newly honed skills to practical use.

Okay, I’ll need a place that has money and a number between one and five. Ah, I heard “bank” and “three.”

Spidey went to the bank next door and found three men planning to loot the safety deposit boxes from the small safe, because the big safe would take too long. Spider-Man then crashed their party. Literally. He jumped through the bank’s front window. Spidey suggested the crooks work together, listen to each other, and act as a team. They agreed and decided two of them would crack the safe while the third emptied the teller drawers

A little later, the crooks all had sacks full of money and were walking out the door thanking Spider-Man for making it the easiest job they’ve ever done. Meanwhile, even though the alarm had been going off for some time now, the police still hadn’t arrived. Apparently this bank wasn’t close to any donut shops.

Undaunted, Spidey webbed the door so the crooks couldn’t get out. The three crooks rushed him. In a straight line. So that when Spidey punched the first crook, he fell back and hit the second crook who, in turn, fell back and hit the third crook. Spidey subdued the three crooks with one blow, not as good as a brave little tailor, but necessary when you’re appearing in a short story. Then Spidey told the crooks that he had waited until after they actually took some money, so they could be arrested for more than attempted robbery.

Hey, Spidey, maybe you should have paid better attention to that improv class. The purpose of, “Yes and,” is that you’re supposed to agree with what the person before you said then build on that to make things go smoothly. You don’t say, “Yes and how can I make things worse?” Because worse is what your little escapade made things.

Look at what Spidey did. Or, in case you don’t happen to have the comic in front of you so you can’t look, let me tell you what he did. First, he crashed through the bank’s window instead of coming through whatever entrance the crooks used, because that’s what all banks need; a gaping hole right in the front of their secure building. Then he let the crooks take money out of the safety deposit boxes and teller drawers, meaning that the tellers will have to balance all their cash drawers again. Then all those safety deposit boxes. And that’s after they pick up all the stolen money and sort it out. He put them through all this just so that the crooks would actually take some money and could be charged with more than just attempted robbery? Good plan! Considering that when the crooks took the money they couldn’t be charged with robbery – actual or attempted – at all.

According to the section 160.00 of the New York state penal code (I write in my best Jack Webb monotone) robbery in the third degree happens when, “in the course of committing a larceny, [the perpetrator] uses or threatens the immediate use of physical force upon another person for the purpose of… Preventing or overcoming resistance to the taking of the property or to the retention thereof immediately after the taking.” When the crooks took the money they hadn’t used, or threatened the use of, any physical force on anyone. So they weren’t robbers.

What they were was burglars. Because what they did violated section 140.20 of that same penal code by trespassing in a building in order to commit a crime there in. And that’s burglary of the third degree. Moreover, both robbery and burglary of the third degree are Class D felonies in New York. So Spidey could have gotten them convicted of the exact same class of felony without having to wait until they actually touched the money. Which would have made everybody – Spidey and the bank employees – happy. Okay, it wouldn’t have made the crooks happy. But, I repeat, Comics Code.

Now, when the crooks rushed at Spidey, they were threatening the use of physical harm so were guilty of robbery in the third degree. In fact, they were guilty of the Class C felony robbery in the second degree, because each crook was aided another person who was present during the robbery. But Spidey could still have achieved this result without letting them actually touch the money.

These crooks were stupid enough to rush Spidey unarmed. Okay they had arms, how else could they have carried those bags of money he let them get their hands on? But they didn’t have weapons. And they still rushed Spider-Man. In a straight line, no less, so he could punch one and turn them into human dominoes. I’m betting they were also dumb enough to have rushed Spidey if he told them he was going to stop them before they touched the money.