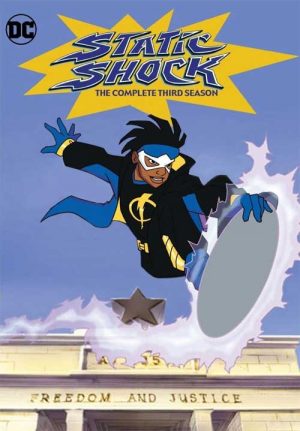 Milestone Media’s best-known character, Static, is back in the third volume of his animated adventures after the release of the first two seasons last year. Static Shock was somewhat revolutionary back in the day, featuring an African-American teen super-hero who juggled classes, girls, villains, and parents, not all that dissimilar to a certain wall-crawler. The comic was long gone, but he left a mark.

Virgil Hawkins (Phil LaMarr) arrived for the Static Shock the Complete Third Season sporting a brand new costume and during the season, his BFF Richie (Jason Marsden) gained powers, taking on the name Gear. Throughout the thirteen episodes comprising the series, which aired in the Kids’ WB, he left the confines of Dakota and journeyed to Africa and even partnered with Superman after fighting alongside the Justice League.

It helped that there were strong scripts from Milestone co-founder Dwayne McDuffie, backed by Paul Dini, Len Uhley, Ernie Altbacker, John Semper, Courtney Lilly and Adam Beechen. John Ridley, who wrote 12 Years a Slave and is about to write for DC Comics, penned the story for the Superman meeting, which was them scripted by Semper. They were backed with the usual strong vocal cast we have come to expect from Warner Animation.

The season opened strong with a return visit to Gotham City where he partnered with Batman (Kevin Conroy) to take on Harley Quinn (Arleen Sorkin) and Poison Ivy.

It was anything but meet cute when Static and Gear continually confront a new superhero named She-Bang (Rosslynn Taylor Jordan). As it turns out, she’s a fellow classmate with dark secrets that require her to seek their help. She makes a welcome return later in the season.

“A League of Their Own” was a fine two-parter that saw Batman ask Static for help when the JLA Watchtower was compromised. However, it also meant Brainiac (Corey Burton) managed to infiltrate the headquarters so Static and Gear have to help the Dark Knight, Martian Manhunter (Carl Lumbly), Green Lantern (LaMarr), Hawkgirl (Maria Canals), and the Flash (Michael Rosenbaum). This and “Trouble Squared” show Virgil in his previous outfit, suggesting these were second season productions held over.

The final team-up was “Toys in the Hood” brings Toyman (Bud Cort) to Dakota with Superman (George Newbern) hot on his spring-heels. The story, in part, ties up loose ends from the Superman: The Animated Series episode “Obsession.”

Apart from the super-heroic geekiness of Static meeting the other heroes, the season’s most important episode was “Static in Africa”, which brought the Hawkins family to Ghana. Of course, danger followed the vacationers so Static teamed with a legendary African folk hero to combat a group of bandits. The cultural impact of the episodes still resonates.

The season nicely ends with “Flashback”, examining life in Dakota before the blackout the rise of super-powered beings. A new character, Time-Zone (Rachel MacFarlane), brings Virgil and Gear to the past allowing him to come face to face with his mother (Alfre Woodard), whose memory was beginning to fade form his mind. And then we have “Blast From the Past”, a passing-of-the-torch episode as Static teams with a sixties-era hero, Soul Power (Brock Peters) to close out a crimefighting career.

The two-disc DVD set from Warner Archive contains all thirteen episodes with the S:TAS episode “Obsession” as the only bonus feature.