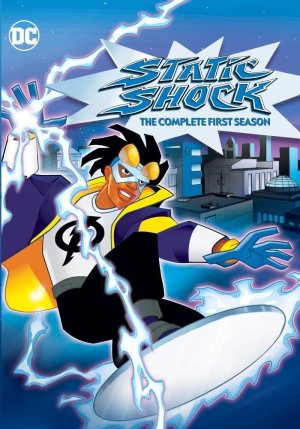 Animated fare was very slow to integrate, largely because there was a paucity of useful source material to mine from. In the 1990s, that began to change, largely thanks to Milestone Media, a multicultural operation that had a line of comics distributed through DC Comics.

Milestone’s best known character is Static, a young urban teen with a definite modern-day Peter Parker vibe to him. Virgil Hawkins just wanted live his life when he was accidentally exposed to mutagen gas, giving him electromagnetic powers. Donning a self-made outfit, he protected his corner of the ‘Hood as Static.

The show arrived in 2000 with a bang and became a cause because it not only featured a positive image of a black male, but closely resembled the source material thanks to Milestone co-creators Dwayne McDuffie and Denys Cowan being heavily involved in the show. Static has been back every now and then and the 52 episodes remain well-regarded even today. Thankfully, Warner Archives has released Static Shock: The Complete First Season.

For those unfamiliar, McDuffie started on staff at Marvel, rising to be a writer with a distinct voice. At much the same time, Cowan broke in to DC, training under the last full generation of master editors, allowed to develop his own, gritty style where he blossomed on The Question. Joining them on the production side was producer James Tucker under the guidance of supervising producers Alan Burnett and Scott Jeralds along with executive producers Jean MacCurdy and Sander Schwartz.

The subject matter was certainly different for cartoons as we meet Virgil (Phil LaMarr), who lost his mom to gang violence, being recruited to join one of the gangs that rule Dakota City. When the gas explodes, not only does Virgil gain powers but so do others and they are all dubbed “Bang Babies” whether good or bad. As Static, he tries to do what is right, despite the complications and obstacles. He also pines for her best friend Frieda (Danica McKellar). Thankfully, he has a faithful best friend in Richard “Richie” Osgood Foley/Gear (Jason Marsden), who covers for him and helps make equipment as needed. During the season, he also befriends Daisy Watkins (Crystal Scales), who becomes a confidant.

There are complications aplenty starting at home with his father, Robert Hawkins (Kevin Michael Richardson), who runs the Freeman Community Center and disapproves of the Bang Babies and their antics. This is contrasted by Ivan Evans/Ebon (Gary Sturgis), leader of “The Meta-Breed”.

The show is grounded in ways most other super-hero fare has not been and did not shy away from social issues such as the gangs and gang violence that was there from the beginning. A strong episode in the first season also dealt with racism while another dealt with responsibility after he took a job but had to leave it to save the day, only to be fired. There are ties to the Milestone universe as he comes under the watch of Edwin Alva, from Hardware.

While the animation is occasionally stiff, the storytelling, writing, and soul more than make up for it. The first thirteen episodes, included here with a smattering profile-style extras, allows you to watch the series and its diverse cast grow and mature.