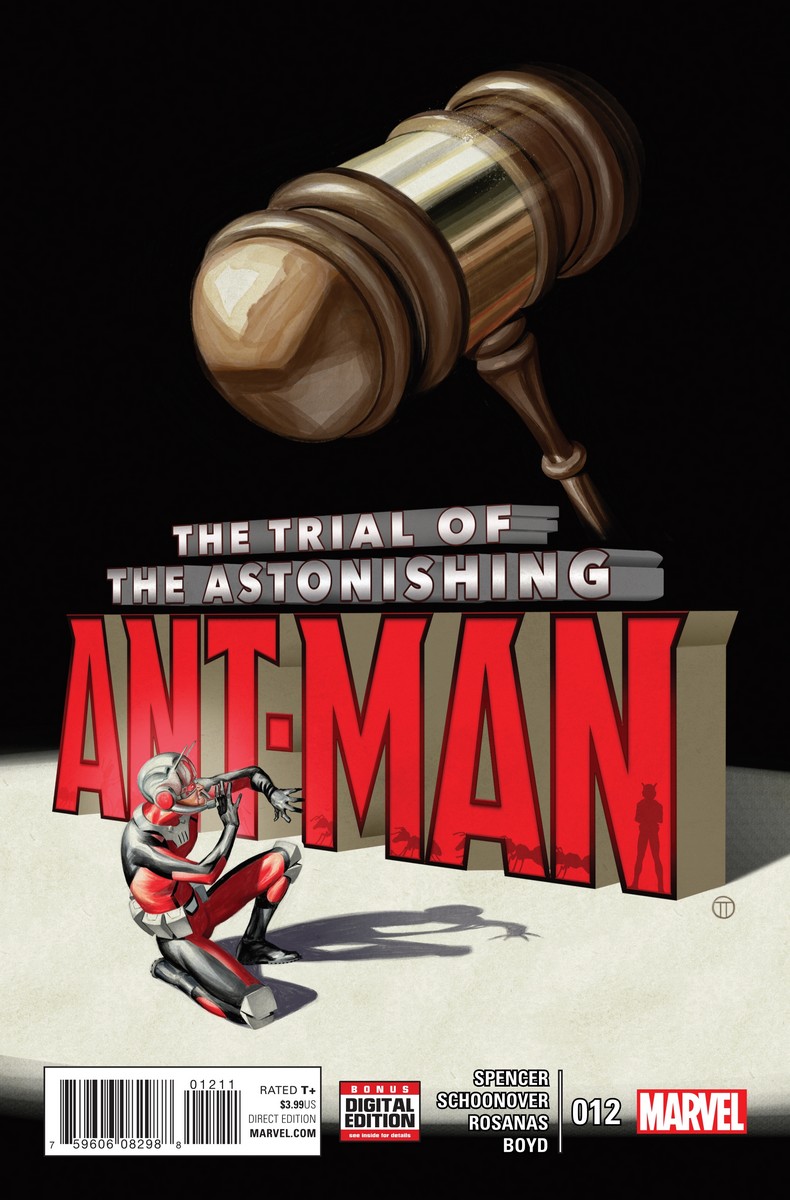 A long time ago in a multiverse far, far away…

Okay, it went on for two years. But back in 1983 – before decompressed storytelling and multi-part stories designed to be binge-read in trade paperback collections – two years was forever. The second “The Law Is a Ass” I ever wrote was also my first column about The Trial of the Flash. Several more followed. How many more? Well let’s just say before The Trial of the Flash, and I, were finished, I had earned enough writing about it to pay off my mortgage, insure my kids had no student loan debt, and reduced the national debt to zero from the taxes I paid.

So you can imagine my trepidation upon reading Astonishing Ant-Man# 12. It was, you see, the first part of The Trial of Ant-Man. Still, a journey of a thousand columns begins with a single step, so let’s get started.

Ant-Man – the Scott Lang version, not Henry Pym or the one nobody remembers because even I had to look up Eric O’Grady – was on trial for a crime he didn’t commit. Of course he didn’t. When a super hero is on trial in a comic book you can be pretty certain it’s for a crime the hero didn’t commit. In comics the only thing more certain than that is death and resurrection.

The crime Scott didn’t commit? His daughter – and former super hero Stinger – Cassie Lang committed it. How did this one time Young Avenger go rogue? Long story short; like this. To protect Cassie, Scott took the blame. He said he kidnapped Cassie and forced her to participate in his crime. It was a noble gesture, but it had serious repercussions; as the whole “The Trial of the Ant-Man” title would suggest.

The trial started as most trials do with jury selection but as there is virtually no way to make the voir dire process visually or dramatically interesting, the story ignored jury selection and jumped right to opening statements. Starting with the opening statement of Janice Lincoln, the prosecuting attorney. Janice went for the jugular. Scott’s. She argued that the jury should ignore Scott’s good deeds as Ant-Man, as Scott had been convicted of several felonies, abandoned his family, burned his bridges with the respected members of the super hero community, recklessly allowed his daughter to be killed – but resurrected, see I told you – and kidnapped that same daughter to force her to be his accomplice in a heist. Probably the only reason Janice didn’t blame Scott for The Great Train Robbery is that Scott’s strong suit has never been silent.

There’s a name for that in the legal biz. We call it “putting the defendant’s character in issue.” We also call it improper. In a criminal trial, the prosecution is expressly forbidden from offering evidence, testimony, or even opening statements about a defendant’s bad character in order to prove that the defendant acted in accordance with that bad character. Or, in words that aren’t ripped from compelling prose that is the Federal Rules of Evidence, it’s improper for the prosecutor to prove or even argue that the defendant has been a bad person in the past so probably continued to be a bad person and committed the crime.

So what’s my problem with Ms. Lincoln’s opening statement? After all, if the defense put Scott’s character in issue – and it did – then the prosecution would be allowed to rebut that claim of good character with an argument of bad character. My problem is that if proper trial procedure had been followed – and the story went out of its way to establish that the trial judge, the Honorable Ronald Wilcox, was a no-nonsense, by the book judge who would follow proper procedure – the prosecution would not have been allowed to make the opening statement that it did, because the defense wold not have put Scott’s character into issue yet.

Oh, I’m sure that Ms. Lincoln would have had her opportunity later in the trial. The defense’s sole tactic was to convince the jury that Scott Lang was a hero who wouldn’t commit the crime, so the defense was going to open that door eventually. Then all that other bad stuff about Scott’s character would have come in. In the legal biz we have a name for that, a bad idea.