REVIEW: Valerian and the City of a Thousand Planets 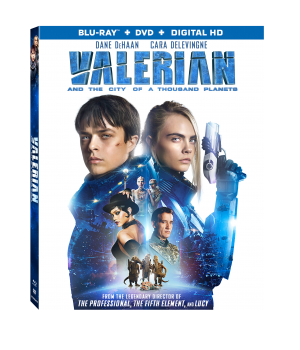 I was only vaguely aware of the French graphic novels featuring Valérian and Laureline, created by writer Pierre Christin and artist Jean-Claude Mézières. The albums ran from 1967 through 2010 and well incredibly well-received, leading first to an animated series before Luc Besson bought the rights for a feature film in 2012.

Well, five years later, he delivered Valerian and the City of a Thousand Planets, out now from Lionsgate Home Entertainment, and he lavished so much of the $200 million budget on spectacular visuals, he seemingly did not have enough left for a good script. The movie looked promising with its trailers, but it was all gloss, covering up a compelling story or well-delineated characters.

Despite loving the series as a youngster, Besson lost the charm of the series, ignoring Laureline’s origins as a peasant from the 11th century who encountered Valérian on a time travel trip and convinced him to bring her back to his era. In the film, they are seen as equals, partners, and friends as played by Dane DeHaan and Cara Delevingne respectively.

The film starts promisingly with a montage of first contacts through the ages that helps explore the origins of the city of a thousand planets but once we get to the 28th century, the story ignites into frenetic chaos and not much plot. No single character is well defined and the dialogue more perfunctory than revelatory. Basically, the plot involves the pair being sent by their commander, Arün Filitt (Clive Owen), to the fabled city of Alpha to determine what mystery lay in the center, which is connected to a world that has seen its share of misery. This beatific world has its share of interesting visuals and a pretty princess and her pet, called a Convertor for its ability to, well, convert materials.

Overall, this is a pretty movie with many interesting ideas thrown here and there like a Pollock painting, but there’s no heart or soul, no worldbuilding to sustain the ideas. As a result, it’s mildly entertaining but leaves you hugely dissatisfied.

The Blu-ray is an AVC encoded 1080p transfer in 2.39:1, nicely capturing the colorful visuals. (Note: There is no home video version of the theatrical 3-D release.) The Dolby Atmos track is equally a match for the video.

Finally, there is The Art of Valerian still gallery and pair of trailers.