Joe Corallo: Comics Are Her Element 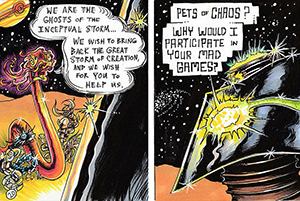 This week I’m doing another indie comics spotlight. Last week was about Russ Lippitt and his Kickstarter for The Showdown Volume 2, which is still ongoing. For this column, I’m highlighting indie comics creator Kathleen Kralowec.

I first discovered Kathleen’s work at NYCC 2016 when a friend of mine had picked up The Lion And The Roc. More than anything, the art really popped for me. I don’t know exactly the methods she used to create that particular comic, but it came out looking fantastic.

This past week I read Kathleen’s Electricity Is Her Element. It’s a bit of a mythological space opera, but I’ll get to that in a minute. What I’d like to talk about first is how she went about making this comic.

Kathleen’s approach to Electricity Is Her Element was to do it entirely by hand using only markers. She did this in her sketchbook over the course of a bit over a year, originally releasing new installments as a webcomic until March of this year. Her comic also includes some animation and is now available as one complete story on comiXology. 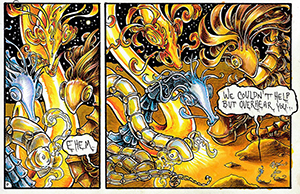 Okay, I should probably tell you what Electricity Is Her Element is actually about. The story revolves around snake like representations of elementals (don’t worry, they’re cute!) that live out in space. Basically, they feel that some of those in power of these elements have become complacent with order in the universe when really the whole point of all of this is chaos. After all, the universe was born in chaos; so I’m told. I haven’t asked Neil deGrasse Tyson yet.

To help fight back against order, some of the lesser space snakes summon the more powerful ones to combine forces against order. There’s quite a bit or action in the middle leading up to Ms. KerBop, an eccentric messenger of Electricity that helps these elementals understand themselves.

So, you may or may not be asking yourselves “what did Joe think about this comic?” Fine, I’ll tell you! Above all else, Electricity Is Her Element is gorgeous. It’s easy to see that Kathleen put a lot of thought and energy into the design of this comic. The marker work and the color choices make the pages pop from a mile away. The hand-lettering, while occasionally taking a second to understand what’s being conveyed, is leaps and bounds ahead of standard lettering practices. Each elemental has a very unique yet uniform design as well; something that’s difficult to pull off. 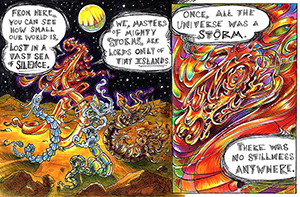 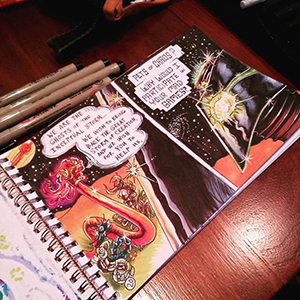 Where Electricity Is Her Element could improve on is having clear stakes, a comment that also applies to The Showdown Volume 2. While this comic is gorgeous and worth it simply for the visuals, it’s hard to feel like there are any serious stakes. What happens if they don’t stop order? This is unclear to me. The plot itself isn’t as imaginative in execution as it is in concept and design. This leads to a linear, typical, and ultimately predictable plot structure. Without giving away spoilers, there is a point where we get an exposition dump that I feel would have worked better being eased into the story or at least foreshadowed earlier on.

That said, Kathleen Kralowec is a talented, passionate illustrator and comics creator. Visually, this comic is absolutely stunning and worth your time. Please check out her work in the links above and support aspiring comics creators. If you’re not checking out Kathleen’s work and others like her, then you’re missing out on the future of comics.