The current Teenage Mutant Ninja Turtles animated TV series is now in its fifth and final season, scheduled to wrap on November 12, 2017. It makes me saaaaaad, because I love not only TMNT (original flavor to present) and this current show but every member of this series’ cast and crew that I’ve met while covering the show (and thanks to Nickelodeon for inviting me to continually cover each season of this freaking awesome TV show). The folks who make this show are amazing, and I feel privileged to have been able to follow their journey through the seasons to its end.

Despite the impending finish of the series, however, there’s a lot of awesomeness that’s been going on this season, and I expect (particularly given what Ciro Nieli said in our most recent interview, and my knowledge of his, Brandon Auman’s, and other crew members’ dedication to respecting this property and getting the stories right) that it will end as perfectly as the rest of the series has developed. As part of that, this season we’ve already gotten an extra-cool addition to the series cast, Miyamoto Usagi of Usagi Yojimbo, the anthropomorphic rabbit rōnin whom creator Stan Sakai based partially on the famous swordsman Miyamoto Musashi. 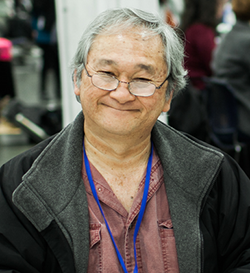 Thanks (as always) to Nickelodeon, I got to sit down to talk about this season with Executive Producer Ciro Nieli, Rob Paulsen (voice actor, Donatello), Stan Sakai (creator, Usagi Yojimbo), and Yuki Matsuzaki (voice actor, Miyamoto Usagi). We chatted about Usagi’s appearance in this TMNT series and about the end of the current show.

In particular, we discussed the history of intersections between TMNT and Usagi Yojimbo; how Usagi’s appearance came about in this series; Yuki’s casting and how he prepared for his first animation/voice acting role; Yuki’s reverence for Stan’s work and concern about getting the voice right in Stan’s eyes; Ciro’s focus on casting a Japanese actor for Usagi and general approach to casting; and everyone’s respect for this beloved intellectual property. We also talked about Ciro’s emotional preparation to move on from the series (which I could sense when I toured the Nickelodeon studio earlier this year and visited with him – his love of TMNT and being a part of it are so palpable any time you talk with him) and the determination he and everyone involved have to end the show right.

It was great to talk with everyone about this final season, and as always, I’m glad to share that chat with you here. Check out the video below for the full interview:

Despite my sadness at the End of an Era, I’m looking forward to enjoying a proper finish to the amazing execution of TMNT in the current show. And although I can’t say how any new interpretation of the show will grab me (particularly given, let’s be honest, how much I love the current era of TMNT, and how watching any new version will thus be bittersweet), it is noteworthy that Nickelodeon has announced 26 episodes of a reboot of TMNT called Rise of the Teenage Mutant Ninja Turtles. Details are scarce, although we do know that Andy Suriano (character designer for Samurai Jack) and Ant Ward (supervising producer on the current TMNT series) are producing the series; but obviously I’ll at least have to give it a chance and see how it goes.

But before then, I’ll be wrapping Season 5 of the current series with y’all and feeling the same pangs of sadness I assume are creeping up on all TMNT fans. Hang in there, fellow Turtles fans. At least we’ll always have these five seasons of awesomeness to console us.

So until this season ends, BOOYAKASHA! And also, Servo Lectio!