The Law Is A Ass #421: Daredevil Ends The Art Show, Mural Less 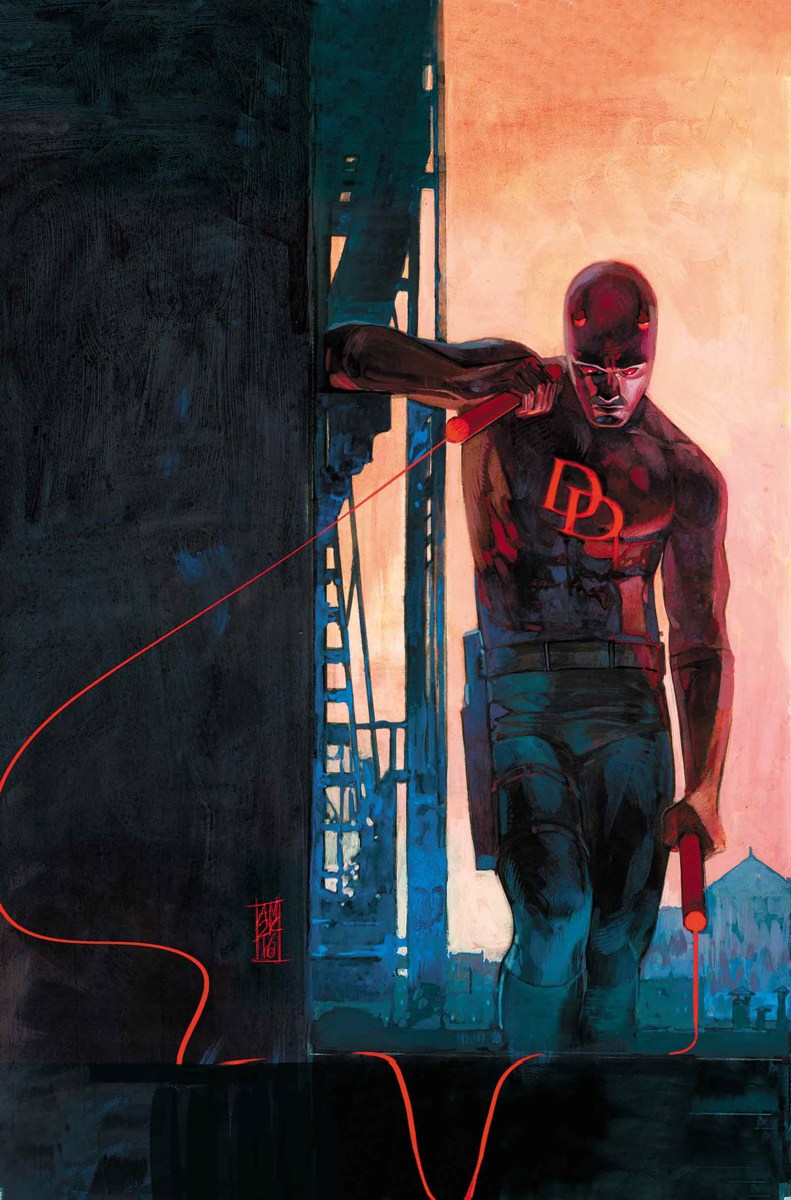 Well, since they’re going to make it easy for me…

In Daredevil vol 5 # 11, there was a new villain in town, Muse, a deranged artist who painted a mural on a wall. Given that we’re talking about a comic book, I think you can Banksy on the fact that there’s more to this villain than meets the eye. Not just Daredevil’s eye, which is blind after all, but even more than meets the eye of an eagle with 20/10 vision. See, it’s not that Muse was using other people’s walls for his paintings; that would only make him guilty of vandalism. Muse was also using other people’s blood.

Yes, while some artists paint in oils and others in watercolors, Muse used the blood of his victims. I think for Muse, his medium is the message.

Muse painted a mural on the wall of a warehouse owned by one Freddy Durnin using the blood of over one hundred and twelve different missing persons. Freddy wanted to display the painting to the public for ten dollars a head. Did the public want to see this corpuscular – or should I say corpse-puscular – work of art? I think the idea grue on them, because there was already a line that went “around the block.”

Personally, I’m not too sanguinary about Freddy’s chances. DNA tests established that one of the victims whose blood was used in the painting was the niece of Andrea Pearson, Speaker of the New York City City Council. And Ms. Pearson did not want the painting displayed to the public.

Now, given that there was the blood of over one hundred victims in the painting, I’m not sure how any DNA sample wouldn’t have been so hopelessly contaminated that it would have been impossible to positively identify any one victim’s DNA. But I’ll give the story that one. After all, this is the Marvel Comics Universe. Reed Richards probably killed an hour one afternoon when the Internet was down by developing a highly efficient method of separating cross-contaminated DNA samples that’s used by whatever DNAgency operates in the MCU.

Anyway, back to Councilwoman Pearson. When Freddy rebuffed her, she went to the District Attorney’s office to get him to shut the display down. And DA Hochberg turned the matter over to assistant DA Matt Murdock. Hochberg was mad at Matt, who had been shirking his duties as an assistant DA. Seems Matt was out protecting the streets of Hell’s Kitchen as Daredevil when he should have been attending to his ADA duties. So Hochberg dropped the case, and a sarcasm bomb in Matt’s lap, “You are supposed to be one of best attorneys of your generation, Matt. Please… do us both a favor. Prove it.”

Wow, some punishment. Hochberg punishes Matt by giving him a job that was so easy even a first year law student intern assigned to filing duties because the alphabet was at the upper end of his competence could accomplish in half an hour? Yes, punish the guy by giving him punishment that basically amounts to a paid afternoon off, that’ll show him.

Seriously, while I was writing these words, I came up with three arguments Matt could use to shut down Freddy’s nightmare. And I wasn’t even giving any thought to the problem.

Once Matt had a theory or five he would petition the court for either a preliminary injunction, an ex parte proceeding in which the person or persons who wanted to enjoin – or prevent – an action from happening appear before a judge without the other party to the case also appearing. To get a preliminary injunction, Matt would have to convince the court both that allowing the act he wanted to enjoin – here Freddy operating his art gallery – to occur would cause some sort of damage and that Matt’s argument would more than likely prevail when the case came to an actual trial. If the judge agreed, the judge would grant the preliminary injunction, temporarily blocking Freddy from running his gallery and setting the case for a immediate hearing in which both sides could argue their cases.

And seeing as how several pages after Hochberg palmed this problem off on Matt, the police presented Freddy with a preliminary injunction, that must have been exactly what Matt did. See, I told you they made it easy for me. Matt did everything right, so all I had to do was explain what he did and why it worked without the extra step I usually have to include of explaining what Matt should have done but didn’t do and why he should have done it.

Still all I said was that Matt made it easy for me, I didn’t say he made it painless. There was that extra scene when Matt complained to Foggy about his possible moral conflict. The DA’s office is supposed to promote justice, not shut down some guy’s business “because it gets on City Hall’s nerves.” Matt, baby, don’t invite problems. You weren’t shutting a business down because it got on Andrea’s nerves, you were shutting it down because it presented a legitimate health hazard. That’s a good thing and what you’re supposed to do as a DA. Don’t go worrying about problems that don’t exist yet.

If Hochberg tells you do to something at a later date which you think is wrong, then you can have your moral crisis. Don’t worry about it now, before he’s asked you to do that thing, whatever it is, worry about it later when he actually asks you to do it.

And considering how loose your legal ethics have been the past few years, I’m not so sure you’ll worry about it all that much later, either.