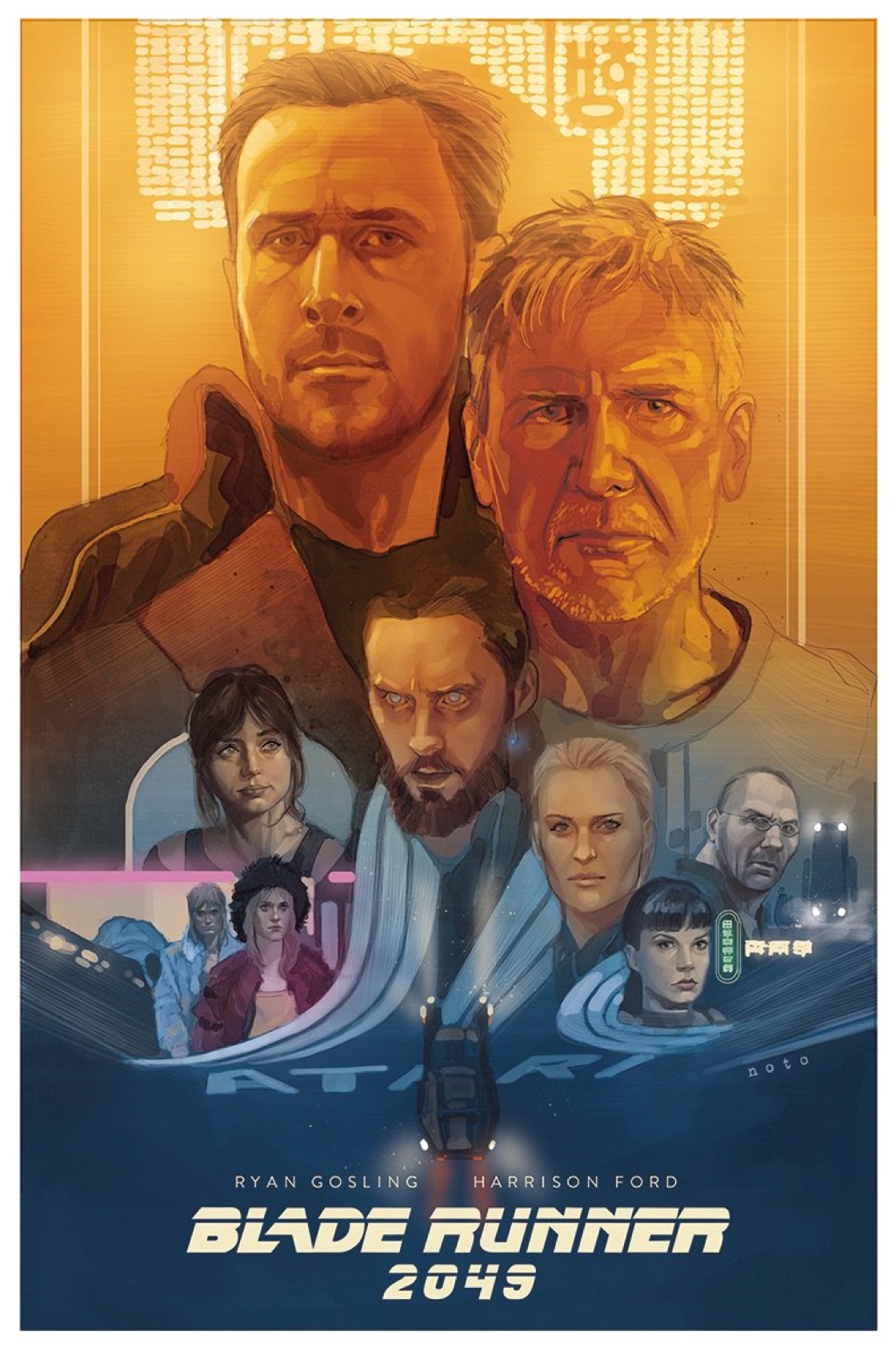 I often cite the original Blade Runner as my favorite movie.  I also think having one favorite anything is kind of silly so it’s always been less of a true answer as it’s been an indication of what I like.  I like cyberpunk, I like hard-boiled detective stories, I like being asked to think about things, and I like a movie that can spawn a conversation 30-some years after it came out.  I don’t know that Blade Runner 2049 has the legs for that last part but it hits all those other bits and so I have to say I liked watching it a great deal.  It’s a challenging movie and it makes some colossal missteps along the way— but it’s been fun to think about and talk about so far.

Denis Villeneuve is quickly becoming my favorite director.  I’ve spent a lot of time both here and in my personal life gushing about Arrival and this is such a big departure from this.  Arrival felt like a quiet movie and is practically art house next to the unending spectacle at play here.  This is a stunningly beautiful and well-composed movie.  You can see all the money they spent on this movie on the screen and you can see that someone with an actual eye for cinema was composing the shots.  The urban landscapes evoke the original film while borrowing from all the cyberpunk things that movie itself inspired in a ouroboros style self-inspiration.  The baseline test they subject Joe to are an incredibly harrowing cinematic experience and that’s incredible when you think that it’s really just a white room and a skewed perspective shot.  I could talk about different things I loved about the movie all day from the images of a blasted out Las Vegas to the flyover of a Los Angeles that is so overbuilt it almost looks like farmland but the thing that most consistently got me while watching it was the view from outside Joe’s apartment window.  It’s hard to explain but between the color and the proximity of his neighbors and the way it looks like my childhood window and also most definitely the far future proved this was good science fiction.

I don’t think it’s worth getting too far in to the plot because it’s a twisty winding kind of plot and it’s best experienced in person.  Also I feel like it would take forever to recap, and I would read it back and think I was a crazy person.  It feels overly complicated and subplots start and stop seemingly at random and some of the more interesting ones are just discarded never to come back.  There are countless screenwriting books that advocating putting your story beats on index cards to get a better map and it sort of feels like Blade Runner 2049 had seven cards they knew they wanted to hit and the rest of them didn’t matter and were just made as quickly as possible.  I want more from the plot, but a lot of the individual scenes work so well.

I don’t know what Ryan Gosling does differently than other actors when playing quiet roles but he’s on a whole other level.  He doesn’t have a ton of dialogue in this but he makes every word count and the work he does with expressions and movement is superb.  It’s like he took the quiet menace from Drive and turned it in to something that works all across the emotional spectrum.  Gosling is perfect for this role, for this movie.  I’m honestly not sure any other actor could have made this movie work but he does it.  He’s better than Harrison Ford in this.  He’s better than Ford was in the original.  It’s an amazing performance that will never get the attention of a movie like La La Land but shows so much more technique.

The gender politics in Blade Runner 2049 leave an awful lot to be desired.  Every woman in the movie seems to be trying to speak to some thesis about the commodification of women and their sexuality.  This is a fine point to make a movie about but it’s not what this movie is about, so it’s an observation with no critique which ends up looking an awful lot like just doing the thing you imagine they’re against.

I don’t know that Blade Runner needed a second chapter.  I don’t know that this movie needs to be so stuck in the past; it would probably be a better film if Deckard never showed up.  I wish so much that they had done more interesting things with basically every character.  This is a beautiful movie filled with missed opportunities, but for an almost three hour movie I was almost never bored.  There’s a lot to think about, there’s a lot to look at.  I appreciate that this is an attempt to make a deeper movie instead of a quick cash-in.  I look forward to watching this movie grow in time (and seeing the inevitable director’s cut) and seeing how I think about it in a few years.  If we had to revisit this world I’m glad we got as complex a take as this and one that pushes so many visual boundaries.