Thanks in part to a very mystical social media maven, Unshaven Comics has recently enjoyed a bit of a renaissance on our Facebook page. With an increase of likes and, more important, engagement, I’ve been able to hold some really great conversations with our glut of fans. Most recently (as of my writing this), I brought up the question of our favorite artists. I did so because, to me, nothing immediately draws us all into the world of comic books before the art… pun wholly intended.

It’s the depiction – be it overtly bright and heroic or gothic and moody – of worlds impossible to live in that ultimately usher us into the pulp. The writing may, in turn, drive us further into our individual fandoms, but I’ll always believe that the visuals of comic bookery are inherently tied to our collective appreciation. Individual artists will hold our attention more than others. As such, I wanted to share with all of you a collection of these illuminated illustrators of whom I have felt a deeper connection to, that ultimately led me on my own long and winding path to being a creator myself.

When tracking my love of comics, no artist comes to mind for me personally before Alex Ross. While I may have seen plenty of amazing illustrators in my youth prior, it was Ross and his affinity for the photorealistic that stopped me cold and forced me to enter into my now life-long love affair with sequential fiction. To see Batman, Superman, and Green Lantern per his brush, I was able to bridge the gap that had long stood between what felt like toy-box fodder and an art form. Not to dismiss the pantheon of amazing artists before him mind you. It was merely seeing heroes and villains in a new medium that opened my eyes to the potent pulp of Kirby, Ditko, and the like. Alex Ross makes the impossible seem possible, and because of it, his work on Marvels and Kingdom Come still remain my go-to examples when asked how best to break one’s self into the medium as a fan. 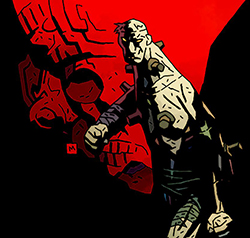 It was Alex Ross’s use of photo reference that calmed my own shaky nerves when it came time for me to dive into interior art. Knowing that I could use the tools of my fine art upbringing to help me build the worlds of the Samurnauts, I was able to overcome my lack of a skillset in creating something from nothing. It had long prevented me from ever trying to make comics. Seeing how Ross walked the line from a photo to a finished panel helped me, in my own meager way, do the same.

And let’s just go ahead and leap to the antithesis. Mike Mignola is one of those artists that captivated me the second I saw his angular and moody artwork. The way he balanced his awkward forms with garish shadows and minimal detail helped me see how an artist could make a world alien to our own even more alien. And because his work is most often simply colored, he helped me find an affinity for a less-is-more approach to a comic. While I myself can’t say that I see any of his influence in my own work… I oftentimes find myself with a comic or two of his on my side-table when I am in the very beginning of planning a page. And while someday I may trust myself to push my own style into a Mignola-esque direction, until then, I can simply enjoy the work he produces. 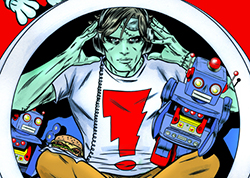 Like many of my specific generation, my honest-to-Rao first look of Allred’s work was the animated intro to Kevin Smith’s Mallrats. Mike Allred’s simple-retro-hipper-than-thou art leaped off the movie screen far better than the dialogue deluge of Smith’s Generation X stoner flick ever could. Subsequent deep dives into the X-Statix, Madman, X-Force, and others only deepened my considerable admiration. And above Ross or Mignola, Allred’s work is presently on the tip of my own tongue – artistically speaking.

Mike Allred’s clean lines, kinetic figures, and throw-back style is 1000% what is pushing me towards my newest endeavors in the medium. With my forthcoming submission in Mine! to the subsequent spiritual sequel in the Samurnauts series, I am working hard to push my style into a similar vein. At present, my odd mashing of photo-realistic figures with overly fussy coloring served its purpose; continuing to revisit Allred’s work is forcing me to do what the best artists do… reinvent myself to become more myself such as it were.

Next week, I’ll be focusing on the yang to the artist’s ying. Excelsior!