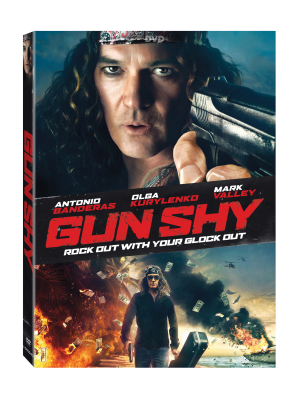 The hilarious and exhilarating action-comedy, Gun Shy, rocks out on Blu-ray™ (plus Digital HD), DVD, and Digital HD on November 7 from Lionsgate. Currently available On Demand, the film stars three-time Golden Globe® nominee Antonio Banderas (Best Actor: Evita, 1997; The Mask of Zorro, 1999; And Starring Pancho Villa as Himself, 2004) as a spoiled and aging rock star whose wife is kidnapped while they are on vacation in Chile. With very few skills beyond playing bass and partying, he must pull himself together to save his wife from her hostile captors. From Simon West, the director of Con Air, The Expendables 2, Lara Croft: Tomb Raider, and The Mechanic, and written for the screen by Mark Haskell Smith and Toby Davies (based on the novel “Salty” by Smith), the Gun Shy Blu-ray and DVD will be available for the suggested retail price of $21.99 and $19.98, respectively.=

When vacationing in Chile, an aging and pampered rock star’s (Antonio Banderas) supermodel wife is suddenly kidnapped by renegades. Unable to navigate more than ordering a sandwich from room service, now he must take to the backstreets of Santiago in this hilarious caper that is as entertaining and it is hair-raising.