John Ostrander: Riding With The King 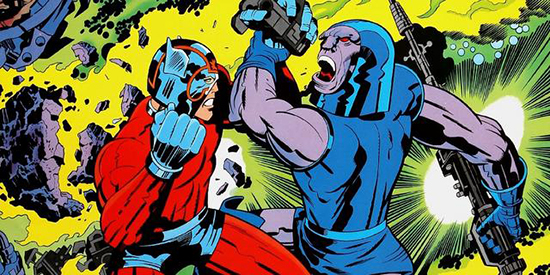 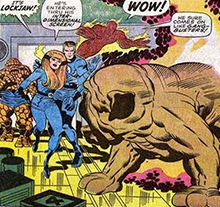 Last Monday was the 100th birthday of the King o’ Comics, Jack Kirby. The young’uns among you might not know the name (or maybe they do; I try not to be a fuddy-duddy most days) but Kirby was a force unparalleled in the comics medium. If you need a primer, Mike Gold wrote an excellent column about him.

I met him in person exactly once.

The first thing I need to explain is that, before I became a professional writer in comics, I was a bonafide geek. Yeah, I still am.

One of the big thrills when I first started was that at conventions I could meet my heroes as a fellow professional. In theory. Not as a peer; that suggested I was an equal and that was not how I felt.

So – it’s early in my career and I’m working the First Comics booth at the Chicago Comicon along with my wife, Kim Yale. We were the only ones working the booth at that moment. It wasn’t in the main room and we weren’t getting much traffic.

Then this small group of people walk by, talking among themselves, and in the middle of it is Jack Kirby.

(Point of historical accuracy: Back some 30 or so years ago when this story takes place, we never said “OMG!,” at least not in the Midwest. I just wanted to convey the impact of the moment in modern terms.)

Kim later said she watched me turn into a 14-year old fanboy complete with zits. I can’t imagine that was pleasant.

In the group, I spotted Julie Schwartz, himself a legend and an icon. There’d be no Silver Age DC without Julie. Possibly no modern comics industry.

I knew Julie a little through Mike Gold so I hiss at him, “Julie! Hey, Julie! Hey!”

Julie spots me and ambles over. “Hey, kid, how ya doin’?” 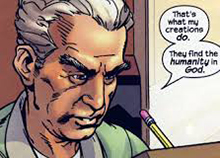 “Julie! Introduce me to the King!” I plead.

Julie looks at me like I’m demented and maybe, at the moment, I am. “It’s Jack,” he tells me. “Just go over and say hi.”

Julie gives me a pitying look and says, “C’mon, kid.”

I walk over to the group with Julie and he does a nice intro of me. The King shakes my hand, says “HiHowareya.” I babble something about what an honor gee you’re my hero blah blah blah. And it’s over. The King and his group move on.

I wish I could say that I never washed that hand again but Kim would have insisted.