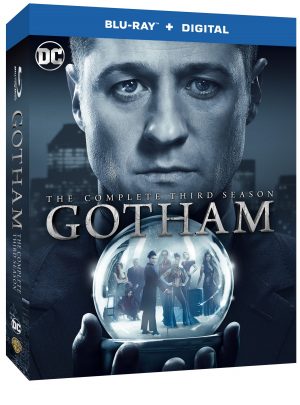 Despite their wealth and social status. Thomas and Martha Wayne were victims of random violence in a city filled with such acts on an hourly basis. The robbery and dual murders could have happened to anyone which makes Bruce Wayne a sympathetic character – he could be us. His training to become Batman resonates because any of us could dedicate ourselves both mentally and physical to perfection in order to prevent others from becoming victims.

Unless you’re watching the mess that is Gotham. There, the everyman aspect has been stripped away from the event so here, in this twisted version of the comics, we learn their murders was ordered by the Court of Owls which is somehow tied in to the utterly corrupt Board of Directions of Wayne Enterprises.

With Gotham The Complete Third Season out now on Blu-ray from Warner Home Entertainment, we can relive the harebrained plotted which moves at such breakneck speed Producer Bruno Heller hopes you don’t stop to consider each disjointed piece of the tapestry.

We open with “Mad City” for the first arc which sees the city overrun with the freaks freed from earlier in the series and the Penguin (Robin Lord Taylor) glorying in his control over them, which helps when his bromance/romance with The Riddler (Cory Michael Smith) devolves into a distracting war, setting up the “Heroes Rise” arc for the back half.  We have the freaks on one side and the tortured humans – Jim Gordon (Ben McKenzie), Barbara (Erin Richards), Tabitha (Jessica Lucas), and poor Butch (Drew Powell) on the other. The Owls fade into the background as the two sides snarl at one another for tense minutes at a stretch until Fish Mooney (Jada Pinkett Smith) steals Penguin away.

Burt before that, because it seems obligatory in every incarnation, the Penguin runs for mayor and actually wins, for a change. Running the city proves to be difficult (who knew?), especially when the Red Hood Gang is back and people are worrying about Jervis Tetch (Benedict Samuel) and his hypnotized victims. 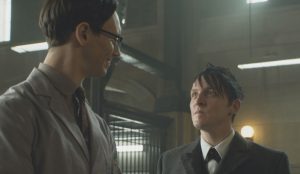 Heller likes brainwashing his characters such as poor Silver St. Cloud in an earlier season and now, midway through Season Three, he has the Shaman do this to teen Bruce (David Mazouz). Complicating things for everyone is his clone, 514A, trying to find a place for himself in the firmament. At least Bruce has an excuse for being wonky. Most of the other cast members are oddballs because the script demand sit without logical underpinnings. Case in point Lee Thompkins (Morena Baccarin) infecting herself with the Alice Tetch Virus. We then have the parallel plots of Alfred (Sean Pertwee) and Gordon trying to save the ones they love most. When Jim becomes infected, all seems lost so it falls to Alfred, Harvey Bullock (Donal Logue), and Lucius Fox (Chris Chalk) to save Gotham.

Things twist and turn, whether it makes sense or not, until we have an overstuffed finale featuring The Riddler, The Penguin, the Executioner (Michael Chiklis), Mr. Freeze (Nathan Darrow), Poison Ivy (Maggie Geha), Firefly (Camila Perez), Tigress, Talon (Brandon Alan Smith), Mad Hatter, Catwoman (Camren Bicondova), the Court of Owls, Hugo Strange (B.D. Wong) and Ra’s al Ghul (Alexander Siddig) before turning Butch into Solomon Grundy for this fall season. Normal citizens are now running amok, infected with the Tetch Virus, detonated by the Court, so there’s anarchy on the streets of the beleaguered city. It is at such a moment a Dark Knight should rise to protect the city and its inhabitants but now, Batman doesn’t exist yet. So the duty falls to an infected Gordon, acting closer to Judge Dredd than anyone else. 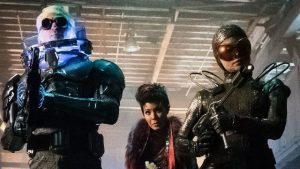 Don’t worry, though, Bruce is taking those first tentative steps towards bat-hood as he dons ski mask and tactical turtleneck to stop evil in Crime Alley. Never mind he has yet to be properly trained in anything for any length of time for him to get proficient. He’s been too distracted by the insanity around him.

Some seem to really like this bouillabaisse of a series, appreciating its frenetic pace and over-the-top performances. The season rates 89% at Rotten Tomatoes so I am clearly in the majority. So be it. The 22-hours are nicely transferred to high definition with the same quality of audio.

Scattered among the four discs are Special Features including Gotham: 2016 Comic-Con Panel; Madness Rising: the New Villains of Gotham, as producers discuss each new rogue added to the expanding cast; The Dark Within the Dark: The Court of Owls; Ben McKenzie Directorial Debut, exploring the actor’s turn behind the camera; and an assortment of Deleted Scenes, some of which are fun.