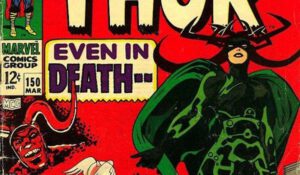 Jack Kirby would’a been 100 today! The best part about it all is that the world can take a break to smile and to be astonished at this man’s incredible imagination and talent.

As you probably know, Jack Kirby was a tough, scrappy kid from the tough, scrappy part of New York City that grew up to be a very important comic artist. Kirby was a guy who made countless contributions and created a phenomenal number of characters and even launched a few genres. He was also a veteran of WWII and a family man.

But as a big comics fan, I almost loathed his work! But my entry point to Jack Kirby, where I really first noticed the man’s work, was with an image that was SO hideous and SO disgusting that I was worried I’d have nightmares forever.

Here’s what happened. As a very young boy, my Dad bought me an issue of DC’s The Demon. My (very generous) Dad would let me chose one comic every Sunday after feasting on our Sunday dinner at my grandmother’s house. The Demon was not one of the usual comics I was reading at that time, but the cover must have grabbed me and I selected it that week.

When I read it, I was absolutely horrified by one particular full page image. It depicted a character who’s face was horribly disfigured. I didn’t realize it at the time, but it was sort of an homage to a scene in the classic Phantom of the Opera movie.

The character screams, “My face! It took my face! Look!” And as a nine-year old, I had to look. I couldn’t not look. It was the most horrible thing I had ever seen.

I was just starting to read the creator credits on comics at that time. I thought: “This Kirby guy is awful!” I realized – then and there – that I should always avoid Jack Kirby comics.

Not long after that, as Kirby was returning to Marvel Comics after several years working for the publishing competition, I was perplexed by the titles he was creating.  Devil Dinosaur was supposed to be the work of a genius? What was I missing?

It took me a while to understand it all. Sometimes I’m a bit slow on the uptake. But I would eventually figure out that one gruesome page was certainly not what the genius of Jack Kirby was all about.  I’d spend years and years later trying to understand the genius of Kirby. I now realize I can’t fully comprehend everything this great man created, but it’s so much fun to try. Reading his work is always treat. It’s both a thrill and creativity to be celebrated.

I hope you treat yourself to a little Kirby today too.

I’ve been invited to the Buffalo Comic-Con this year. I’ll be on their Jack Kirby at 100 Panel. The convention is September 31 to October 1st – hope to see you there! For more details, check it out here!