Marc Alan Fishman: So How Do I Get My Kids Into Comics? 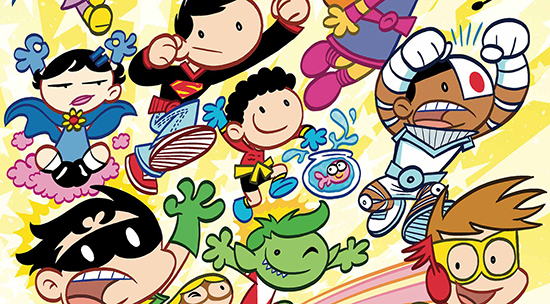 Last week I got a little hot and bothered over Dan DiDio and Jim Lee’s declaration that their holy trinity (and let’s assume all the rest of their ilk) were being introduced to would-be-suitors for the third time via the printed page. They sought to make the comic shop the first meeting point between the kiddos (you), and their heroes (you know, the ones with the muscles and tights). Simply put, it’s a cute idea but it’s pretty much impossible to pull off.

It leads me to this week, where my good friend (and real-life Wolverine) Todd asked me point blank: so how do I get my kids into comics? Well, bub, here’s my step-by-step guide:

Let’s not split hairs here. It’s astoundingly simple to flip on a show, YouTube clip, or take the family to the matinee. Especially for pre-literate wee-ones. The screen is a part of their lives from birth unless you’re one of those holier-than-thou-hipster-parents who turn your noses to such savagery. You can’t shake a stick these days without hitting something comic related that will speak to your li’l lads or lasses. Ray gun to my maw? Teen Titans Go! is as great a place to start as any. Proof in point: My five-year old has been watching since the pilot aired, and still regularly calls me “Dude” because of it. When a show/clip/movie hits the mark, you’ve got the spark.

For me personally, it was stumbling over the Adam West Batman – more specifically the Dick Sprang inspired animated intro that truly made me pause and glue myself to the set – that would lead to my first foray into comicdom years later. Had I a time-machine I’d find that younger me and immediately take that newfound curiosity and stoke a fire with actual comics.

Much the same, I propose that when your wee-one has sunk their teeth into a character, it’s time to take their love to the page. If Teen Titans tipped their curiosity, introduce them to Tiny Titans. It’s just as funny, just as accessible, and widens the breadth of known commodities with aplomb. Or, take a horizontal swing from the Titans to their adult counterparts. The Justice League comes in a veritable rainbow of iterations – one is bound to suit the proclivities of your scions.

A few movies or TV shows got them hooked. The comic (or related adapted kids books, etc.) hinted at a larger landscape. Now, with them invested… show them the world! The best part of the age in which we live now is the access afforded to anyone with an attention span. To like Teen Titans Go! is to like team action adventures. From that single precipice, you can leap across the aisle to Avengers or X-Men. Or, be bolder, and let your hellspawn into the realms of the smaller creator-owned fodder. I’d give a kid Molly Danger a hundred times out of ninety-nine versus anything Marvel or DC published. The key here is simple: A trip to the comic shop should come with an invitation to be curious.

Even if the words are above their pay-grade, comics have pictures for a reason. Give your kids the keys to a castle choked to the moats with possibilities. Now, all that’s left is to close the deal with a pair of key action items.

Be it big or small, a full weekender or just a day-trip, attending a comic con is a rite of passage every lover of pulp and paper should take in. In the real world, comic heroes may be mainstream but the books they hail from are still a niche market. They open up the realm of the fandom to innocent eyes. The very first time I went to the Wizard World Chicago show, it felt literally larger than life. In a convention hall bursting at the seams with comics, toys, cartoons, and anything else I could imagine, it was seeing thousands of like-minded ne’er-do-wells rifling through long boxes, and debating at panels that really stuck with me. To know that beyond those at my local shop, there existed a community gave me a sense of self that stoked the eventual fire to become a creator. Which leads me straight away to my last suggestion.

Let their mind run wild. There’s a visceral universe living and breathing behind the cookie crumbs and desire to play video games. For those you are trying to will into nerdery, I offer no better advice than to invite them to create. When a child becomes the owner of an idea, I believe it bonds them not only intrinsically to the notion itself but to the world from which it stems. Be it anime, a random cartoon, a specific action figure, Lego playset, or, yes, a comic book. Give them the task, and open the floodgates. Before too long, you’ll be taking them to the comic shop on the regular, you know… for reference.