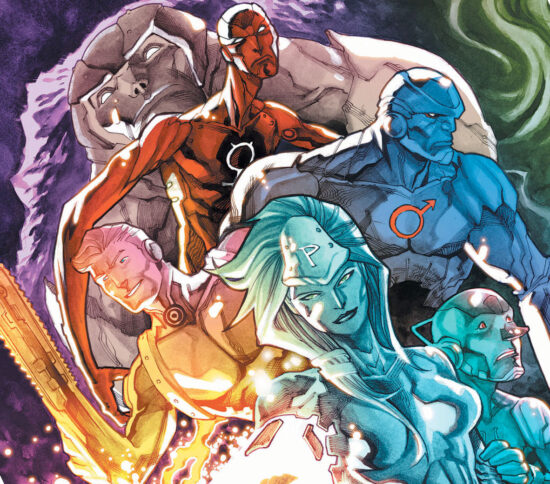 René Descartes once said, “cogito ergo sum,” which, for those of us not fluent in dead languages means, “I think, therefore I am.” René’s observation was pithy, but it leaves one question unanswered. I understand that because I think, I am; but what, exactly, am I?

What am I also happens to be the question raised in the Metal Men story in Legends of Tomorrow #4, “Everything Old Is New Again!” Or, more precisely, What are the Metal Men?

Technically speaking, and speaking technically, the Metal Men are androids. They were created by Dr. Will Magnus when he put advanced thinking devices called Responsometers into some vats of molten metal, one Responsometer per vat, and vat’s a lot of metal. The Responsometers caused the metal in the vats to form metallic bodies around themselves. The resulting bodies – one for each of the vats of metal used – had the properties of the metal which formed them. The bodies were also, thanks to the A.I. properties of the Responosmeters, “self-actualizing entities capable of making their own decision and independent thought.”

Magnus made several of these Metal Men – Gold, Iron, Tin, Mercury, Lead, and Platinum– all of whom had artificial intelligence thanks to their Responsometers and incredible metal-based powers. The Metal Man had the potential to be agents of incredible good, so naturally Army General Thelma Scarletti wanted to dismantle the Metal Men and harvest their Responsometers for her own purposes. Because what’s a general in a comic book if not self-interested; obsessed; lacking any morality; and, you know, basically evil? Seriously, is there any high-ranking military officer in a comic book who isn’t an offal sir not a gentleman? I shudder to think how Amos Halftrack would behave if DC were ever to license Beetle Bailey.

Only Cliff didn’t show up as Robotman, former daredevil who had nanomachines injected into himself which created a new robotic body around his still-living brain when his old body died in a car crash and who became a freelance super hero. Instead he showed up as Clifford Steele, attorney-at-law. Not just an attorney, but an attorney who found a sympathetic judge who issued a writ of habeas corpus releasing the Metal Men into Cliff’s custody until a court case could resolve the issue of whether the Metal Men were robots with artificial intelligence or living beings with the full panoply of constitutional rights.

Now this revelation raises a couple of questions. First, when did Cliff become a lawyer. No, seriously, when? I’m not saying that Cliff couldn’t have gone out and secured himself a law degree at some point, I just don’t remember him ever doing it. Was this something he did while he was still an adventurer and daredevil before he got his robot body or something he did to fill those idle hours while he was sitting around waiting for clients to hire Robotman, freelance super hero? Okay, it’s not an important question, but it’s still one I wondered about.

The important question is where did Cliff find a judge who was so sympathetic he or she would willing to grant the Metal Men a habeas writ before the trial which was to decide their legal status? The Fourth Amendment says that “The right of the people [emphasis added] to be secure… against unreasonable searches and seizures, shall not be violated.” So the Fourth Amendment only applies to people. You couldn’t, for example, get a writ of habeas corpus to force the police to return your Mr. Coffee if it had been illegally seized during a warrantless search. The Mr Coffee is a mister in name only; it’s not a person.

That doesn’t mean there was nothing Cliff could have done. There is a perfectly good writ that can be used to return property that has been illegally seized. It’s called the writ of replevin. Cliff could have filed one of those saying the Metal Men should be returned to Dr. Magnus as his property, until such time as a court could determine whether they were property or people.

Wouldn’t that also mean that the judge issuing the replevin writ is deciding the ultimate issue? After all, wouldn’t he be implicitly ruling that the Metal Men were property by granting a replevin on their behalf?

The Metal Men are androids. They are presently regarded as machines and the law would presume that they are machines until such time as a court ruled them to be people. Thus a judge could grant a replevin because of the Metal Men’s current presumptive status as machines without any ruling, implicit or otherwise, on the ultimate question of the trial; are the Metal Men actually living beings?

So what do you think, are the Metal Men simply robots? Or are they living beings and greater than the ergo sum of their parts?