Martha Thomases: Getting Your Nerd On? 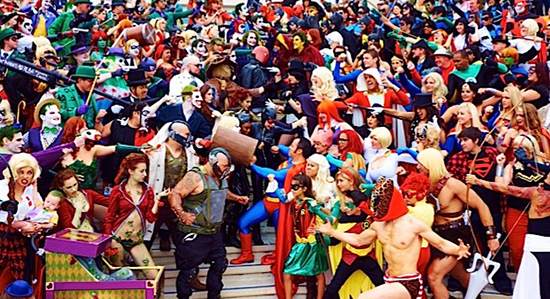 The San Diego Comic-Con is next week, and I’m going through my annual trajectory of feelings.

On the one hand, I like comics. I like a lot of the people who work in comics. Twenty years ago, I had a great time when I went because San Diego is a lovely city and it’s pleasant to walk out of the convention center and see palm trees. 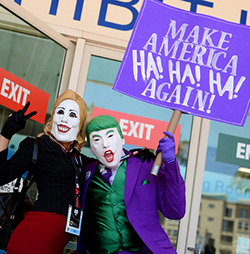 On the other hand, I don’t like huge crowds, and SDCC has only attracted more of them. I don’t mean to begrudge anyone their good time, but I don’t necessarily want to be jammed in the middle of it. Especially when their good time is more and more about pop culture in general, and less about comics specifically.

Yes, you can still go and wallow in the sweet, sweet mud of comics love. My experience, the last time I tried, however, was that I still had to struggle to get a seat, because people who wanted to see a television star or a movie preview four panels from now had taken all the good spots. And this was not Hall H.

This year, I’m noticing a change in the tone of the pre-Con hype. Perhaps this change is all in my head, influenced by my contradictory feelings. There was a time when SDCC was “Nerd Prom,” a place where those of us who were never accepted by the cool kids could have our own space, our own definition of “cool” that included us.

And then, the really cool kids noticed us. Hollywood came to court us, to flatter us, to assure us that they, too, loved comics and cartoons and science fiction and fantasy. Movie stars competed to prove they could differentiate Stan Lee from Steve Ditko, Jack Kirby from Neal Adams.

I wanted to believe. If nothing else, it would give me something to talk about with my future husband, Robert Downey, Jr. In any case, even if they were only reciting lines that had been fed to them by publicists, it showed respect to the stories that we loved. 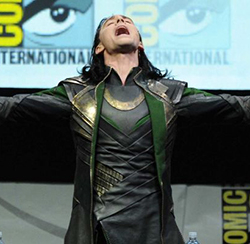 It was a nice gesture.

Lately, I’m not sensing the same respect. Just as in the episode of Entourage referenced above, I sense less a sense of affection for comics and fandom than a sneering sense of superiority. Yes, some of us like to dress up in costumes. Some of us like to talk for hours about obscure facets of our favorite genres. Some of us look forward to a chance to meet the talent whose work has brought us so much joy.

We don’t go to watch from the outside as Hollywood parties. We had enough of the outside in high school, thanks.

We don’t go to provide easy laughs for guys from Harvard too lazy to look beyond the obvious. We love comics for our own amusement, not yours.

So how can you get your geek on without becoming an unwitting accomplice to your own abasement? One solution that works from is going to smaller conventions. The focus tends to be more on comics, and there is more chance to interact with guests as well as other convention goers. It’s also usually easier to find a place to eat and a hotel room close to the show.

For the record, I’m not saying that everything I like at SDCC is cool and everything you like is not cool. Nor am I saying that geeks are never so ridiculous that one can’t laugh at them derisively.

I’m just saying that we don’t have to put on a show to get ridiculed by Hollywood. We don’t have to be so grateful for their attention that we become their dancing bears. Although that might be a cool costume.