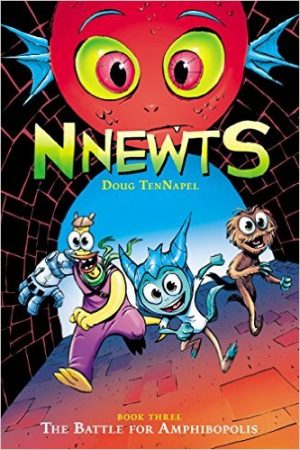 Doug TenNapel concludes his most ambitious work yet, the fanciful, energetic world of the Nnewts in this final volume, As with every other series from Scholastic’s Graphix imprint, it provides no synopsis so one hopes readers can keep track of the sprawling story with volumes coming a year apart.

And that’s the biggest concern with this book aimed at 8-12 year olds: it is so large and complex a tale, with so many characters, and a complicated mythology and internal logic that on the surface it’s a confusing mess of kinetic energy.

As introduced in Escape of the Lizzarks, we are introduced to the residents of Nnewtown and its wide assortment of characters. They are being threatened and it falls to young Herk to embark on a journey to save everyone.  The Rise of Herk raised the stakes as the Snake Lord is back and is the Big Bad.

Now, the players are in position for the finale as we find Herk slowly turning into a Lizzark and abandoning his Nnewt friends. His siblings, Sissy and Zerk, have also been corrupted by evil and the Lizzark army is still threatening Amphibopolis with total destruction. Along with the action, we get Orion, the god of creation, arriving and dealing with the jealous Anthigar, the Snake Lord. Things grow in scale and get very cosmic and metaphysical before the dust clears and peace is, of course, restored to the people.

Peel away the slapstick, the running, jumping, mythmaking, and other noise, and this is a story about family. Herk was separated from his family at the outset and here, he cannot complete his quest without the help of his siblings. He makes a huge sacrifice but it’s a knowing one, with appropriate consequences as a result. Launa, robbed of mobility and confined to wheelchair, also is an excellent role model for readers as she does not let her handicap define or restrict her so her arc is a satisfying one.

TenNapel has a good handle on page design and pacing, ably assisted by Katherine Garner’s superb colors. His dialogue is also age appropriate with enough silly stuff to amuse the younger end of his readership while introducing strong themes for all. If anything, I wish his frenetic storytelling would slow down a bit for more character but he has a winning formula so who am I to complain.

If you’ve enjoyed any of his other work, this is sure to satisfy.