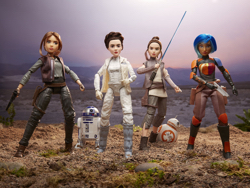 People would say, “Your kids are going to be so lucky” when they looked at all the toys on our shelves.

John and I would say, almost in unison, “Those are not for kids to play with. We have them to have.”

I completely understand the lust for acquisition that inhabits your average toy collector. I love my toys. I miss the smell of caps.

But beyond the joy they bring to me, personally, I think toys are important for a lot of reasons. Most important, they are the means by which children discover the world. In that, they are as important as other media, whether it be television or music or poetry or dance.

That’s why I think this development is fascinating. For lifetimes, toys marketed to girls have emphasized either the role of mother (toy ovens and vacuum cleaners and baby dolls) or passive object of beauty (Barbie). But because of changes in society (and therefore changes in marketing), things might be different now. 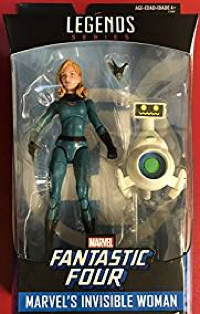 A much larger segment of the toy market is made up of licensed products, often from major studio movies, with large casts and lots of explosions. This is not a new development, but rather an increase. When movies cost so much to make, and with limits as to how many movies an average person can go see in any given year, the studios are looking for as many other revenue streams as possible. So, toys!

When I was a girl, and even when my son was a child, there were strict gender differences in the way toys were sold. There were “boy” toys and “girl” toys. As a child, I accepted this as the way of the world, although thanks to shows like this and this https://www.dailymotion.com/video/x47l89v, among others, I insisted on having that aforementioned cap gun. For my son, I bought dolls and stuffed animals as well as trucks and cars. Just because They wanted to raise my kid to their gender standards didn’t mean I was going to do so.

And I wasn’t the only one. Today’s parents (or a segment of them affluent enough to be attractive to retailers) don’t want to limit their kids’ ambitions in those ways. So while Disney still makes a lot of money with its Princesses, they are also allowing that some girls might want to be fighter pilots against the Empire.

As a fan of superheroes, I’m thrilled at the thought of more toys for girls who also want heat vision and lassos of truth. I’m excited that they can imagine themselves to be part of the Avengers or the Justice League.

My fear (and I have one) is that because comic books are aimed at a much more diverse audience than they were when I was a kid, some parents might not realize that not every comic book is appropriate for their particular children. Just because there are toy tie-ins doesn’t mean the story won’t scare the crap out of a five-year-old. Personally, I think it’s immoral to sell products based on R-rated movies in toy stores, but I am not the Empress of the World. If adults want to collect items based on their favorite stories, whatever those stories might be, that’s swell. I’m not talking about taking away their joy. I’m talking about the possibility that parents might buy a toy electric chair just because it was in a comic book, without doing the research to find out what kind of comic book it is.

Given our political climate, there may very well be parents who think toy electric chairs are exactly how they want their kids to discover the world. If so, I hope they are upfront about it so I can keep my family away from theirs.