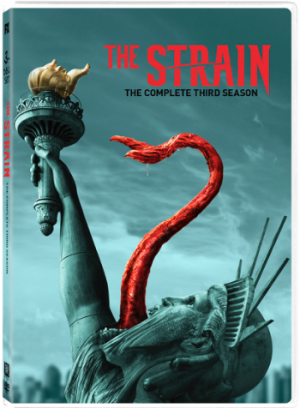 THE STRAIN: THE COMPLETE THIRD SEASON
The war between the bloodthirsty strigoi and the remaining human survivors of New York intensiﬁes in the chilling third season of The Strain! Although Dr. Ephraim Goodweather’s (COREY STOLL) bioweapon initially helped stave off the vampiric creatures, they have evolved into a bigger threat to humanity than ever. Now, distraught over his kidnapped son, Eph teams with Dutch (RUTA GEDMINTAS) to search for signs of weakness in the strigoi. Meanwhile, Abraham Setrakian’s (DAVID BRADLEY) discovery of a mysterious shipment from Egypt brings a shocking realization in this pulse-pounding show ﬁlled with intense sci-ﬁ action and thrilling plot twists.