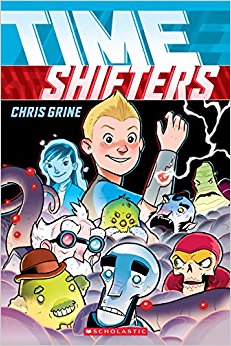 Everyone processes loss in different ways. For young Luke, it’s been a year since his older brother died in a bullying incident. He’s still mourning when he sees something fantastic, goes to investigate, and gets swept up in a time travel, inter-dimensional romp that lasts almost the entire 266 pages of Chris Grine’s busy Time Shifters.

He stumbles upon three of the dumbest henchmen found in YA graphic novels — a skeleton in a pressurized space suit, a hollow mummy, and Vampire Napoleon – and winds up wearing their objective, a piece of tech that lets him cross dimensional boundaries. In the process, he buddies up with a scientist, a robot Abraham Lincoln riding a mutant T-Rex named Zinc, and Artemis, a sassy female ghost about his age.

Grine, best known for his Chckenhare, presents a done-in-one story that moves quickly, too quickly. There’s a lot of running, jumping, chasing and similar kinetic nonsense that does little to actually explain what’s really happening. Grine is a solid storytelling and has inventive character designs but there is no rhyme or reason to the having a Napoleon vampire or robot Lincoln. It’s just oddity for oddity’s sake when there should be a reason.

Similarly, when they spend a large chunk of the story in the other dimension, it is styled after frontier western town from the 19th Century. Why? I don’t know. He’s on a third and I don’t give a darn. Seriously, the lack of internal logic robs this imaginative story from being exceptional. There are some large themes to work with but Grine seems almost afraid to tackle them head on.

The tonal shifts occur throughout the book so you think you’re reading one thing then we’re on to another and you feel the whiplash. As a work intended for 9-12 year olds, it doesn’t make a whole lot of sense and may result in them finishing the book feeling dissatisfied despite an emotionally rousing epilogue.

Because Grine is moving at such a fast clip, any attempt at characterization is left to a few panels here and there so none of the characters, including Luke feel anything more than chess pieces.

Scholastic Graphix feels strongly about this, offering an excerpt as part of Free Comic Book Day, but this is far more of a misfire that should have been more carefully planned and edited.