John Ostrander: Wait. What Was I Thinking? 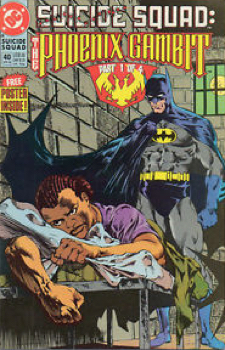 On May 23, DC will release the sixth volume in their TPB reprint series of my Suicide Squad work. It’s sub-titled “The Phoenix Gambit” and, as is my wont, I’m going to share some thoughts about the stories therein. This might actually take a few weeks.

The volume covers issues 41 through 49 and, with one exception, was co-written with my late wife, Kim Yale. It was at this point that we shook up the Squad (and the book) to a large degree. When we last left the Squad in issue 40 (and the end of the previous TPB), the Squad had disbanded or dispersed. Amanda Waller was in jail as a result of her hand in executing the criminal gang calling itself the Loa; she just surrendered and, at the time, many people both within the book and without wondered why. Why didn’t she fight it? Why didn’t she scheme to get out of it?

In one of the stories in this issue, Amanda explains why to a friend – she felt she deserved to go to jail, that she had stepped over the line. This re-enforced the fact that, so far as I was concerned, Waller has always had a conscience of some kind, even when she crossed it. I think that’s the main difference between my Amanda and the film’s Amanda – mine is not a sociopath. Please note: this is not a criticism of the film; they wrote the character as they saw her, as they needed for their story. Mine is just a bit different. The first story starts with Waller in a prison cell in Belle Reve and the caption “One year later.”

This was slightly controversial at the time. There were fans who felt this now put the Squad out of sync with the rest of the DCU. Kim and I weren’t overly concerned about that; we figured over the run of the stories, they’d even up. It was important to Kim and I that the time elapse between the end of the last story and the start of this one. Not only did Waller need time out, some of the other characters need time to elapse as well.

Sarge Steel approaches Amanda in her cell. (Steel also works in the Intelligence biz and he and Waller have been at loggerheads since the Squad began.) He could use her help and advice with a problem and makes her the same deal she made others – do the job, succeed, survive, and get time off your sentence.

Amanda smiles at him; she’s been waiting for this or something like it. She has a counter-offer. She gets a presidential pardon; she gets to put a Squad together like before, they work without governmental ties or oversight, and they get a million dollars. Oh, and Batman has to help with the first mission.

This would be one of the big changes in the book; no more Belle Reve, no more supporting cast. Smaller Squad and, for the most part, no costumes. Every day clothes. They were free agents. More expendable than ever and the U.S. Government had less (or no) control over them (and especially Amanda).

These were significant changes. The book was over three years old and time, Kim and I thought, for a shake-up. While the new direction seemed to me at the time to be a good idea, in retrospect I’m not so sure. Fans can be a conservative bunch; they tend to want the same thing each time but different. That’s a hard trick to pull off. Don’t you need the characters in costume to really know who they are? It could be argued that Deadshot’s costume WAS the character. In losing the Belle Reve, we lost not only the Squad’s HQ but a genuine character in the series.

It could also be argued that having the characters running around in costume negated their being a covert action bunch. This seemed more “realistic” although realistic in this context is somewhat malleable. It also got Waller more out into the field as part of the operation rather than waiting at HQ and that seemed to me to be a better idea.

The Squad itself was a somewhat different group. Deadshot and Captain Boomerang were givens and Vixen and Bronze Tiger were regulars although we had messed with Tiger a bit, scuffed up his “good guy” image. They were joined by Count Vertigo and now Poison Ivy and the modern Thugee, Revan, who previously had been a Squad opponent, working with the terrorist group, the Jihad.

They were also joined by the Atom or, shall I say, an Atom. It appeared that Ray Palmer was killed in an explosion and a new Atom, named Adam Cray, had taken his place. Most the of the Squad members (and many readers) believed that Cray was actually Ray Palmer; they thought Palmer had, for some reason, faked his own death and was now assuming a disguise.

I always felt that the Atom would be an ideal member of an espionage team, especially the Squad. His ability to shrink could make him an ideal spy and so, when he became available to us, Kim and I jumped at the chance – albeit with our usual touch of twistiness.

The Phoenix Gambit also included the Russian equivalent to very early Superman crossed with Captain America, Stanoivolk (“Steel Wolf”). And Batman. Lots of Batman. In fact, the first chapter of The Phoenix Gambit could almost be thought of as a Batman story. He’d stick around for the other three issues as well. No great mystery there – Batman already had a history with the Squad and doing something of a crossover could be a nice way to boost sales, Especially at this stage of the Squad’s history.

Getting ready to write this column (and the next few) gave me a chance to go over the volume myself; I hadn’t read most of these in more than a decade. I think, as a whole, they’re among the strongest in the series. Kim and I were really hitting our stride and there are places where I can clearly see her hand and hear her voice. There’s a place where a drugged and deranged Count Vertigo gets all biblical while in battle. That was almost certainly scripted by Kim; her father was an Episcopal minister and she knew the well from which she drew.

The main artist at this point was Geoff Isherwood who had been one of our inkers for a long time. He gave the art a nice illustrative feel while, at the same time, keeping the down and dirty realism the book required. Luke McDonnell, our original artist, would return here and there but the bulk of the work is Geoff’s and he does a fine job.

Well, that does it for this week, my li’l Squadders. Join us next time when, among other things, we’ll talk about our Secret Origin of Captain Boomerang and how that came about. That’s next week – same Squad time, same Squad channel.