Mindy Newell: Jumping In On Doctor Who 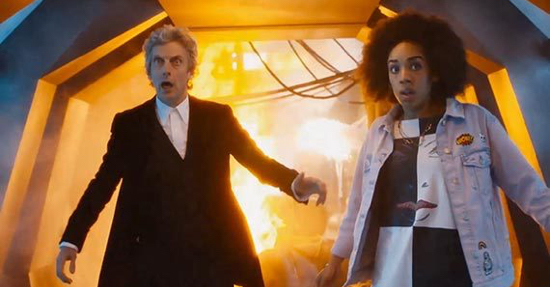 The Doctor: “Time is a structure relative to ourselves. Time is the space made by our lives, where we stand together forever. Time and relative dimension in space. It means life… This is the gateway to everything that ever was and ever can be.
Bill: …Can I use the toilet?

My daughter Alixandra has wanted to watch Doctor Who but she’s been intimidated by the idea of catching up with 50 years of the show’s history. Hey, who wouldn’t be? I told her to start with “new Who,” with Christopher Eccleston’s as the 9th Doctor, which was “only” 12 years ago (is it really over a decade already?) and that “Rose,” the first episode, would do a great job of hooking her into the basics – although she already sorta knows them, as she remembers me watching the Tom Baker years of Doctor Who when the show aired on Saturday mornings on Channel 13, the New York City PBS station.

She was very young then, not much more than a toddler, so that was a surprise to me – as well as a lesson to grown-ups: be careful what you say around the young ‘uns. Apparently, little pitchers really do have big ears.

I also sent her a list of shows from a website I found, “Desperately Unrehearsed,” which lists every episode from the aforementioned “Rose” to Matt Smith’s dénouement, “The Time of The Doctor,” with a pretty good opinion – at least one I basically agreed with – of what was essential and what was not (along with YMMV).

But I also just sent her a text: “The 10th series premiered Saturday night. It’s called “The Pilot,” and it might be a good place for you to start, as it introduces a new companion and reintroduces the basic ideas.”

She sent me back a “thumbs-up” emoji.

I texted her back a few minutes later, because I forgot to say in the first text: “Plus, Peter Capaldi.”

Fans of Outlander (me, included) are currently suffering from what is known as the “Droughtlander,” – the last episode of Season 2 aired on July 9, 2016, and the series is not returning to Showtime until September – but the wait for Series 10 of Doctor Who has been interminable. The last episode of Series 9 (“Hell Bent”) aired here in the States on December 5, 2015. We did get two Christmas specials, the first run three weeks later on December 25, 2016 (“The Husbands of River Song”) and the second (“The Return of Doctor Mysterio”) a year later.

Outlander is not even giving us that…

But was the wait worth it?

“The Pilot” was not only a singularly great show all by itself, it was also a fantastic kick-off, with past and future colliding – dialogue that was timey-winey-twisted; pictures of a lost wife and granddaughter; sonic screwdrivers from just about every regeneration collected in a jug; and a vault (reminiscent of the Pandorica box) that the Doctor is protecting.

The trailers featuring Pearl Mackie as new companion Bill Potts did not exactly excite me, nor did they do Mackie any justice. The “big” news that Bill is gay. However, and that’s a big however, I was completely charmed by Ms. Mackie and her character by the half-way mark of “The Pilot.” That is way faster than I turned on to Jenna Coleman’s Clara Oswald, Karen Gillian’s Amelia (Amy) Pond, and Arthur Darvill’s Rory Williams. The only companions that equal the speed with which I fell in love with Bill Potts were Elisabeth Sladen’s Sarah Jane Smith (of course!) and Billy Piper’s Rose Tyler.

I wasn’t all that impressed with Matt Lucas’s Nardole previously, not in “The Husbands of River Song” nor in “The Return of Doctor Mysterio.” But in “The Pilot,” Nardole came into his own; he is the bridge between the Doctor and Bill, and the bridge, I think, between the universe of Doctor Who and ours, the “Greek chorus” of the audience, of us.

Stephanie Hyman’s Heather, the girl with the star in her eye, was eerily beautiful, bewitching, chilling, and ultimately heartbreaking. And by the way, Ms. Hyman, kudos to you for playing 90% of your part soaking wet.

I also want to give a shout-out to “The Pilot’s” cinematography, editing, and special effects.

As for Peter Capaldi; well, im-not-so-ho, Mr. Capaldi will become, as he leaves the show behind and moves on with his life, one of those Doctors who will leave an indelible mark upon the character and the 50-year history of Doctor Who. If you must go, Mr. Capaldi, then you must…

But I wish you weren’t.