REVIEW: Batman: The Brave and the Bold The Complete Third Season 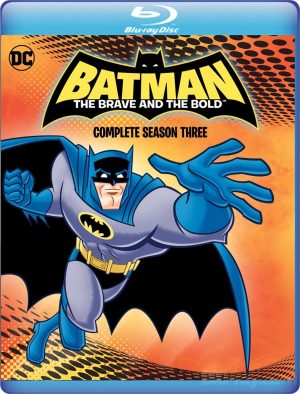 Well, it’s about time. For the last twenty-five years or so, we’ve had one animated Batman series after another but to be honest only two are really good: Batman the Animated Series and Batman: The Brave and the Bold. The latter has been slowly coming out on Blu-Ray with season one in 2013 and season two in 2015. This month, we’re getting the third and final season and the good news is that it is as entertaining as remembered.

After increasingly odd interpretations of Batman, Warner Animation decided to go retro and bring back the Batman of the 1960s, who was not afraid to operate in daylight and would partner with just about anyone in a mask as the need arose. Producer James Tucker saw to it that it honored the comic the series took its name from while modernizing it with contemporary characters and characterizations. The result was a delightful thirty minutes for three seasons and now we get the final thirteen installments.

Episodes 53 through 65 continues to have Batman (Diedrich Bader) mix and match heroes and villains, zaniness from emotional intensity and serving up action, laughs, and fine vocal work. Each episode has a teaser bit that as often as note, relates to the main story, allowing for tonal variety. We open with “Joker: The Vile and the Villainous!” as the Clown Prince of Crime (Jeff Bennett) comes to appear in the majority of the story, much to the Caped Crusader’s chagrin. It also shows how deep into the vault they will go for characters as they resurrect the Weeper (Tim Conway) from Bulletman’s exploits in the Golden Age of comics.

Throughout the season we see Batman dealing with Justice League International as Blue Beetle (Will Friedle) continues to grow as a hero and Captain Atom (Brian Bloom) is welcomed to the team.

We jump around Batman’s career as we see him partner once more with Robin (Grey DeLisle) to take down goes including Catwoman (Nika Futterman) and King Tut, as a nod to the 1966 TV series in addition to time travel tales that involve Kamandi,

There are Easter Eggs aplenty and many a reference to elements and stories from the comics themselves such as “Night of the Batmen”, taken from the eponymous comic book version, which was inspired by a story from Batman #177, as an injured Batman watches Aquaman (John DiMaggio), Captain Marvel (Jeff Bennett), Green Arrow (James Arnold Taylor), and Plastic Man (Tom Kenny) don the mantle of the Bat to protect Gotham City from Deadshot (Kenney), Cavalier (Greg Ellis), Babyface, Killer Moth (Corey Burton), and Sportsmaster (Thomas F. Wilson). Another episode was taken from 1976’s DC Superstars Giant #10. Then you have a variation on an old 1950s story as the Batmen of All Nations are confronted by the Jokers of All Nations (I’m genuinely surprised Grant Morrison didn’t come up with this first).

As the series wound down, the penultimate episode pulled out all the stops with four vignettes that focused on the guest stars over the title hero. We have “Adam Strange (Michael T. Weiss) in Worlds War” as Kanjar Ro (Marc Worden) makes his second appearance this season; “Flash (Alan Tudyk) in Double Jeopardy” with appearances by Captain Boomerang (John DiMaggio), Mirror Master (Tom Kenny), and Abra Kadabra (Jeff Bennett); “’Mazing Man (Tom Kenny) in Kitty Catastrophe”, a delightful use of the charming character; and ”The Creature Commandos in The War That Time Forgot” which focuses on a mission to Dinosaur Island and confrontation with the Ultra-Humanite (Jeff Bennett).

The fourth wall is shattered in the final episode when Bat-Mite (Paul Ruebens) pops up and has decided this format is tired and needs to be retired by making the show so awful the Cartoon Network has to cancel it. With Batman, Aquaman (Ted McGinley), and the whole cast endangered, the only one to stop Bat-Mite is…Ambush Bug (Henry Winkler)?

The shows are tremendous fun and if you’ve never experienced them, now’s a good time to find them all.