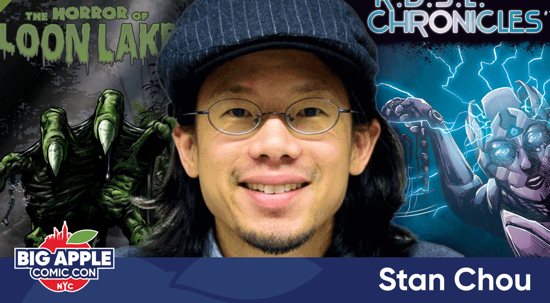 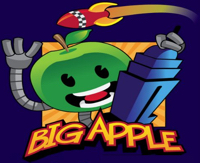 This past weekend was the Big Apple Convention at New York City’s famed Hotel Pennsylvania. Fellow ComicMix columnist Molly Jackson joined me in attending this show as she has for the past four years now. Boy, time really does fly, huh?

The Big Apple Con is a show I’ve been going to for many years. For those of you who are unfamiliar, this is a con run by Mike “Carbo” Carbonaro who has had more close calls with retirement than Cher. I don’t *think* he was retiring this time, but I could be wrong.

Anyway, his shows tend to attach some big names from the old guard in comics like Jim Steranko and Ramona Fradon, as well as young up and comers like Mindy Indy and Stan Chou. In the past I’ve gotten to meet people like Herb Trimpe, who is no longer with us, George Pérez, and Chris Claremont back before he was charging for signatures. That’s not a crack on Claremont, by the way. Nearly all the X-Men comics at this point and many of the movies are in part or entirely based on his work so if you can’t shell out a few bucks for a signature you might be trying to flip on eBay anyway, then you can get by without his signature on your comic. I’m pretty sure a firm handshake is still free with most creators, but don’t get carried away. 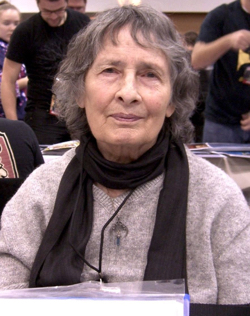 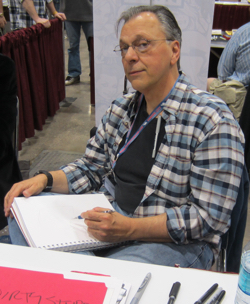 This year the big draw was Stan Lee. Well, it was supposed to be Stan Lee. He unfortunately fell ill and had to cancel. We all wish him a speedy recovery. Stan regenerated into Jim Lee, who flew in for a signing on Saturday, and Frank Miller was the big cheese for Sunday. As disappointed as I’m sure some comics fans were that Stan Lee couldn’t make it, if Jim Lee and Frank Miller aren’t enough for you on top of everyone else who was there then I just don’t know what to tell you.

Molly and I only attended Saturday of the show. Previously, the Big Apple Con was a one day show and we figured we could get almost everything done that we wanted in one day. As much as I would have liked to see Frank Miller, I’m sure another opportunity will arise. I wasn’t sure if I wanted to pay that much for an autograph this past weekend either.

We had a nice time overall. Yes, we agreed we liked it best the one year it was at The New Yorker Hotel down the block and that it’s hard to walk around some parts with the crowd congestion, but Molly and I together make pretty good nitpickers. Some of the highlights for us were picking up original art from Ramona Fradon and getting to chat with her briefly. I’ve got a couple of sketch covers done from her over the hears, but I splurged on a nice piece she brought from home. Molly picked up a couple of smaller pieces herself. As a side-note, Ramona is an incredible pop artist whose influence can be seen in comics right through to today. If you’re unfamiliar, please consider picking up The Art Of Ramona Fradon digital book or the hardcover and learn all about her career and see so much of her gorgeous art.

The Art Of Ramona Fradon includes a long form interview with her conducted by Howard Chaykin who was also in attendance this past weekend. I’ve gotten to meet Howard a couple of times before and this time was no less interesting. Previously he had recommended the prose novel It’s Superman by Tom DeHaven at a Q&A which I read and absolutely loved. This time the topic of conversation would be deemed controversial to most. I’m not going to tell you what it was about. You’ll just have to go to a con he’s at and maybe if you’re good (not nice – good) he’ll tell you a good (not nice) story.

We got a chance to catch up with Stan Chou at the show and see what he’s been up to. He was previously at Double Take, but since they wrapped up production he’s been doing more freelance work. He gave me a copy of a comic he put out with writer Patrick McEvoy, The Darker Region. Basically, the premise is classic horror movie monsters in space and contains three different stories. What really stands out here in that Stan Chou goes out of his way to make the art style different in all three stories contained here. If you’re not familiar with Stan’s work, the link earlier goes to his Twitter page. Check it out.

Molly and I ran into a lot of other people including Mindy Indy, Todd Matthy, Dennis Knight, Bob Camp, Reilly Brown, many of the people we’ve seen waiting in line with us at signings over the years, and more. It was a good day all around. If you only go to the big shows, it’s worth checking out some of these smaller conventions. And if you’re the type that’s more into the indie comic zine fest scene, there are plenty of indie comics creators at a show like Big Apple Con that need support too.

The 2017 convention season is really just kicking off, so start looking up shows, marking your calendars and putting money aside if you can. There are a lot of shows to come and this is sure to be an interesting year ahead of us.