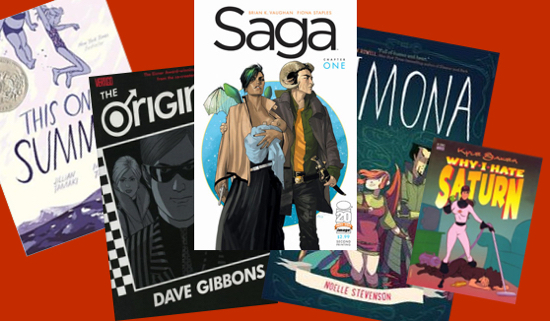 You know that person at your high school reunion, the one who complains loudly about how hard she has to work to maintain her city place, her country house, and her condo in Bermuda? And how she can’t find good help anymore?

I’m about to be the comics industry version of that person.

When I first agreed to be a judge for the Eisner Awards, I mostly thought I would get to read a bunch of comics, have opinions, and get to show off. Utopia, right?

I had no idea.

I mean, I read a lot of comics. I spend $50 to $60 on an average week, sometimes more, plus I’ll order graphic novels online when I happen upon something appealing. I follow reviews and Top Ten lists. Every week, I try to find at least one new title to sample. I try to champion diversity in the medium, both in the kinds of creators who get work and the kinds of stories they tell. The least I can do, if I’m going to talk the talk, is to walk the walk.

And boy, are my feet killing me.

I knew I wasn’t reading everything. I knew there were several new generations of creators that I didn’t know about and who were working seriously on books that challenged my assumptions about what comics could be. I just hadn’t considered how many different directions they could go.

Twenty years ago, I used to joke that comics was the only entertainment in which the term “alternative” referred to the semi-autobiographical stories of straight white men. I mean, really, rock’n’roll had more diversity, Broadway had more diversity (and off-Broadway even more, and get out of the city and anything could happen). Poetry, ballet and modern dance, opera, orchestras — all had more diversity in their farm teams, if not on their marquees yet.

Comics has caught up. Comics might be doing better than the rest.

There are all kinds of new stories, too. Yes, autobiography is still a large (and entertaining!) category, but there are many other kinds of non-fiction. Some of these books seem to want to be textbooks, but a lot are just the graphic-story equivalent of the rabbit hole we descend when we start to look up stuff on Wikipedia.

There are adaptations of prose novels and short stories, weird shaggy dog gags with perfect bindings, and even a few how-to books.

Every day, I try to read one or two. The pile on my coffee table isn’t getting significantly smaller, but I hope to get through at least the most discussed book before the committee gets together at the end of April.

So, if you’ll excuse me, I have to go and read some of the free books I was sent. It’s a tough job, but somebody has to do it.