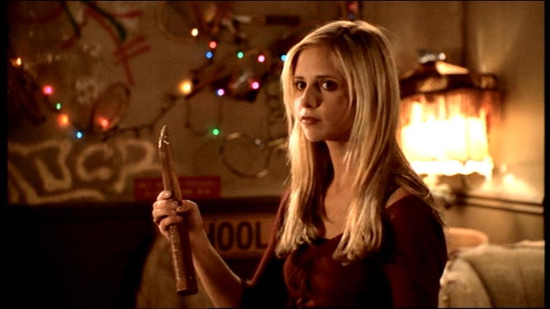 Today is A Day Without A Woman, a demonstration of solidarity to show the need for human rights for all. Throughout the country (and perhaps the world), you will see women wearing red, not spending money, and not working to protest gender inequality.  I admit I was torn about having a column posted today.  I respect today’s protest, and I am taking part in the ways that I can.  Still, I wrote this column before today, and I felt very strongly about marking the 20th anniversary of a strong woman who inspired me, Buffy the Vampire Slayer.

Back in 1996, I remember the excitement when I saw the commercial for the new show, Buffy the Vampire Slayer.  My sister and I loved the original movie, in part for the camp, in part for the wit, and in part for the female hero in the title. The next time she called home from college, I remember grabbing the phone to tell her that Buffy was back. Little did I know that the Buffy and the WB were about to shape my entire generation.

When Buffy helped really launch that channel on March 10, 1997, it was the beginning of an era. When I was in high school, everyone watched the WB. That singing frog was on everyone’s TV, we all knew about the love triangle of Percy, Joey, and Dawson, and Buffy was an icon; at least, she was to me. I did have a single friend tease me about watching Buffy; by season 3 I had him hooked. I still don’t let him live that one down.

The best part of Buffy for me growing up was that she was a year older than me, in a critical time of my life: high school. She was getting ready for prom when I was just a junior. Buffy and her scoobies survived high school when I questioned if I could make it through junior year. Her first year of college coincided with me applying for schools. When she entered the working world, I was at the point of college to start thinking about my future employment. Buffy got through those hurdles and set the example that I could as well.

It never mattered that Buffy was the creation of Joss Whedon. He wrote a strong female role model when others only wrote set pieces that had lines.  He was able to channel a teenage girl surprisingly well, and 20 years later, he is still celebrated for it.  Whedon continues to fight for women’s rights through Equality Now.I owe more to Buffy and Joss Whedon than most people even know. Truth is, without Buffy I wouldn’t be here on ComicMix. I was a casual comics reader as a kid (I would refuse to get on an airplane without an Archie digest in hand) but it was never a serious passion. When Buffy came to comics with Season 8, that was my true gateway into this world. Dark Horse made comics so inviting, that I simply stayed. I delved in with two hands and never looked back. In fact, the reason my site [insertgeekhere] was started was so my writing partner and I could defend Dawn, Buffy’s little sister, after we heard some truly horrible things shouted at her during a sing-a-long event. And writing about geek culture has helped me express myself in ways I never thought possible.

So on today, a Day Without a Woman, I can only reflect on the women that gave me some of the best pieces of who I am.  A day without these women means a day without myself.  In real life, my mother gave me my love of books; my grandmother gave me my snarky attitude. My rabbi showed me that striving to answer a question is its own reward. And in fiction, Captain Janeway gave me a role model of strength and grace (plus my love of coffee).  And finally, Buffy gave me the very reason and drive to write and express myself.

So all I can do today is quote Buffy herself. As the slayer said, “Make your choice. Are you ready to be strong?”