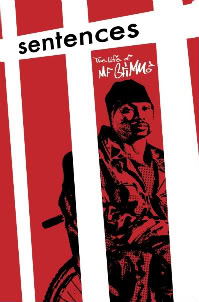 While comics is their common thread, Joss Whedon, Jodi Picoult and Percy Carey are each coming into the industry in their own way. Whedon we all know about, and most are familiar with Picoult, who was actually the first female writer on Wonder Woman (not Gail Simone, as the New York Times wrote) after having a successful run of novels.

Carey is the most unique, having gritted his way to superstar status in the underground rap scene, only to fall into dealing drugs and constant gang fights that eventually left him crippled.

For Percy Carey, who raps under the stage name MF Grimm, writing graphic novels meant not just learning to speak a new language, but also appreciating the value of the story he was telling. While Whedon and Picoult were dealing with the fantastic, Carey’s graphic novel, Sentences, is an autobiographical account of the shooting that left him paralyzed and confined to a wheelchair.

The idea that he could tell his story as a graphic novel came to him after he discovered American Splendor, a series of comics based on author Harvey Pekar’s life.

"Once I came across American Splendor, it convinced me that I wanted to take a chance and step in the medium of graphic novels. I just have a lot of respect for the form," says Carey.