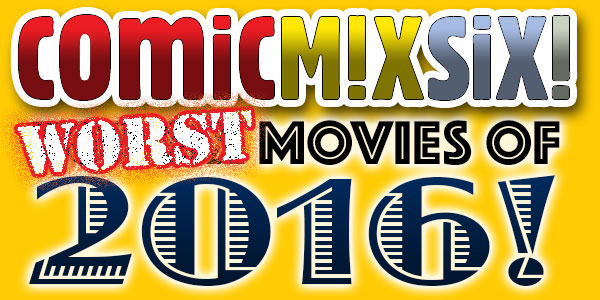 Last time, I covered the best movies of 2016— and now it’s time for the flip side. Brace yourself.

#6: Batman v Superman: Dawn of Justice – In my top list I praised Captain America: Civil War for being a kind of triumphant pinnacle of fan service in comic book movies. Batman v Superman might well be the dark mirror of that idea: fan service run completely amok.  Characters are crammed in this movie every which way along with vague concepts, half-formed ideas, and every frame of iconic superhero artwork Zack Snyder has ever seen.  Batman v Superman is depressing both in tone and failed potential.  The Superman that Snyder puts on the screen is the worst interpretation of the character I’ve ever seen, impulsive and violent without a trace of warmth.  Only the moderately badass Wonder Woman sequences save this movie from higher placement on this list, and they desperately need to right this ship before they consider putting a Justice League movie on the screen.

#5: Allegiant – Allegiant is barely a movie at all.  It’s supposed to be setting up for some grand finale, but it has so few plot points to actually dole out that we end up just endlessly spinning.  There’s probably a way to do a movie like this in a better way, perhaps by diving deeply in to the characters or by some distracting world building, but even writing that I realize I’m talking about a filler episode of an hour-long TV show and not a feature film.  Allegiant was a shallow cash grab by a cynical studio and they seem to have torpedoed the entire franchise with their greed.  A more optimistic version of me hoped that this would be the end of splitting books in to multiple movies, but that doesn’t seem like it’s in the cards now that one Harry Potter reference book is poised to be turned in to five movies.

#4: Independence Day: Resurgence – I’m eagerly awaiting the other shoe on Independence Day: Resurgence to finally drop and to learn that the en tire movie was some sort of experiment in programming a computer to write a summer blockbuster.  I would much rather that be the solution rather than a human being (or several teams of human beings as credited) sat down and wrote a movie that so transparently tried to tick every box on some sort of magical checklist.  Sequel to a beloved film of the primary moviegoing populace’s childhood?  Check.  Jettisons the most expensive actor but brings up the character enough to try and get that secondhand rub?  Check.  Crucial character is Chinese to appeal to the essential audience there but don’t give her a big enough part to scare off the more xenophobic among the domestic audience?  Check.  Bigger badder explosions, damn the reduced emotional impact?  Check.  While it’s certainly possible a group of people made a movie this bad I would certainly prefer to find out it was a rogue AI trying to bring down humanity or something.

#3: The Angry Birds Movie – I was delighted by many animated movies.  Two made my top six list and if we did ten over here at ComicMix I likely might have had space for two more.  Children’s entertainment is at a fantastic place as most of the studios seem to have learned not to talk down to kids and to put effort in to their work in exchange for almost unheard of responses.  The Angry Birds Movie is a movie that shows that not all lessons are learned by all people.  Angry Birds is a barrage of ideas that presents no internal consistency or emotional stakes.  Everything is 10 seconds away from being a poop joke and in 2016 that simply isn’t good enough.  The fact that the movie ends with an endlessly long sequence reacting the mobile phone game everyone was sick of five years ago Is the final nail in the coffin.

#2: Sausage Party – Sausage Party would be a solidly above average sketch on Funny or Die if it ran for seven minutes.  They have an interesting premise, three mediocre jokes, and an hour and a half of garbage.  There are times when it’s offensive and that’s awful, but also there are interminable stretches when it’s just unbelievably boring.  I felt like Sausage Party was holding me hostage in the theater until they had a chance to spit out every terrible idea they had, culminating in the orgy sequence that felt more like a desperate attempt to seem edgy than to blow off any narrative or comedic steam.

#1: Norm of the North – I have never seen a movie in the theaters as bad as Norm of the North.  Honestly, that might be giving it too much credit as it certainly has to be in the conversation with cult classics of terrible cinema like The Room and Troll 2 when we discuss the worst movies ever made.  It’s an incomprehensible film that changes narrative focus randomly and without justification and seems to just be hoping we don’t notice.  There isn’t a single joke that hit with me.  The character design and animation are so bad that I have to believe that dozens of student films this year looked better.  I’m angry that someone paid for Norm of the North to get made while so many talented people must be struggling to get by in the animation industry.  It’s offensive that this exists in the same medium as Frozen or Zootopia or even Shrek.  Norm of the North is the worst of the animation industry, the film industry, and the worst piece of entertainment I’ve ever seen marketed to children.