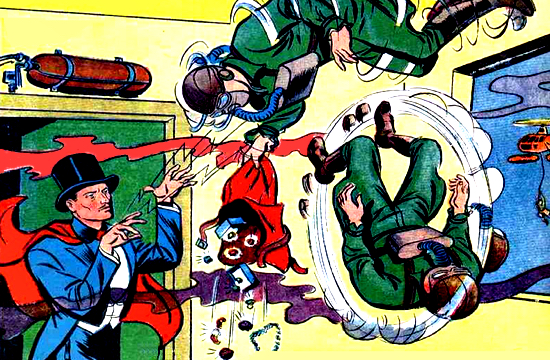 Enough – hee hee – merriment. Where were we? Oh yeah. I sort of vaguely suggested that I might continue last week’s discussion of Doctor Strange, who has been a Marvel Comics character since 1963 and currently is the eponymous star of a big screen movie, the box office champ for the second week in a row (and for a little extra coin you can see this champ in 3-D! And don’t tell me, mister, that life is not a party.

Here I’m going to mention that ComicMix’s resident film critic had a few reservations about the flick and I hereby bow to his acumen; oh and by-the-way he has become one of my favorite reviewers, which strikes me as a bit wonky considering that he’s considerably younger than my youngest child and I’ve known him all his life and a hefty portion of mine and aren’t authority figures supposed to be aged and wizened just like The Ancient One in the Doc Strange yarns and… 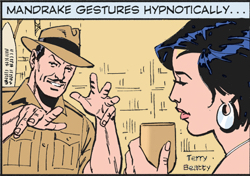 Here we are, having survived another digression, back in Doc Strange turf. Yes, the doctor. A conjurer.

His ilk are sprinkled throughout the history of comic books. Before Superman jump-started the business in 1938, a comic strip featuring Mandrake the Magician appeared daily and Sundays in the paper my parents had tossed onto the lawn every day. Mandrake was created by Lee Falk, a St. Louisan, and first appeared in 1934. I’m pretty sure that when I read or at least looked at the strip as a kid I understood Mandrake’s modus operandi: the captions told me that Mandrake “gestured hypnotically” and illusions appeared to gebollix the bad guys. It was an okay gimmick as long as you knew little or nothing about hypnosis and in 1934, who did?

A couple of years later, Lee Falk created The Phantom. The “ghost who walks” – that Phantom – but since he is not a magician, we’ll ignore him.

And speaking of magicians… As a genre, they were never awfully important in comics, certainly no rival to superheroes. Arguably, the most prominent of them was another doctor, surnamed Fate. He could be mistaken for a superhero; he looks superheroish and he’s invulnerable and strong and he can fly and do other stuff. Mostly, he uses sorcery that doesn’t seem very defined, but it doesn’t have to be at long as it’s used judiciously.

About that (those) costume(s): one of the nifty things about the doctor – Strange, not Fate – is that his clothing is definitely a costume, but one that suggests magic. And there are his powers; in a way, he’s a first cousin to Iron Man as both spend a lot of time shooting energy of some kind from their hands – very visual and so very appropriate for comics and, oh heck, we’ll admit it, also to movies. Whoever Doc Strange’s haberdasher was, hooray!

We’ll end with what you can consider another digression, a couple of lines from Lord Byron:

And if I laugh at any mortal thing

‘Tis that I may not weep.