REVIEW: On Story-Screenwriters & Filmakers on Their Iconic Films 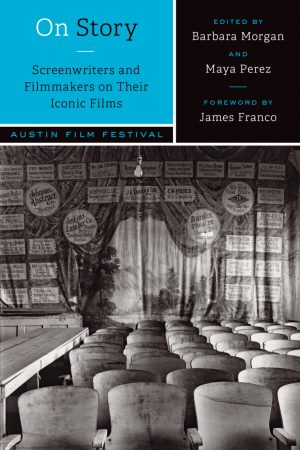 On Story – Screenwriters and Filmakers on Their Iconic Films
Edited by Barbara Morgan and Maya Perez
247 pages, $20, University of Texas Press

The Austin Film Festival is a great place to watch films and hear from filmmakers as co-founder and Executive Director Barbara Morgan assembles a winning lineup of producers, directors, screenwriters, and performers to come talk about their craft.

Thankfully, Morgan and Maya Perez, producer of the Emmy-winning PBS series Austin Film Festival’s On-Story, have collected an assortment in a too-short collection, On Story – Screenwriters and Filmakers on Their Iconic Films. After a James Franco introduction, we get the best from the last 20 years’ worth of conversations in transcript form.

Among the highlights is the Conversation with Shane Black, David Milch, and Sydney Pollack, where the diverse filmmakers talk character, plot, structure, theme and favorite moments from across their careers.

Similarly, genre devotees will appreciate the focus on comic book adaptations during the A Conversation with Michael Green, Ashley Miller, and Nicole Perlman, who have given us X-Men, Heroes, and Guardians of the Galaxy among other projects. The talk between John Milius and Oliver Stone, sadly, barely touches on Conan.

Callie Khouri provides a lot of details behind how Thelma and Louise came together and the unexpected manner in which is got from handwritten script to studio production and its aftermath for her career and the feminist cause.

Comedy fans will find the creation process for Groundhog Day interesting as Harold Ramis talks on his own and then chats with Danny Rubin, the man who first had the notion that became the film’s core. And for thriller fans, Jonathan Demme and Ted Tally walk you through the writing of Silence of the Lambs.

Perhaps the most interesting dissection of a film is when Ron Howard, Jim Lovell, Sy Liebergot, John Aaron, Jerry Bostick, Michael Corenblith, Al Reinert, and William Broyles Jr., discuss the making of Apollo 13, considering most of the speakers were the astronaut and engineers who actually made history and how Howard used them as advisors.

Would-be screenwriters will find the anecdotes and process discussion fascinating while ore casual students of film will find the majority of the conversations entertaining reading. It’s not a How To book by any means, but a series of discussions on the process and business behind the films. You came away impressed by their thoughtfulness and by how no two films go from idea to screen in exactly the same way.