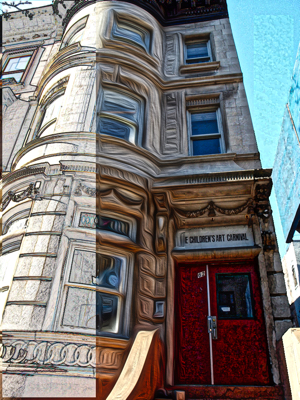 I was attending The Pratt Institute and needed all the bank I could get. Pratt’s one of the world’s great art schools and cheap it was not. I had to come up with most of the tuition because no one talked to me about how financial aid went away if grades fall below a C.

I was a poor black kid from the projects talks like that rarely happen in inner cities. Those lucky enough to raise above our assigned station in life have to fend for ourselves. Our talks revolve around staying away from drugs, gangs, and cops.

American families middle class or above think nothing of seemingly little things like dad or mom talking to them at dinner about their college life.

Mum: My dear sweet Reginal you’ve many things to look forward to while at college!

Reginal: What were some of your favorite things? Do tell mummy!!

Mum: Why raindrops on roses and whiskers on kitten’s bright copper kettles and warm woolen mittens brown paper packages tied up with strings don’t drop below a C, or you’ll have none of those things.

My freshman year I had no idea what to expect there was no “when I was in college” talk. For most poor people there is no talk of college, period. Most of the people I grew up with had no father in the house. My older sister, mother or grandmother – none of those people went to college.

“I can’t believe he’s related to you.”

Betty Blayton Taylor said to my cousin William T. Williams. They were on a phone call discussing my employment. He politely listened as Betty told him how I jetted at 4 pm on the nose from the Children’s Art Carnival how loud I was and assorted other things she saw as problems.

Betty, an acclaimed artist, co-founded the Children’s Art Carnival (CAC) where thanks to my cousin I was working that summer. Her partner at the Carnival? The Museum of Modern Art (MOMA).

Betty was a young, black woman and that, dear friend, is a triple minority. Yet by sheer force of will and a real life super power, she created a life experience in the arts for thousands of children of color. She did that with the full ($) weight of one of the most prestigious arts institutions on the planet.

Then she convinced them to set the school up in Harlem.

The odds of a pulling that off today?

Doable… but so is Salma Hayek but try as one might the closest they will ever get is cosplay… alone. Back in the day and all through her life Betty Blayton was gangsta. Betty’s superpower?

If made aware of the C rule there would have been no need for a second job so no need to leave at 4 pm every day. Betty didn’t like clock watchers, nor did she think I was funny. She thought I was annoying and wanted me gone.

During her call, Betty told my cousin she was going to fire me.

Not because my cousin asked her not too but because he gave me the information and access to such that allowed me to make a convincing case to stay.

When Betty asked me what I had to say for myself, I used my cousin’s advice, I told her the truth. We had a come to Jesus moment (ask someone black) and although she dropped the hammer on my ass, I kept my job and came away with a friend.

A few years after graduating from Pratt I returned to the Carnival. I wrote the curriculum for what would become the Communications Arts Department and was made its director. That became the foundation for my Bad Boy Studio Mentor Program.

Coming back to the Carnival Betty still couldn’t stand my swagger, but she grew to love it after I made the Communications Arts Department a success. “Keep doing what you do.” Betty said; “It’s ridiculous but I can’t deny it works.”

It worked so well that Betty put my name up to become a board member. Betty now loved me. Her follow board members, not so much.

She was met with such vile feedback I asked her to withdraw my name.

“Michael!” She yelled when I picked up the phone. I’d often get late night calls during what I called her whine moments. “These motherfuckers don’t like you but have no problem using what you’ve done when asking for funding! It’s just ridiculous!!”

FUN FACT: ‘Motherfucker’ and ‘Ridiculous’ were two of her favorite words. This from the woman who not only founded the Art Carnival but co-founded The Studio Museum in Harlem.

The More You Know…

“They keep asking me why do you have to be so loud?”

She said this raising her voice mid-sentence to imply loudness. This cracked her up. Me? Not so much. I was miserable, having already told my cousin I was going to be on the board.

You know what I told them?” Betty said.

“He’s loud so those kids can hear him!”

She hung up but two days later a vote was taken, and I became a board member.

My relationship continued long after I left the CAC, no longer being able to justify spending so much free time away from my wife. On top of that, I stopped accepting a CAC paycheck insisting the money go to the programs. Try telling your wife that little tidbit. Ha! I never did. Ha!

She left me anyhow.

When I made the move to L.A, I’d speak to Betty often. Last night I talked to her for a few and remembered a call from about a year ago when Betty called about a young artist she met on the subway.

“She was reading a comic book so I asked if she knew who you were. She’s a big fan.” Betty said. “So.” I began. “That’s where my one fan is.” Betty took a second to get it then she laughed her infectious laugh. We agreed I’d call the young lady who Betty told me was having a hard time within her household. That often happens when poor kids (black or white) express interest in the arts as a career.

She and I went down memory lane until she asked how my mother was, unaware she had died. She was saddened at the news then she told me “She’s looking down at you very proud of you. You drive people crazy, but you have a good heart you’re a good man.”

Good man? I hope so.

Drive people crazy? Without a doubt.

Good heart? Some days, but not today.

Today my heart is broken.

Basil, one of Betty’s Carnival Kids, contacted me to tell me Betty died a few days ago.

As I sit here sobbing, I realize so am I.

I have no doubt if I would have lost the CAC job Pratt would have followed. No CAC, no Pratt, Bad Boy Studios, Milestone or Black Panel. Odds are I would have returned to the projects. Best case scenario I’m a security guard. That was my second job in college. It gets a bad rap from some, but it’s noble career, and I loved it.

Worst case scenario, I’m dead or in jail. There but for the grace of God…

Betty was a mentor and a friend not just to me but to countless artists who found their voice because of Betty. She died over a week ago, but I still talked to her last night.

Betty loves to talk to great people, and she won’t find a better group of people than are on that bittersweet list.

Anyone who thinks otherwise all I can say is that MOFO is ridiculous.