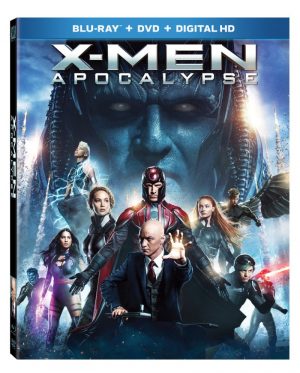 One of the enduring reasons behind the X-Men’s popularity has been the writers and artists exploring being a mutant as being a metaphor for some aspect of the real world. It fueled the comics for decades and informed the 1990s animated series to a degree. It even was the foundation for the first Bryan Singer-directed feature film. Somewhere along the way, the theme has been shoved to the side in favor of action and pyrotechnics.

After the soft reboot via X-Men First Class, Singer and writer Simon Kinberg have been edging the mutants towards general acceptance. After saving the future and the world from disaster in the previous film, X-Men: Days of Future Past, now we have them as generally accepted members of society. So, where do you go from here? You use them as Earth’s first defenders in the loud, messy, and ultimately dissatisfying X-Men: Apocalypse.

Having reset the timeline, tossing everything from third film in the series, the one not directed by Singer, we have a team of mutants in training at Professor Xavier’s School for the Gifted. It’s now the 1980s and while many mutants have benefitted from Xavier’s (James McAvoy) benevolent approach to co-existence, not everyone has been so lucky and we early on meet four seeming outcasts from society. They are ripe for the picking which is good because here comes the resurrection of purportedly, Earth’s first mutant, En Sabah Nur  a.k.a Apocalypse (Oscar Isaac). He emerges in a world he does not recognize and immediately declares it in need of a redo. After watching an episode of Star Trek about man rejecting a god, he seeks out four new acolytes, his “horsemen” and finds them in Angel (Ben Hardy), Storm (Alexandra Shipp), Psylocke (Olivia Munn), and a player to be named. Rescued from this mess is Nightcrawler (Kodi Smit-McPhee).

Meantime, Jean Grey (Sophie Turner) is having nightmares that literally rattles the mansion, causing her concern and warning knowing audiences the next film will be a second round of The Dark Phoenix Saga. We also have Scott Summers (Tye Sheridan) arrive at the mansion, a sullen teenager hating his newfound optic powers. 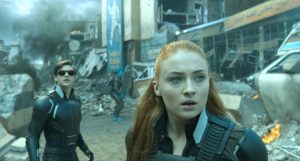 We apparently can’t have an X-Men film without Magneto (Michael Fassbender) and he has the most tragic story arc. After dropping from sight, he has married, fathered a daughter, and is quietly working in a Polish factory until he’s forced to use his powers to save a life. Rather than thank him, he’s feared and hunted. When his daughter is accidentally killed, he loses it, making him ripe for Apocalypse. The notion of magneto being subservient to anyone is a false note here.

Things gather speed and we rush headlong into set pieces that give the characters a chance to strut their stuff but we learn little about them along the way. We bring back Mystique (Jennifer Lawrence), now a legendary ageless mutant and revisit Moira McTaggart (Rose Byrne), reactivating suppressed memories from First Class.

We get to the third act when everything stops making sense. Apocalypse wants to destroy the world and remake it but it’s a world he’s spent no time trying to understand. He does not grasp its population, technology, myriad religions, or the fragile ecology. We’re offered no vision of how he wants this new world to look. Instead, he has his horsemen get to work and we watch the world slowly get pulled apart. Later, after the X-Men inevitably win, the death toll and billions in damages go unmentioned. The mutants’ place in the world is also undiscussed as the status quo is reset although now that we’ve seen what Jean is capable of, we have every right to be worried for her and the world. 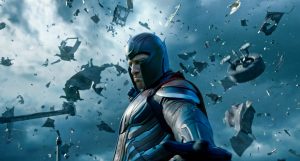 Ultimately, it’s a solid entry in the series but it feels underdone and not thoroughly thought through. It’s entertaining to watch and wearying to consider after the lights go on.

We get fine performances from the leads but the cast is so oversized that too many fine actors are totally wasted, starting with Oliva Munn, who is visually perfect as Psylocke. The story could have been sharper but after watching the deleted and extended scenes, with Singer’s commentary, no real narrative was left on the cutting room floor.

The film, out now as a Blu-ray, DVD, and Digital HD combo pack from Twentieth Century Home Entertainment, has an excellent AVC encoded 1080p transfer in 2.40:1 and you can hear every boom and pop of special effects thanks to a lovely DTS-HD Master Audio 7.1 track.

As mentioned above, the special features include Deleted/Extended Scenes (28:11), a Gag Reel (8:20), Wrap Party Video (4:46) and the requisite X-Men Apocalypse: Unearthed (1:03:58), the behind the scenes multi-part feature where you understand what went into writing and making the film. Additionally, there is Audio Commentary by Bryan Singer and Simon Kinberg, Gallery, Concept Art, Unit Photography and Theatrical Trailers (7:15).